A Builder of Fields and Dreams

The baseball diamond at Martingrove Gardens Park gained a hall of fame title during a renaming ceremony in memory of one of Etobicoke's greatest champions of the amateur baseball, Lloyd McConnie. On Saturday, September 4, 2008, the Lloyd McConnie Memorial Field was tagged after a man who dedicated much of his life to the ball diamonds of Etobicoke, said former Martingrove Baseball League president, Irene Cullum.
"Lloyd McConnie was a baseball man dedicated to player development and facility improvement at the grassroots level for more than 30 years," she said of the day trader by profession, diamond keeper by passion. "He touched the lives of thousands of young ball players and and baseball coaches in the Etobicoke community and across Ontario". McConnie died after a brief battle with cancer in December, 2007, but not before he left his mark, both literally and figuratively, on local baseball fields. Touted as a "true friend to baseball," McConnie was best known for his contributions to the upkeep, modification and updating of Martingrove Baseball fields. But he was also was instrumental in lobbying the city for a diamond at Centennial Park and "was involved in the design of both the Carmen Bush and Centennial fields" according to Cullum.

Association, there wasn't a baseball field at Martingrove that was not maintained by McConnie, Cullum said of her friend of 16 years, who she said liked to call himself "the man behind the president. "He is very, very much missed on the fields. You'd always see him there, and he wasn't just grading or drawing the lines," she added. "There wasn't a day you wouldn't see him just walking around on the fields, and if he saw a child playing and that child wasn't holding the bat properly, he'd walk right over and say 'no sonny, that's not the way' and he'd show him how to do it right."

That meticulous nature carried over to fields McConnie tended to as well, said Brian Cormier, a longtime friend and current vice president of the Etobicoke Baseball Association. "He was extra fussy in laying out a diamond, I can tell you that," he said with a laugh. "But he put in a lot of time and was very helpful to coaches. He had a hard exterior sometimes, but always a soft heart."

Born in St. Vincent, British West Indies on Aug. 19, 1928, McConnie's native game was cricket, not baseball, but over the years he became very knowledgeable of the game, Cormier said. It was his devotion to the game, he added, that lead to both the naming of the annual Lloyd McConnie Rookie Ball Tournament held every July 1 weekend for the last three years - an event McConnie himself was very proud of in his final years - and now the memorial field. "He was never too far from a field," saud Cormier.
-Cynthia Reason
Etobicoke Guardian 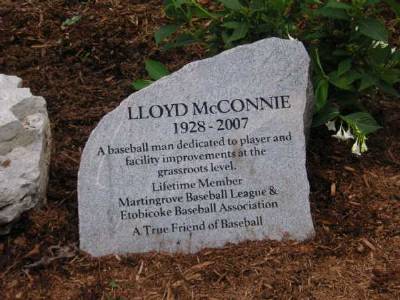 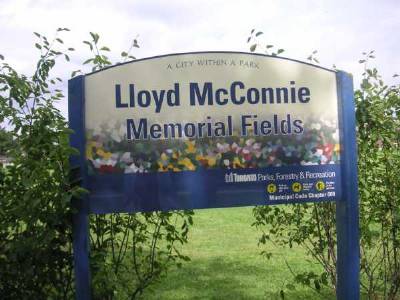