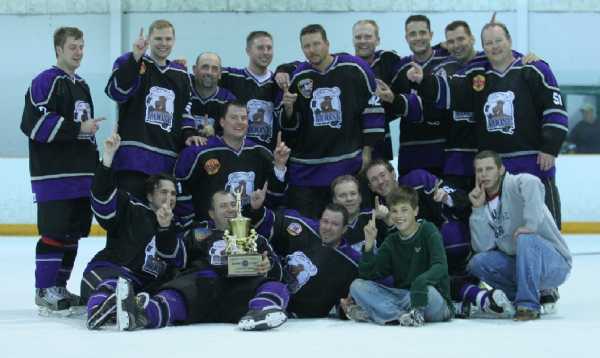 TORONTO -- Sticks, bodies, and sweat were flying everywhere Sunday on the ice in Toronto as the Detroit Moose B team wrapped up its national championship run and beat the Cleveland Icemen 6-5 to carry off the coveted Tier 3 Hockey North America League Championship trophy.

So many moments and so many feats lifted this Moose team to the championship, from Joel Nettleman’s surreal overtime Game 4 goal that sent the Moose into the finals to Rudy Dauncey’s incredible, surprising blue-line slapshot that blasted into the water bottle in the upper corner behind a stunned (defending Tier 3 Champion) Calgary Wolves goaltender.

It wasn’t easy for Moose players, who had to endure playing 5 games in a 40-hour span to grab the League Championship title over the weekend at Westwood Arenas. The Moose were 4-0-1 over the weekend, racking up an impressive 39 goals. The Moose finished with a 20-7-1-1 record this season and ended up 9-1-1 in its final 11 games.

Moose Captain Derek Fowler, tears glistening in his eyes with the Moose team standing behind, accepted the trophy from Hockey North America League President Elliott Root amid cheering fans in the crowd.

The championship run started out as a bus trip of uncertainties for the Moose at Detroit Diesel in Detroit. Together, the team rumbled on a 5-hour trek toward Toronto thinking about the upcoming games, memorizing opponents’ team statistics, talking strategy, and not quite sure what competition level they would be facing. On paper, behind HNA Detroit point leader Alec Lesko, the Moose had outscored and outshot every opponent that they would be facing in the beginning rounds.

And the Moose wasted no time showing its firepower in the opening round, beating the Boston Firecats 10-8 in an intense shootout. The game saw assistant captain Jerry Rogers net 5 goals – three of which came in the first period. Just 12 hours later the Moose blasted 38 shots at the New Jersey Bombers and came away with a 4-4 tie. Later that day, the Moose defeated the Washington D.C. Vipers 14-0 to send the Moose to the semi-final round. Moose goaltender Tom Varcie got his first shutout of the season.

In one of the most memorable games of the year, the Moose faced a high-powered, hungry Calgary Wolves team Sunday morning in the semi-finals. The game also had a scare early in the second period when Moose forward Mark Auger was hit by a slapshot on the chin under his half-shield. Team player/doctor Zach Lewis threaded 12 stitches into Auger and he was out playing three shifts later.

``That kind of determination is what this team is all about and what it’s been about all season,’’ said Lewis.

Facing a 4-1 deficit with just 7 minutes to go in the third period, Moose defenseman Alec Lesko sunk one in the net behind the Calgary goaltender. Two minutes later the Moose added another to make it 4-3 and with only 1:30 remaining in the game, Lesko blasted in one that compares to goals scored among the NHL elite. As Lesko burned down the ice, he stickhandled around three Wolves players. Just as a fourth Calgary player was falling to the ice, Lesko shuffled the puck underneath the man, hurdled him, caught his own pass 4 feet away and took the next 10 strides to deke the goaltender to tie the game at 4-4 and send it into overtime.

Five minutes into overtime, Moose center Joel Nettleman scored the winning goal on an intense scramble in front of the net. Nettleman jumped over toward the right corner and the 15-member Moose team piled on him, fists raised high in the air.

``This is one of those games that you will always remember. It was that kind of game,’’ said Moose defenseman Brian Big Daddy Harlow. Harlow’s intensity was seen and heard on the bench as he helped motivate the team when it was down 4-1 late in the game. ``We worked hard together as a team and we did it.’’

The Moose was able to shut down the Calgary offense behind outstanding play from defensemen Nate Schmoekel, Ron Kruse, Lesko and Harlow. A key third-period breakaway stop by Varcie also kept the game within reach when it was still 4-1.

But there was no time for rest and little time for celebrating. Moose players barely had time to dry out their equipment back at the hotel and they had to be on the ice for the 2 p.m. finals matchup against a tough Cleveland Icemen team.

Cleveland skated hard in the first period, taking a 3-0 lead on three surprise breakaways. But the Moose regrouped after the first and skated with the most intensity and determination all year, slamming in 6 straight goals to take a 6-3 lead late in the third. Cleveland closed the gap, scoring two late third-period goals, but the Moose offense and defense were too much for the Icemen and they held on to capture the championship title.

Offensive stars of the game for the Moose were forwards Ryan Renner, who snagged several goals and assists in the series, Joe Demarte, Curtis Glowinski, Mark ``the chin’’ Auger, amateur Canadian legend Rudy Dauncey, Chris Wrigley, Derek Fowler, Joel Nettleman, and Zach Lewis. Excellent fan support was given by Jean Auger and Sue Derderian, who snapped dozens of game action photos and rallied the team with their cheering. The Moose also got outstanding bench assistance from Andrew Sczczepanski who helped keep everyone focused and the lines moving smoothly.

After a brief award ceremony, each player grabbed the trophy and skated on the ice with it as other Moose players and the crowd cheered.

Afterwards in the locker room, Fowler said, ``I am so honored to have you all believe in this team. You were hand-picked to be here on this first class team. I'm so proud to call every one of you my teammate and brother.’’

`` We played this year in honor of never forgetting those who gave their lives on 9/11 and for the victims that perished that very day. Personally, I wear on my jersey names of Dennis Buckley and Glen Wall from school, ’’ Fowler said. ``We all play with that patch on our jersey and 6 years later, fallen heroes and families of the victims are not forgotten.''

The Moose team also gave Fowler a standing ovation in the locker room after the game to thank him for his dedication this season, support for the teammates and their families, organizing team charity events, setting up the bus trip to Toronto, and for his own personal financial contributions to the team during the season and in Toronto.

``The guy just has a heart of gold. He's the most dedicated and best captain a team could ask for,'' Harlow added. ``After his family, Derek's life is hockey and this team.''

The Moose team will look to defend its title in the 2007-2008 HNA hockey season, beginning around October. Because it won the championship, the team earned an automatic bid back to Toronto next year.