Moose team faces off against hunger 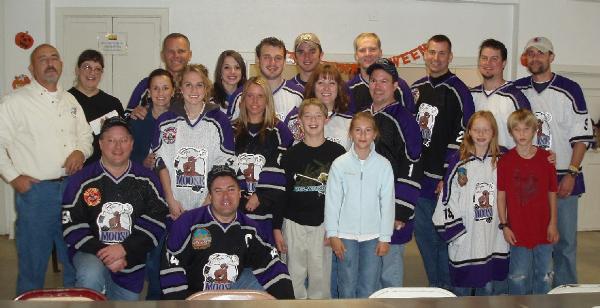 DETROIT -- Alec Lesko held a peanut butter and jelly sandwich like it was a hockey puck; Nate Schmoekel stirred a pot of chili like he was stick-handling down the ice; Brian Harlow wrapped up plastic eating utensils like he normally wraps up players on the ice.

This wasn’t some strange hockey game taking place in the middle of a cafeteria. Instead it was players from the Detroit Moose B team working together to help feed the needy and homeless last weekend at a Detroit soup kitchen.

Ten Moose players, their friends and family members volunteered Oct. 20 at the Holy Trinity Church soup kitchen at Trumbell and Martin Luther King Blvd. in Detroit. They helped serve more than 350 needy and homeless people. The team had some help from a busload of members from the Korean Presbyterian Church in Southfield, MI, which volunteers twice a week at the center.

Armand's Meats of Northville, MI, donated both 40 pounds of meat and 30 pounds of hot dogs to the soup kitchen as a goodwill gesture. The Moose team put in $210 of their own to cover overhead expenses for the day at the center.

This is the second time this year that the Moose team volunteered at the soup kitchen. The team worked there in February and helped serve about 250 people.

The crowd last Saturday was much larger.

``I just want to say thanks to everybody who came here to help out,’’ said Fowler to the volunteers last weekend. ``We’re here today to help these people who are less fortunate. No person should go to bed hungry. We’re here to make a difference.’’

Moose players, their families and other volunteers served the guests chili soup, juice, coffee, salad, rolls, and cheesecake. The meal and service was provided for free. The needy people were allowed to take a sandwich with them before they left.

The team also held a coat drive and collected more than 100 coats and jackets for the needy and homeless. Prior to the guests being served their meal, Moose team players fitted many of them with donated coats.

``This is absolutely great being here,’’ said Harlow, as his niece and son helped him at the center. ``I’m glad to be able to help these people. It’s very sad seeing some of them – like these two cute little old ladies and I saw a young woman with a baby. That was sad to see. We really are making a difference.’’

While the players and adult volunteers helped serve the food, the younger volunteers helped seat the guests. Liz Varcie, 9, daughter of Moose goalie Tom Varcie, said, ``I love being here with my dad and his team to help the people.’’ Her brother Justin, 10, echoed that and was proud of the fact that he personally helped seat 20 needy people at tables.

``When you think about poverty in our back yard and people starving,’’ said Fowler, ``winning or losing a hockey game in an adult amateur league really doesn’t seem that important. Helping needy people is something that this team believes in and we want to help in any way that we can. And we’re in a position to do it.’’

The Moose had its season opener the next day and beat the Detroit Barflies at Melvindale Ice Arena, thanks to a hat trick by rookie forward Brad Lesko. Tom Varcie stopped a barrage of 25 shots in net and allowed just one goal thanks to great defensive play by Nate Schmoekel, Brian Harlow, Alec Lesko Jr., and Ron Kruse. Outstanding forward efforts were by Derek Fowler, Jerry Rogers, Joe Demarte, Curtis Glowzinski, Joel Nettleman, Rudy Dauncey, Mark Auger, Ryan Renner and Pops Lesko. The Moose Fan Club – led by Pat Renner and entourage – also cheered on the team with much appreciated enthusiasm.

The team’s next benefit will be at 4 p.m. Nov. 18 when the Moose is inviting out members from the Wheelchair Hockey League of Michigan group. Moose players will help the wheelchair athletes ``skate’’ during intermission between the 1st and 2nd periods of the game, said Fowler, who has arranged the event. A disc jockey also is expected to be at the game playing music while the wheelchair athletes are on the ice. The Moose opponents that day -- the Warriors -- will also help push the athletes around the ice.

The Moose takes on the Pitbulls this Sunday at 4:30 p.m. at Detroit City Sports. Fowler also said ``family day’’ is this Sunday, which means parking and admission are both free.

Thanks again to the Detroit Moose 2007-2008 sponsors: Harlow Tire in Westland, Double H Manufacturing in Westland, 203 Custom Car works in Ypsilanti, and a group that supports the friends and families of victims of 9/11.