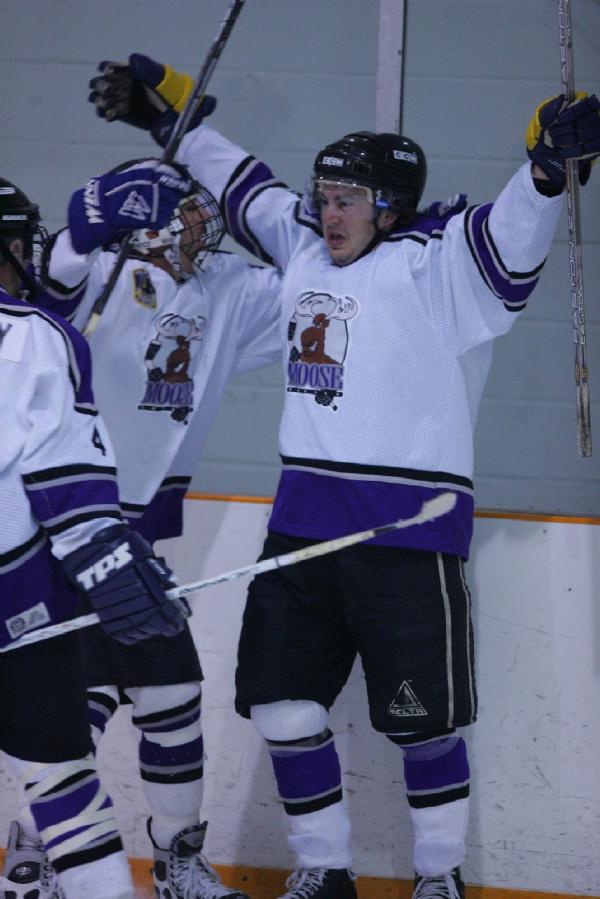 DETROIT – Miranda and Sydney Fowler cheered loudly for their dad as the Moose team captain went up for a faceoff; Liz Varcie cheered loud for her dad after he stopped a puck; Pat Renner and his entourage cheered for his brother Ryan when he assisted on a goal.

And there were a lot more reasons to cheer.

Ryan Renner’s fiancée, Tonya, and his brother Pat held up Detroit Moose signs all game and started the crowd in cheers with each Moose goal and attack down the ice.

``It was awesome hearing that,’’ said Moose Captain Derek Fowler. ``I looked up to the stands and put my hand to my ear because I wanted to hear more. It was a real incentive to play harder.’’

Moose standout Brad Lesko gave the fans something to cheer about with about 5 minutes into the first period. Lesko bobbed, weaved, twisted and spun around Pitbulls defenders and sunk the puck, unassisted, past the Pitbulls netminder. A few minutes later, Amateur Canadian Legend Rudy Dauncey teamed up with Jerry ``the rock’’ Rogers for the Moose’s second goal.

The Pitbulls closed the gap with 3 minutes left in the first when Rudy Perez blasted a 15 foot screen shot past Moose goalie Tom Varcie. But the Moose came back and made it 3-1 when 2006-2007 HNA scoring champ Alec Lesko wristed in his first of the night, assisted by Ryan Renner and Brad Lesko.

`` The Pitbulls came out strong tonight,’’ Fowler said. ``We played a very classy, well-disciplined hockey club. They focused on the puck and kept driving at us all three periods. There were no penalties by either team – and that says a lot about how this game was played.’’

The Pitbulls kept up with the shots, firing 19 at Varcie. The Moose shot 32 times at the Pitbulls netminder.

Brad Lesko figured in the Moose’s next four goals, thanks to excellent passing and support from Alec Lesko, Curtis Glowzinski and Ryan Renner. The Pitbulls made it 8-2 after a pile-up in front of the Moose goal.

Glowzinski nabbed his first goal of the year to make it 9-2. Brian Harlow and Brad Lesko got the assists. Alec Lesko finished off the scoring after Jerry Rogers flicked a pass to him with a couple minutes remaining.

``I know the Pitbulls practiced every week – like we did – and their passing and positioning were excellent. The score was not at all how the game played out,’’ Fowler said. `` Tommy just came up with some great saves in net for us – otherwise it would have been a lot closer game.’’

After the game, the Moose team and family members enjoyed some time together at Pizzapapolis in Detroit’s Greektown.

``It’s great to have the family come out and support the team,’’ said Brian Harlow, who came out with his wife, children and his mother. Harlow’s wife brought their 1-month old baby, Smith, to the game (who, of course, loudly joined in on the ``Let’s Go Moose’’ chants).

The Moose next will take on the Detroit Sabres at 6 p.m. Sunday at Detroit City Sports. A reminder that the Moose invites all fans out to the City Sports Arena at 4 p.m. Nov. 18 when the team takes on the Warriors. The Moose has invited wheelchair athletes from the Wheelchair Hockey League of Michigan to ``skate’’ with the players during the first and second periods. Members from both teams will push wheelchair athletes around the ice.

Thanks again to the Detroit Moose 2007-2008 sponsors: Harlow Tire in Westland, Double H Manufacturing in Westland, 203 Custom Car works in Ypsilanti, and a group that supports the friends and families of victims of 9/11.