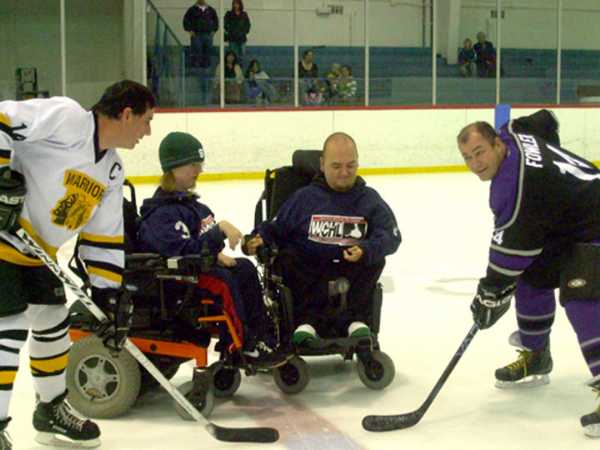 A few months back Concord EMS was approached by the Detroit Moose hockey club as rivals on the ice to team up together with the players from Michigan's Wheelchair Hockey League for an interactive evening of fun on the ice later this month.

Athletes from the Wheelchair Hockey League will ``skate'' with players from the Moose and Concord EMS between the 1st and 2nd periods of their game, said Detroit Moose captain Derek Fowler.

The event will take place at 5 p.m. Dec. 28 at Melvindale Ice Arena in Melvindale. Admission is free.

This is the 2nd annual skating event between the Moose and the Wheelchair Hockey League. Last year, the Moose hosted players from the league to skate with them at Detroit City Sports Arena where more than 100 fans cheered on. Afterwards, players from both teams met with players from the WCHL and enjoyed a pizza party.

Detroit Moose and Concord EMS team players will assist the wheelchair athletes on the ice in the Dec. 28 event and share the fast-paced excitement of wheelchair hockey with everyone.

The Moose team and Concord EMS will also host a pizza party at the arena following the game where the wheelchair athletes, their friends and families can meet both the Detroit Moose and the Concord EMS team players! Players will be ready to sign autographs as well.

To learn more about the Wheelchair Hockey League, please go to www.thewchl.org

The Detroit Moose plays in the A/B division of the USA Hockey league in Melvindale on Saturday and Sunday evenings. The team has participated in numerous charity events around the area over the last few years, including helping feed the needy and homeless at a Detroit soup kitchen. The team also gave out more than 100 coats in a coat drive last year to needy families, it donated toys and money to the Sick Children's Hospital in Toronto last year and participated in the Toys for Tots program.

For more details about the Moose, Concord EMS and WCHL event this month, please click the link at the top of this article.

Next month January 17th the Detroit Moose and their sponsors have asked Concord EMS to join them to take children from Old Village school and the Wheel chair hockey league to a Plymouth Whales OHL home game against Owen Sound.

If you are interested in helping or help donate to this great event of giving back to the community contact:
captain Derek Fowler 734-751-1199 or email dfo193731@aol.com
"Don't wait until tomorrow to make a difference today"