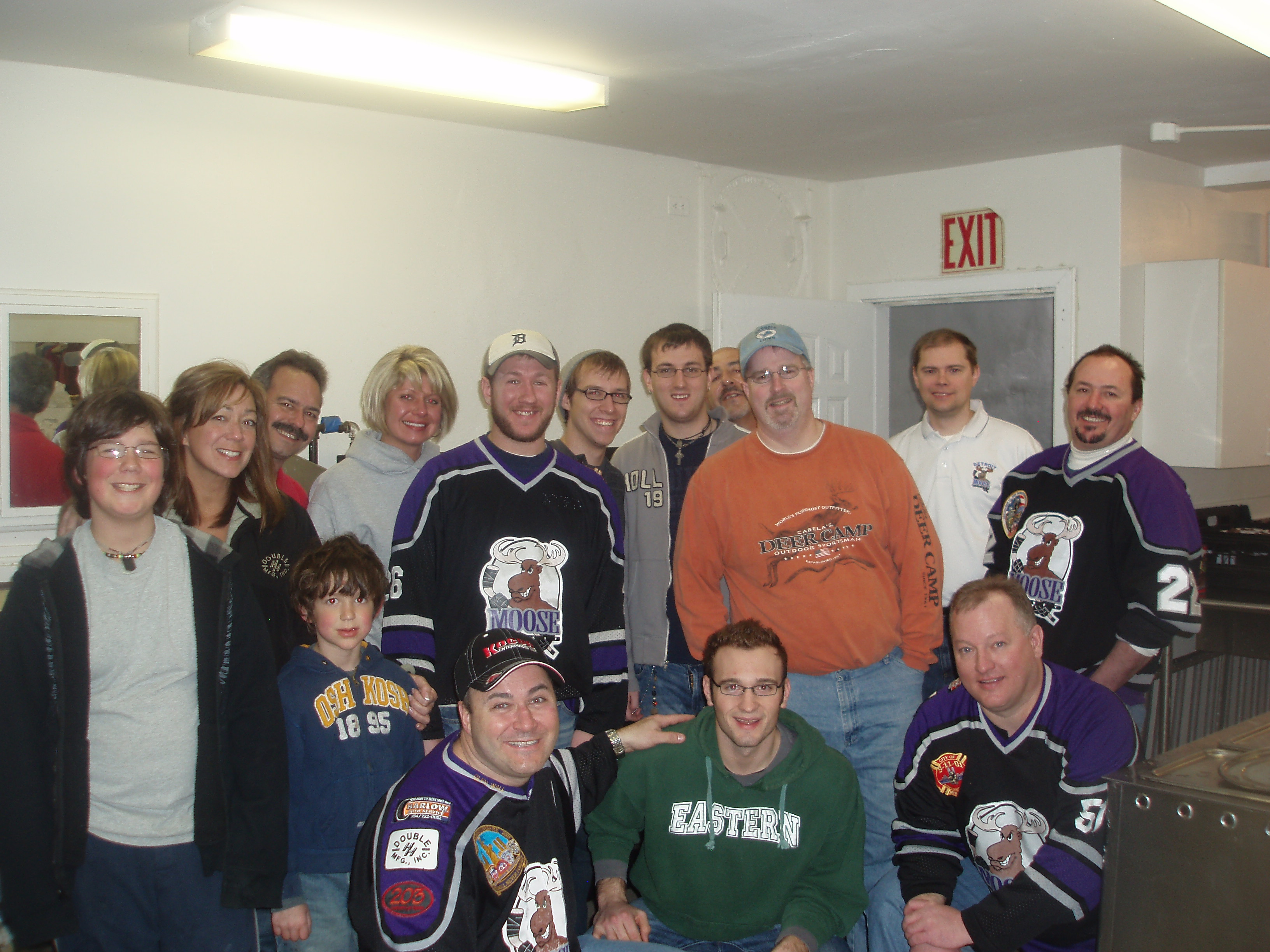 DETROIT – Detroit Moose hockey players held peanut butter and jelly sandwich like they were hockey pucks; Armand from Armand’s meats of Northville and Crystal from Caniff Electric Supply stirred pots of chili like they were rowing a boat up the Detroit River; Charlie Jones wrapped up plastic eating utensils like he normally wraps up players on the ice, takes the puck and scores goals.

This wasn’t out of the ordinary -- this was the Detroit Moose team’s third annual stop to help the homeless and feed the hungry at a Detroit soup kitchen. Players from the team – all dressed in their Moose jerseys – worked together for half a day to help the less fortunate.

Moose players, their friends and family members volunteered March 21 at the Spirit of Hope Church soup kitchen at the corner Trumbell and Martin Luther King Blvd. in Detroit. They helped feed 296 needy and homeless people

The entire team helped make 600 peanut butter and jelly sandwiches about as fast as this team scores goals. The team went out and bought all the food for the kitchen this time and donated $340 for the event. The team also chipped in to pay for the security police for the weekend to help the event run smoothly.

As a goodwill gesture, Armand's Meats of Northville, MI, donated over 40 pounds of meat to the soup kitchen for the event.

``I just want to say thanks to everybody who came here to help out,’’ said Moose Captain Derek Fowler to the volunteers at the event. ``We’re here today to help these people who are less fortunate. No person should go to bed hungry. We’re here to make a difference.’’

Moose players, their families and other volunteers served the guests chili soup, juice, coffee, salad, rolls, and cheesecake. The meal and service was provided for free. The needy people were allowed to take two sandwiches with them before they left.

``This is absolutely great being here,’’ said Moose star player Charlie Jones, ``I’m glad to be able to help these people in a small way. We all know that Detroit is going through some hard times and we can come together and make a difference off the ice and put a ray of sunshine in these people’s day and show some hope.’’

``When you think about poverty in our back yard and people starving,’’ said Fowler, ``winning or losing a hockey game in an adult amateur league really doesn’t seem that important. Helping needy people is something that this team believes in and was built on. We want to help in any way possible. And we’re in a position to make a difference.’’

The team’s next benefit will be an international event. The Moose will return to the Sick Children’s Hospital in Toronto April 24 as they go to a Can/Am Tournament this weekend. The team has collected $2,000.00 and $500 in dental hygiene products. They will read to the children in the library auditorium. The player readings will also be televised throughout the hospital for the children who cannot leave their rooms.

Thanks again to the Detroit Moose 2008-2009 sponsors: Kocur Enterprises, Double H Manufacturing, Pinkney, Greenbaum, MacFarland and Timpner Family Dentistry in Canton,
203 Custom Car works in Ypsilanti, and a group that supports the friends and families of victims of 9/11.

The Detroit Moose plays in the USA Hockey league at Melvindale Ice Arena is Melvindale, MI. The team formerly played in Hockey North America and won the Tier 3 national championship in Toronto on June 3, 2007.