FAIRMONT — After a 78-32 loss to rival Fairmont Senior on Friday night, the East Fairmont girls basketball team wasted no time moving on.

Less than 24 hours after the loss, the Bees returned to their home court to take on Oak Glen. The Bees bounced back, defeating the Bears 49-33 to get back above .500 on the year.

“I thought we responded well. I’m glad we had this game after Fairmont Senior. We just had to forget about it and move on to today,” EF coach James Beckman said. 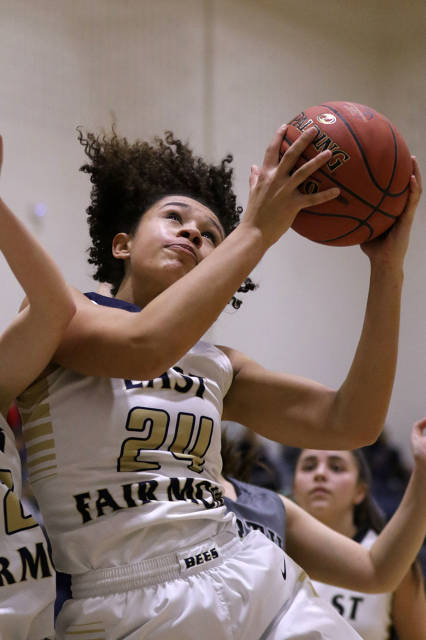 “That’s the great thing about basketball, you have several games a week. Its not like football where you dwell on a loss for a full week. We were able to move on and we were ready to play.”

The Bees never trailed as Mackenzie Tennant scored just seconds after tip-off before Somer Stover scored her first basket to give the Bees an early 4-0 lead. Stover added her second basket of the game later in the first quarter off a rebound and put back to extend the Bees’ lead to 14-5. It was the first of several occasions where the Bees took advantage of second chance opportunities in the absence of Andrews and Kranis.

“We’ve got a couple post players out with injury, so we knew it’d be tough against their post players,” OG coach Scott Wiley said.

“We don’t have much size besides those two (Andrews and Kranis). We told our girls to box out and we didn’t do a good job of it. They got two or three shots in a possession a lot.”

Stover scored 20 points, her sixth straight game in double figures, and pulled down seven rebounds in the win. Thirteen of Stover’s 20 points came in the first half as the Bees led 27-16 at intermission.

OG’s only true offensive spark came from Reece Enochs who scored a game-high 22 points including 6-10 from 3-point range. Three of Enoch’s trays came in the third quarter as the Bears tried to claw their way back into the game.

However, it seemed like every time the Bears appeared to slightly get going, the Bees answered. Avery Pack scored on a rebound and put back on back to back possessions midway through the third quarter to help the Bees extend their lead to 37-24.

Pack, who also took advantage of the Bears’ lack of size several times, fell just one bucket short of a double-double, scoring eight points and pulling down a game high 12 rebounds.

“Somer and AP, I tell you what, they’ve been solid every game,” Beckman noted.

“They’re consistent. When we get our shoting guards back with Kylea (Lopez) and Kierra (Bartholow), its going to make us stronger in the long run. We’ll be ready to play our best basketball come sectional play.”

Kianna Casuccio’s layup off the assist from Tennant with 2:11 to play was the exclamation point as the Bees held on for a 49-33 victory.

“They’ve got Brynne Williams who is a good post player and Ferris and Sturm are tough to defend too. We’re aware of what they have and we’ll be ready to play.”Top of Form