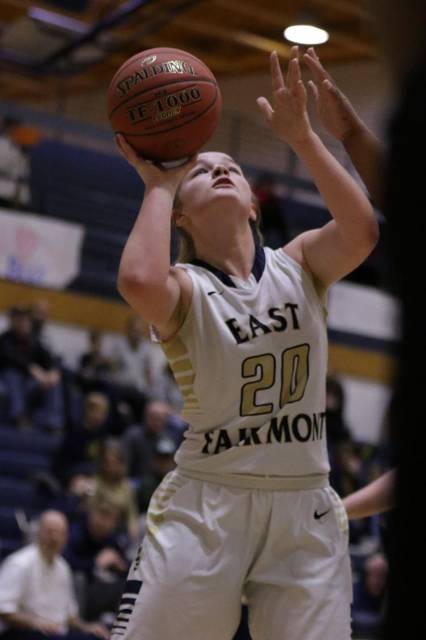 Tatum Oates goes up for a shot during East Fairmont’s win over Weir on Saturday.

FAIRMONT — East Fairmont used defense and rebounding in the second half to down Weir, 52-38, in girls basketball action Saturday afternoon at East Fairmont High School.

The win evened the Bees record at 9-9, while the loss dropped the Red Riders to 5-13.

The Red Riders got off to a great start in the first quarter using a 10-0 run for a 12-5 lead with 1:40 left. Gia Fuscardo and Sophia Mikula led the run with four points each.

However, East Fairmont found the hot hand in the first half in the form of Kierra Bartholow as she connected on three 3-pointers in the first quarter and two of them came in the final minute to close the Weir lead to 12-11.

Bartholow kept finding open spots in the Weir defense to hit two more treys in the second quarter and five in the first half to lead the Bees with a game-high 15 points as EF took a 25-22 halftime lead.

“Kierra lets the game come to her and she shot the ball extremely well in the first half,” East Fairmont coach James Beckman said.

The second half was a different story for the Bees stepped up their game in two areas that was the difference in the game. Defensively, they held Weir to 16 points on 5-of-19 shooting and outrebounded them 20-9 with six rebounds on the offensive end and converted four of them for baskets.

“Our defense and rebounding was like night and day in the second half for us,” Beckman said. “We got to the free throw line more, made more inside shots and we were a completely different team in the second half.”

The main benefactor for East in the second half was Somer Stover, with eight of her 14 points to go along with four of her seven rebounds. Tatum Oates also grabbed seven of her game-high nine rebounds in the second half for the Bees.

But, the main reason for the success of the Bees offensively was point-guard Mackenzie Tennant. Tennant scored only four points but controlled the game throughout with seven assists and three steals.

“Mackenzie controls the game for us and gets everyone involved to take the pressure off the rest of the girls,” Beckman said. “It is good to get back to .500 on the season and we have four regular season games left to get better and ready for sectionals.”

The Bees steadily increased the lead after halftime to as many as eight points on two occasions in the third period with the last being 37-29 on a Stover layup.

Stover had two more inside hoops early in the fourth quarter to give the Bees a double-digit lead (45-34) and Oates provided East Fairmont with its biggest lead of the game, 52-37 on a offensive rebound basket with one minute remaining.

Fuscardo and Mikula paced the Red Riders with 13 points each. Bella Aperfine led Weir in steals with eight and grabbed a team-high six rebounds, while Fuscardo recorded six steals.