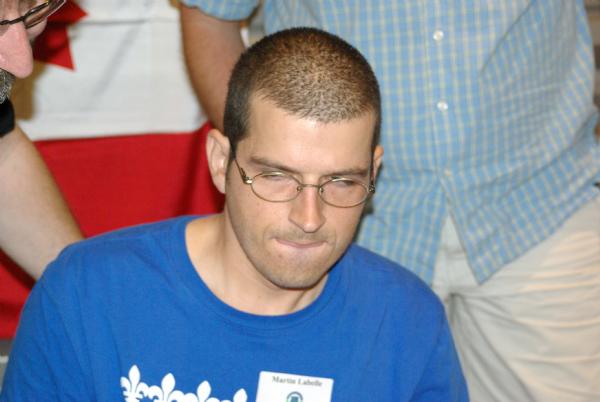 Martin Labelle of Sherbrooke, Quebec, is the NY City International Classic Champion.  Martin defeated Burt Brassard of Quebec, City in the Elite Division finals to win the Empire Cup and $250 in prize money courtesy of the American Philosophical Practitioners Association.  Congratulations Martin on a well earned championship.  You were the best in a very tough Elite division.  Merci beaucoup!
Dave Kraehling of Mississisagua, Ontario finished in third place in the Elite Division.
Len Mecca of Cherry Hill New Jersey defeated John Power in the First Division final.  Len is coming off of his NYCTHA Classic League First Division championship.
The NYCTHA Classic league had three of its players, Lou Marinoff, Roger Owens and Greg Scoma finish in the top 10.  Congratulations to each of them. Lou Marinoff was especially impressive, defeating the top ranked player in Quebec, Patrick Cote, on this day.
Some photos of the tournament, courtesy of CPTHL champ Steve Dowell, can be seen by clicking on "Photo Album" Then clicking on"NY City International Classic by Steve Dowell."
I want to thank all 22 players who showed up and competed, especially those players who were able to stay on to the end and compete for their final ranking position.  While the day was not perfect, it was a special event that was the culmination of a lot of hard work and without your support would not have been possible.
Special thanks to Martin Labelle for his work with the stats and format.  Adam Zawislak for his work--you have always been there for me and really went the extra mile yesterday.  Mike Caponetti for his computer work; The Applied Philosophical Practitioners Association for donating the $500 prize money; Greg Scoma for his all-around assistance and persistence; All of the Canadian players for their participation and support.  Dave Kraehling for his help setting up the scorers table and support.  The Aviator Sports and Recreation staff for their hard work and accommodating us. And of course the great Sal Capizzi for the terrific tournament website and his assistance.  Sal makes great websites and other table hockey stuff like logos and players; visit his site at Capizzi Web Designs at
http://www.members.shaw.ca/capizziwebdesigns/
Finally thanks to all of the players for making a dream/vision that Lou, Greg and I had about putting on a coleco tournament with the best players in the best city in the world, NY City, come true!
colecojohnny@yahoo.com