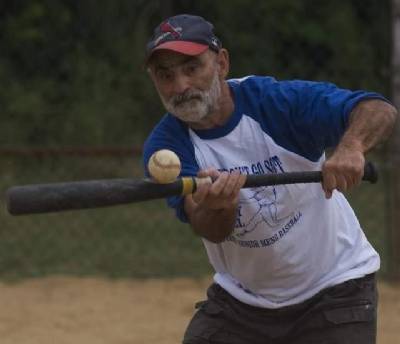 Bill Curzie, 77, founded the South Jersey Men's Senior Baseball League in 1992. 'He really laid the foundation, the groundwork, in creating a league for guys to get together and play baseball,' says the league's president. / JOSE F. MORENO/Courier-Post

He wears No. 6 in honor of his favorite player — Stan Musial.

His team, naturally, is the Cardinals.

Bill Curzie has a passion for baseball. He grew up playing on the streets of Riverside as a young kid, riding his bike to the Riverside AA field in the mid-1940s on warm summer days to play the game he loved.

“I was a sandlot kid,” he recalled. “I’d go back every day. It didn’t matter how hot it was. We just played ball.”

Now 77 and a Delran resident, Curzie’s passion for the game hasn’t lessened. In fact, he remains an active participant and someone others thank for keeping their dreams of playing America’s pastime alive and well.

It was 20 years ago that Curzie founded the South Jersey Men’s Senior Baseball League. There were six teams that inaugural season, a ceremony at the same AA field in Riverside christened the league on June 15, 1992.

“He really laid the foundation, the groundwork, in creating a league for guys to get together and play baseball,” said league president Lou Marshall. “The league has evolved into a pretty serious baseball league and there are quite a few really fine players.

“Bill is a great man and I can’t say enough about the guy. He’s a real pioneer, especially as far as it being a wooden bat league.”

While the league has become more competitive through the years, it was established with an emphasis on participation. It was one of the first leagues to use wooden bats, something it continues with to this day.

“I’ve had guys tell me thanks for giving them the chance to come back and play baseball again. That’s great,” said Curzie, who was recently honored by the league during its All-Star Weekend at Campbell’s Field in Camden. “Maybe someone else might have come along and done it, but I planted the seed and it’s a great feeling to know that.”

The league has grown considerably over the past two decades, boasting over 1,200 players of varying skill levels in four divisions — 18-and-over, 25-over, 35-over and 45-over. A 55-over division is coming soon.

Much like the major leagues, the season begins in April and ends as late as mid-November. There are over 200 players who have been involved since its inception and 400 are over the age of 50.

“There were high school, college and competitive college leagues in the summer, but there wasn’t a true recreational baseball league. He has brought together so many people through the years that have that common bond of baseball. These are people that just love baseball – they still live, breathe and sleep it.”

Curzie took early retirement from his job with the State Department of Education in 1992 and found he wanted to play again. He heard about a league being formed in the area and attended a meeting in Cherry Hill looking to join a team.

Instead, he left that meeting in charge of establishing the league.

And with the cooperation of many over the years, the SJMSBL continues to thrive.

“I’m still learning things today about hitting, fielding,” said Curzie, who has also organized an over-70 team that competes in national events in Florida and Arizona. “As you get older, the body doesn’t want to do what the mind says. But it’s been an interesting experience.

“The more you do it, the more you feel you have to keep doing it. If you can’t play the field any longer, you DH. Batting seems to be the last thing to go.”

Curzie hits the gym five or six days a week to help stay in shape. When he’s not playing baseball, he also enjoys leading the Sierra Club on camping trips. He participates in cross country skiing.

And for the past 12 years, he’s volunteered in preparation for the Iditarod in Alaska.

Said Hourahan: “Guys like me at 50 look up to guys like Bill. I hope to one day be in his position.”

“I’m going to keep doing it,” Curzie said. “If you stop and rest, you’ll get rusty.

“We go inning by inning, play by play. At the end of the game, we look back at certain things but we don’t think about whether we won or lost. This league has helped to keep me and a lot of guys in shape, active and having fun. What more could we ask for?”