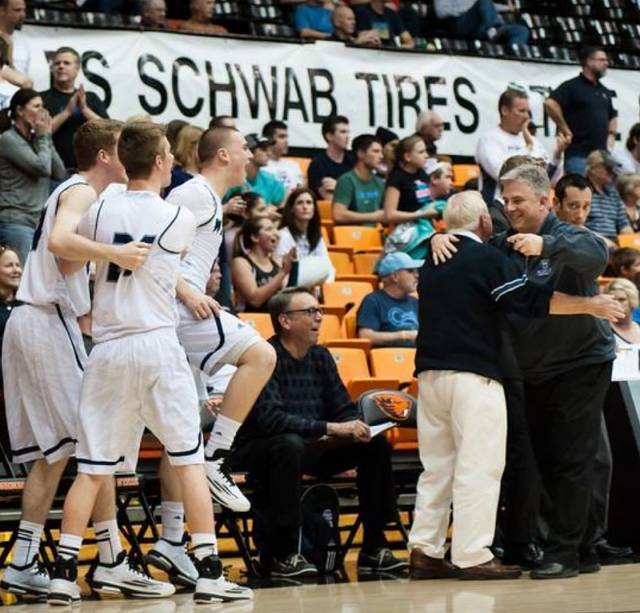 Coach John Roche and Wildcat Head Coach Chris Roche share an embrace during the final moments of the Wildcats 2015 come-from-behind state tournament semi-final win over Marist at Gill Coliseum in Corvallis.
The hundreds, perhaps thousands, of people who show up at McArthur Court to honor John Roche on Sunday will include many of the coaches he beat to reach 300 wins at Churchill.

Preaching a motion offense and man-to-man defense, Roche earned a reputation as one of the top sideline strategists to ever coach high school boys basketball in Oregon. He won five Midwestern League titles during 15 years with the Lancers and took 11 trips to the state tournament, including two that ended with a championship.

“I think there were a lot of guys who loved coaching against him even though he was hard to beat,” his son, Chris Roche, said. “There were a whole bunch of great coaches with great programs who also respected each other and really got along.”

“When the game was over, it was over,” Fryback said. “John was ready to give you a nickname and go play golf or racquetball or anything else. Once he was a friend of yours, you were always a friend.”

Roche died at age 72 on April 11 following a year-long battle with cancer. He will be remembered during a celebration of life at 2 p.m. Sunday.

Roche’s father, Jack, was a football assistant at Oregon under Len Casanova from 1951-70. John Roche, a South Eugene grad, played on the freshman football and basketball teams at Oregon and had seven catches for 93 yards as a 5-foot-7, 170-pound wide receiver with the Ducks in 1967.

“He told stories of trying to block a defensive end from USC and the guy just laughed at him,” Chris Roche recalled.

Roche began his basketball coaching career as an assistant at Marshfield and spent three years working for Barney Holland at North Eugene. His first job as head coach was at Central Catholic, but desiring entry into the public employees system, he left after four years for McKay where he coached five seasons before spending two years as coach at Willamette University.

When Roche realized he didn’t like recruiting in college — “I felt like I was selling life insurance,” he quipped — he returned to his hometown when the job opened up at Churchill.

Roche had an overall record of 28-13 at the state tournament, taking home a trophy from his final nine trips to the Memorial Coliseum in Portland.

Roche reached two state title games, both as an underdog to a powerhouse Portland Interscholastic League program. Churchill defeated Jefferson 54-48 for the 1995 championship followed by a 78-46 win over Benson to claim the title in 2001.

“John was an old-school coach where you played as hard as you could every second you were in the game and that was the only acceptable way to play,” said Tim Euhus, who played for Roche from 1997-99 before going on to spend four seasons as a tight end in the NFL. “We had a lot of fun playing for him that way. Everything was high-discipline and high-effort. You didn’t want to let him down as a player because he believed in you.”

Euhus grew up attending Roche’s summer camps at Churchill and recalled joining teammates to play cribbage in Roche’s classroom during free periods at Churchill. Like many of his former teammates, Euhus became a regular golf partner with Roche after graduation.

“You don’t see that now where players think ‘We’ve got to get this done for ourselves and for our coach’,” said Euhus, a financial adviser for Edward Jones in Corvallis who has coached football at Crescent Valley and Corvallis high schools. “There was such a high standard there.”

Roche built his reputation with an aggressive man-to-man defense.

“They were all over you,” Fryback said. “They would deny the entry pass and the first pass from the point guard. He’d scout you and know what passes you needed to get things going and deny that. Every pass was hard and it was impossible to get in transition offense because they hustled back on defense.”

Euhus recalled a game during his junior year when the Lancers took a 26-8 halftime lead over Springfield.

“We went into the locker room thinking ‘He’s going to have nothing to say to us’ and he came in and said ‘In an ideal defensive game, the other team would not score’,” Euhus recalled with a laugh.

Roche returned to Churchill as coach in 2005, but stepped down following an 18-7 season in order to have a knee replacement. His 415 career wins ranks 15th among coaches in the top classification of Oregon boys basketball.

He spent the final dozen years of his career assisting his son Chris, the head coach at Wilsonville. The Wildcats won state titles in 2016 and 2017 and again last March although John Roche was not able to be on the bench when his grandson, Jack, had seven points and 13 assists in a 67-58 win over Churchill during the title game.

“It was amazing, he’d come into the gym and just change the dynamic because everyone paid attention to him,” Chris Roche said of having his dad as an assistant. “I could turn to my left and there he was. Anything I wanted to know, he had an idea. It was awesome to spend time with him. When I was little, I grew up in the gym going to practice and playing for him so it came full circle.”

Roche was never the best-dressed coach, choosing instead to wear a golf shirt and khakis that made it appear as if he had just returned from a round of golf at Springfield Country Club with friends like Frank Spear, a longtime Churchill football assistant, and Terry Viohl, the former North Eugene basketball coach.

Roche bragged that he never stepped foot in Valley River Center, noting he once went there to buy his wife, Katy, a gift but saw a sidewalk sale and purchased her gift outside of the mall.

“He wasn’t just a coach or a teacher or a friend, he cared about others,” Chris Roche said. “He was special because everything was authentic. What you saw is exactly what you got. If a team needed to be pushed or scolded or challenged, he was right there to do that. What a lot of people don’t realize is that he also hugged and loved his players as hard as any coach I’ve known. All his ‘X’ and ‘O’ stuff was at another level, but his teams were great because of his ability to inspire them and get them to play as a team.”