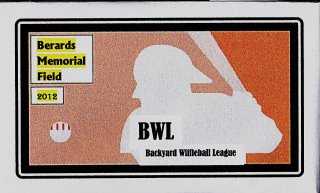 Welcome back to another great year of wiffleball! I hope all are excited for another great tournament! Pool Play will begin on August 11th and continue into August 12th (see schedule below). New to this season is a bigger field and more players per team! 3 fielders and 4 batters are allowed per team. This year there are 4 team participating. Everyone will play each other once. After pool play everyone will be re-seeded into a double elimination bracket. Once the last two teams are determined, they will face off in a best-of-3 series to crown this years Champion!

1. Batters are only allowed to use the Yellow regulation size Wiffleball bats.

2. Balls used are regulation Wiffleballs with knife cuts through them.

3. Pool Play: Each player will play 1 game against every opponent.

5. Re-Seeding
a. First, teams will be seeded by Wins/win percentage
b. If at any point there is a tie in the seedings, teams will be seeded by:
1. Runs For (RF)
2. Runs Allowed (RA)
3. Home runs Hit (HR)
4. Strikeouts For (SO)
c. After pool play the top 4 teams in the standings will be put into a double elimination bracket. Last team standing will become the champion!
d. Home field will be determined by your seed. Highest seed gets home field advantage.

e. Mercy rule will be in effect during playoffs.

Batting:
a. Batting orders include no less than 3 players and no more than 4 players.

b. Foul lines will be painted onto the field to determine the boundaries of the field.
c. Home runs are if the ball is fair once it crosses the fence.
d. If the ball rolls under the fence it is a ground rule double.

e. If the ball is thrown out of play the runner is awarded one base.

behind the back stop

hitting any part of the house including the porch
f. Batters are allowed to bunt, but the ball must go past the bunting line which will be painted on the field. If it doesn't go past the line it is a foul ball. If the batter bunts with 2 strikes and it goes foul the batter is out.

Pitching:
a. 4 balls, 3 strikes. Hit batsmen is a ball. If the pitcher hits the strike zone it is a strike. If the batter fouls the 3rd strike into the middle of the strike zone (not the plastic rectangle) it is a strike out assuming the catcher caught it.
b. A reasonable speed is allowed. Umps decision. First time will be a warning unless it is a ridiculous speed. If the pitch is told to be too fast it is called a ball. If it is warning it is called whatever it was pitched.
c. Pitchers are not allowed to pitch in front of the pitcher’s mound, but they may pitch behind the rubber within a reasonable distance.

d. Pitchers may not pitch back to back games unless the first game they pitched 3 innings or less.

Ex. Two pitchers can pitch 3 innings each in a game and both can pitch for the teams next game.

Fielding:
a. 3 fielders in the field at a time.