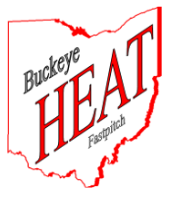 Welcome to the home of the 2014 18U Buckeye Heat - Patton and the second year Buckeye Heat 99 - Yeater.  This website was started back in 2007 as the team site for the 14U GFOD Thunder based out of Bellville Ohio.  That team was coached by Shayne Yeater and Greg Hykes and started with team members Tiffani Wallrabenstein, Taylor Yeater, Michelle Heacock, Sherri Pullem, Erika Chuburko, Amanda Toy, Stephanie Cunningham, Korri Wyatt, Jordan Hykes, Haleigh Staci, and Kylee Myers.
In 2008 GFOD disbanded as an organization and the team was absorbed by the Mid Ohio Bullets baseball club who was looking to add softball teams to their organization.  The next two years (2008 and 2009) saw the team, still coached by Yeater and Hykes as the Bullets.  Over those two years several players moved on to other teams and the Bullets picked up several players and subs, which included, Ashton Bogo, Cathlene Beck, Taylor Thomas, Kathleen Reid, and Jessica Montgomery.
In 2010 with the team moving up to 18U it was time to move the team on to a bigger stage for recruiting purposes, thus the team became the 18U Buckeye Heat - Yeater.  That team still had Taylor, Jordan, Michelle, Amanda, Stephanie, and Kylee from the original 2007 GFOD Thunder team, and added  assistant coach Paul Patton, Jessica Clutter, Caitlin Prange, Taylor Goddard, Megan Patton, Kayla Woodard, and Alex Radjen.
In 2011 long time coach Shayne Yeater stepped down and long time assistant Greg Hykes took over the team, with the help of Paul Patton.  2011 was the coming of an end for a great group of young ladies.  That same core from 2007 of Taylor, Jordan, Michelle, Amanda, Kylee, played out their final travel ball days alongside previous years Megan Patton along with newcomers Leigh Seidlak, Krista Tolliver, Brooke Staton, Tori Speakman, Ciara Howell, and Emma Harrington.
2012 saw coach Hykes step down and turn head coaching responsibilities over to Paul Patton.  Only one player returned from the 2011 team, Krista Tolliver, as many had aged out and were moving on to their college softball careers...the 2012 team added eleven new faces.  So here we are...the team of 2013, with coach Paul Patton at the helm, has been assembled and is busy preparing for the upcoming summer season.  I hope this gives you a better understanding of where this website originated from and continued success to the players and coaches who carry on the tradition!!!
GO HEAT!!!