The Eastern New York Youth Soccer Association (ENYYSA) is very pleased to introduce the ENY Xpressway League (ENYXL), which will kick off this fall. The new league will start small with small-sided games in the Under-10 to Under-12 age groups for both boys and girls travel teams.The five Eastern New York leagues with clubs in New York City––Big Apple Youth Soccer League, Cosmopolitan Junior Soccer League, Long Island Junior Soccer League, Metrokids Interregional Soccer League and Staten Island Youth Soccer League––will be contributing teams.“Our five Downstate leagues asked to start a league where their teams can diversify the competition they play but not have to travel a great distance to go to away games,” commented Eastern New York President Richard Christiano. “The ENY Xpressway League accomplishes this when it kicks off this fall on fields in New York City and on Long Island.”ENYXL derives its name from the 17 local expressways that connect our soccer clubs and fields so chances are that families will be driving on an expressway in traveling to away games in New York City and Long Island. From the most well-known expressways such as the Brooklyn-Queens Expressway, Cross Bronx Expressway, Long Island Expressway and Staten Island Expressway, to those that are not as well-known like the Bruckner, Clearview, Dr. Martin Luther King Jr., Gowanus, JFK, Lincoln Tunnel, Major Deegan, Nassau, Sheridan, Throgs Neck, Van Wyck, West Shore and Whitestone. The first “e” of expressway was dropped in the new league’s name to create the unusual acronym of ENYXL.For more information about ENYXL, please contact Eastern New York’s Diana Knight at diana@enysoccer.com or 516-766-0849.

October 1, 2014-The Eastern New York Youth Soccer Association (ENYYSA) is happy to announce that Big Apple Youth Soccer League (BAYSL) President Luis Montoya has been named Trustee of our organization. The Astoria, Queens resident will serve ENYYSA President Richard Christiano in this role just as he once served Christiano’s predecessor, Barry Salter, in the same role as Trustee.

“We are very pleased to welcome back Luis to our Board of Directors,” commented ENYYSA President Christiano. “I’m certain that he will provide our Board with innovative ideas and continue to make certain that all children in Eastern New York are well-represented by our organization.”

Montoya is a native of Peru who emigrated to the United States in 1970. He is the only President that the BAYSL has ever known, serving in this capacity since the league’s founding in 1997. 1,000 Latino boys and girls from New York City are currently registered in the BAYSL and Montoya has spent most of his life making certain that all the children of Eastern New York have the same opportunity to play the world’s most popular sport. He has served as a member of the Diversity Committee for US Soccer under three Presidents––Alan Rothenberg, Dr. Bob Contiguglia and currently under Sunil Gulati.

Montoya has also volunteered as Games Chairperson for the Hellenic-American Soccer League and was on the Board of Directors for that league for seven years as well as serving as Trustee for a few years in the Eastern New York State Adult Soccer Association. Additionally, for nearly two decades, he promoted and coordinated C, D, E and F coaching courses in New York City with Alfonso Mondelo, Arnold Ramirez, John Ramirez, Howard Rubenstein and Nick Zlatar.

When he is not found volunteering on the soccer field, Luis works as a tele-communications technician with Verizon. 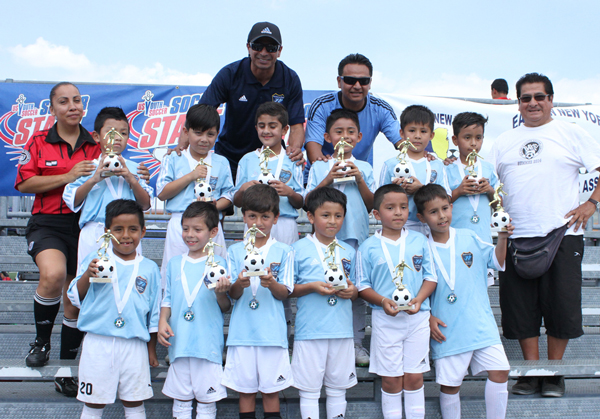 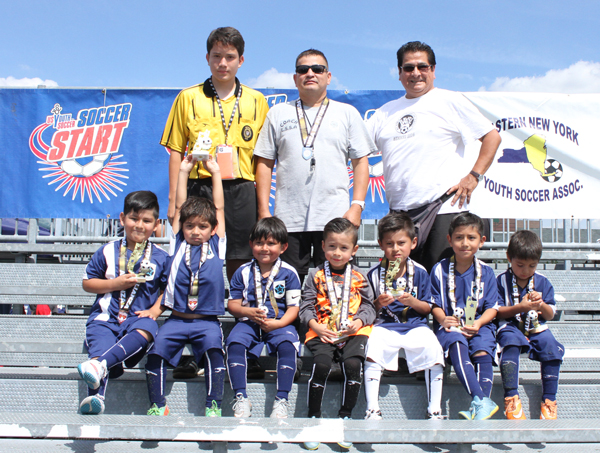 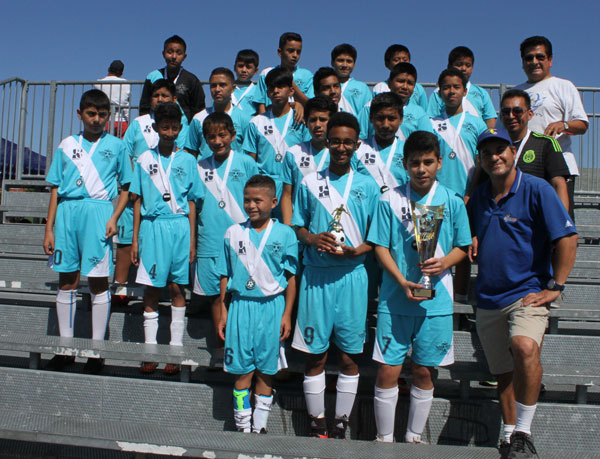 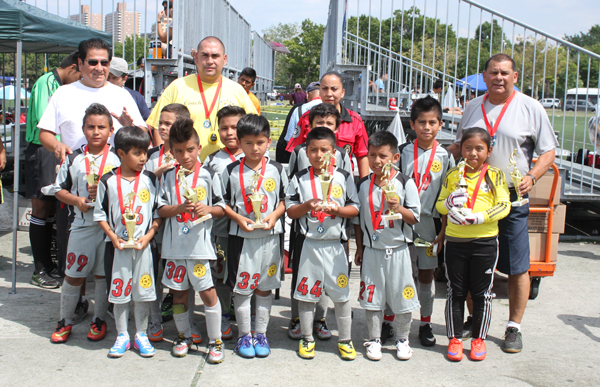 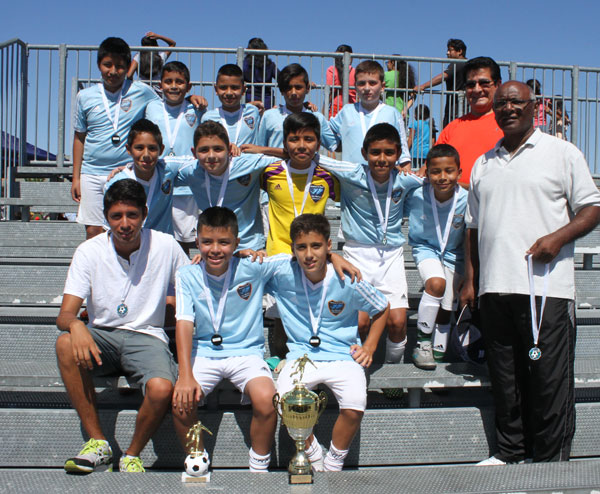 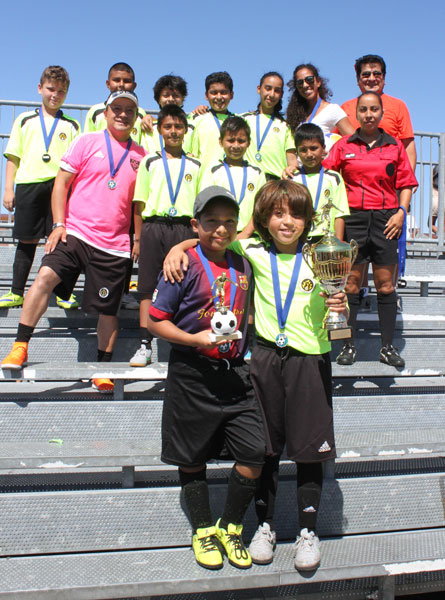 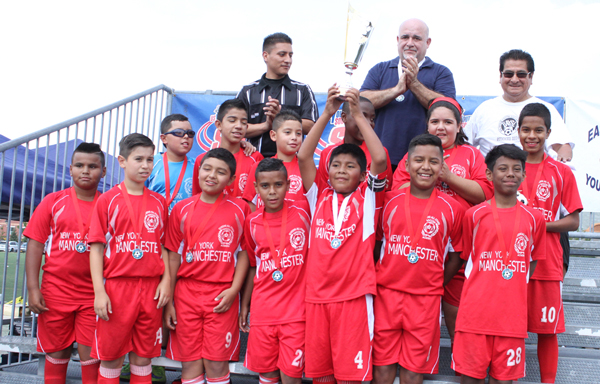 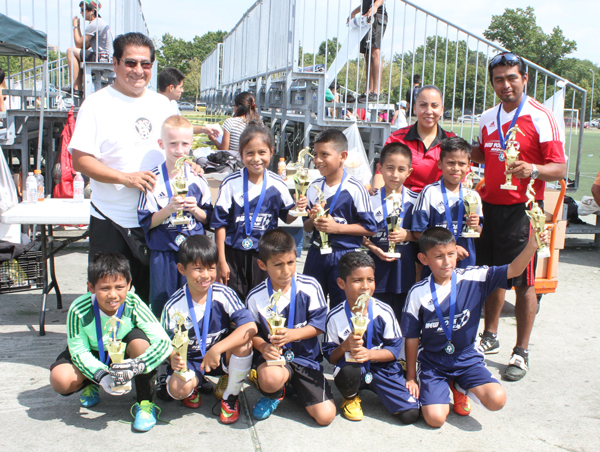 PHOTOS OF THE WEEK Photos by Pedro Mena 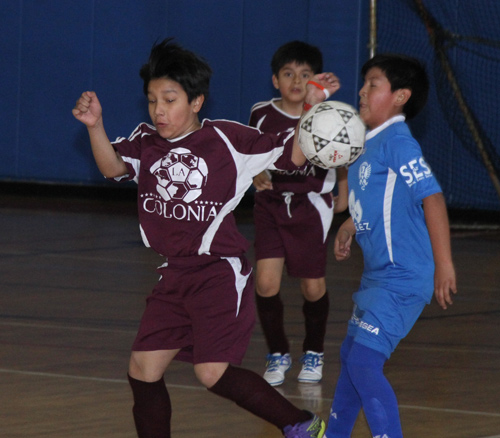 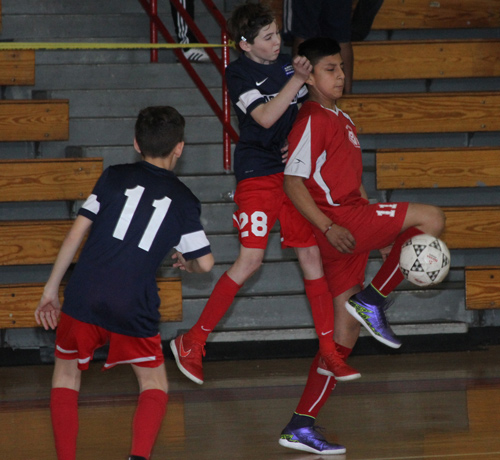 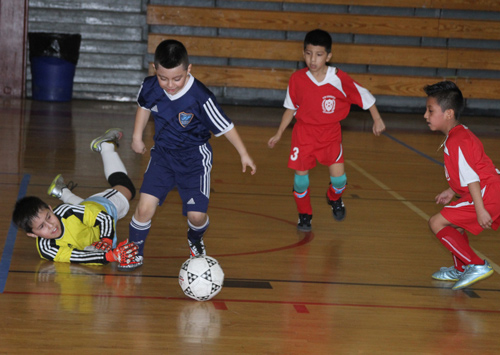 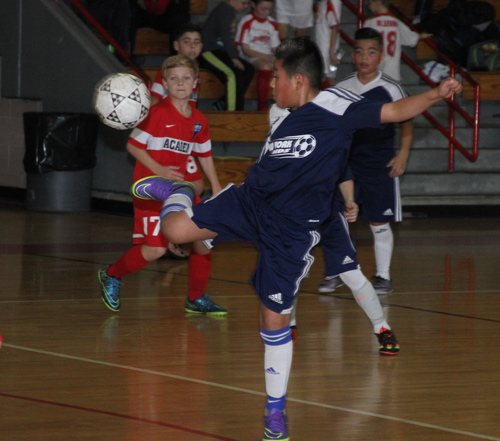 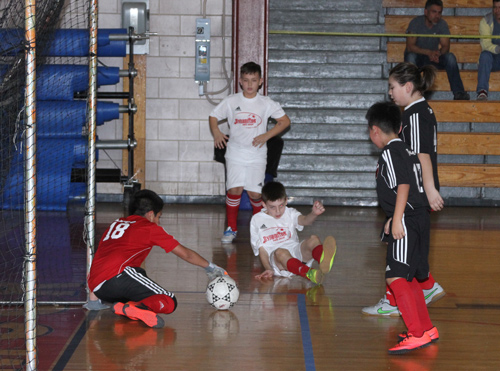 September 13, 2016–Fifteen years after the September 11 attacks, New Yorkers still remember like it was yesterday. Engine 307 firefighter and soccer player Alex Carranza decided to start a tournament in tribute to one of New York’s fallen firefighters. In June 2014, Lieutenant Steve Reisman passed away from brain cancer connected to working at the World Trade Center after the September 11 terror attacks.

After the success of the first tournament held two years ago, Carranza was encouraged by his colleagues to host another one. This year, Carranza welcomed Big Apple Youth Soccer League (BAYSL) President and Eastern New York Youth Soccer Association (ENYYSA) Trustee Luis Montoya to help organize the event. The tournament took place on Thursday, September 8 in Flushing Meadows Corona Park, the home of many BAYSL games. 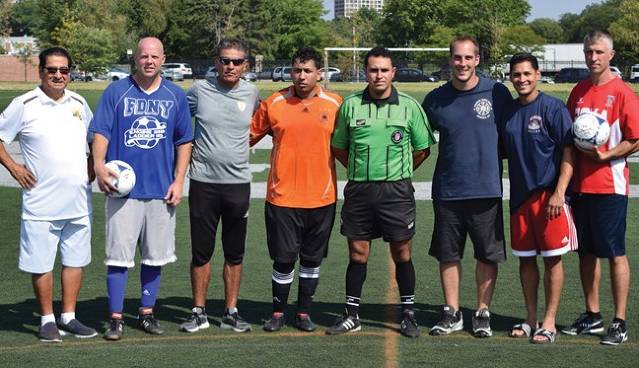 Luis Montoya to the far left in white and Alex Carranza pictured second to the right, wearing red shorts.

Teams were formed by firehouses from different areas in New York City’s borough of Queens. Teams played two 30-minute games during the tournament where winners eventually moved on to semifinals and finals. This year’s finalists were The Patriots of Engine 320 in Flushing and Hunters Point of Engine 258 in Long Island City. The Patriots came out on top as the 2016 champions.

Softball, baseball, and football are common games amongst “New York City’s bravest,” but Carranza wanted to introduce a new sporting event to FDNY.

“I wanted to motivate the guys with a different sport, so I decided to mix things up with soccer,” Carranza explained.

His ultimate goal for this tournament is for it to grow into a large fundraiser in honor of his colleague,

Lieutenant Steven Reisman. Carranza would like the fundraiser proceeds to go towards cancer research or another cause of the Reisman family’s choice. 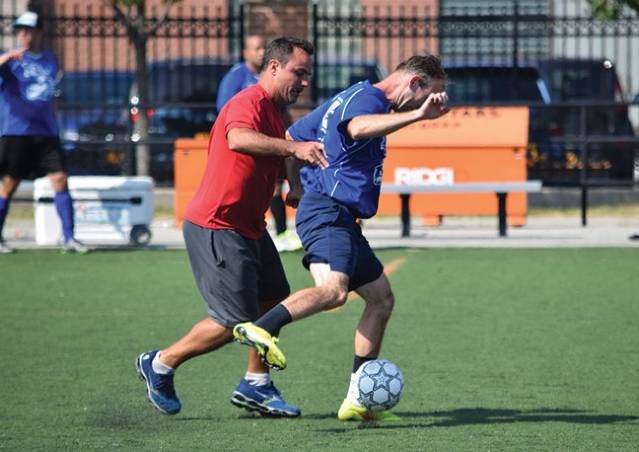 The Patriots and Hunters Point play in the final game for the 2016 championship. December 13, 2016-The Eastern New York Youth Soccer Association (ENYYSA) is pleased to announce that Luis Montoya has been inducted into the Eastern New York Soccer Hall of Fame. The induction ceremony took place at our Holiday Party on December 4 at Marina del Rey in the Bronx. 2016 must be Luis' year as he was also selected as Eastern New York’s Personality of the Month In June.

He founded the Big Apple Youth Soccer League (BAYSL) in 1997 to serve the growing Latino community in New York City and is the only President that the BAYSL has known in its 20 years of existence. 62 boys teams and seven girls squads from Queens, Brooklyn and the Bronx currently play in the league.

Luis has spent much of his life making certain that all children in the United States have the opportunity to play the world’s most popular sport. He has served as a member of the Diversity Committee for US Soccer under three Presidents––Alan Rothenberg, Dr. Bob Contiguglia and currently under Sunil Gulati. He is a native of Lima, Peru who immigrated to the United States in 1970.

With Eastern New York, Luis chairs the Soccer Start/Inner City Committee and also volunteers as a member on the Appeals, Tournament Control and Publicity Committees.

Luis has also volunteered as Games Chairperson for the Hellenic-American Soccer League and was on the Board of Directors for that league for seven years as well as serving as Trustee for a few years in the Eastern New York State Adult Soccer Association. Working under the various State Directors of Coaching Education, he has organized numerous “C,” “D,” “E”  and “F” courses, mostly in Spanish, reaching an important demographic of coaches who otherwise would not have received the benefit of Eastern New York's support.

Luis has five adult children. His sons Oschta and Paschco were given Peruvian Indian names and live in Florida. Paschco plays soccer in the Sunshine State. Luis’ daughter Monica also lives there, while his other daughters Carrine and Katie live on Long Island. Carrine’s children, Michael and Madison, play for Oceanside United of the Long Island Junior Soccer League (LIJSL).

With over 100,000 youth soccer players––both boys and girls––and more than 25,000 volunteers, the non-profit Eastern New York Youth Soccer Association (ENYYSA) stretches from Montauk Point, Long Island to the Canadian border. Members are affiliated with 11 leagues throughout the association, which covers the entire state of New York east of Route 81. ENYYSA exists to promote and enhance the game of soccer for children and teenagersbetween the ages of 5 and 19 years old, and to encourage the healthy development of youth players, coaches, referees and administrators. All levels of soccer are offered––from intramural, travel team and premier players as well as Children With Special Needs. No child who wants to play soccer is turnedaway. ENYYSA is a proud member of the United States Soccer Federation and United States Youth Soccer Association. For more information, please log onto http://www.enysoccer.com/, which receives nearly 300,000 hits annually from the growing soccer community. 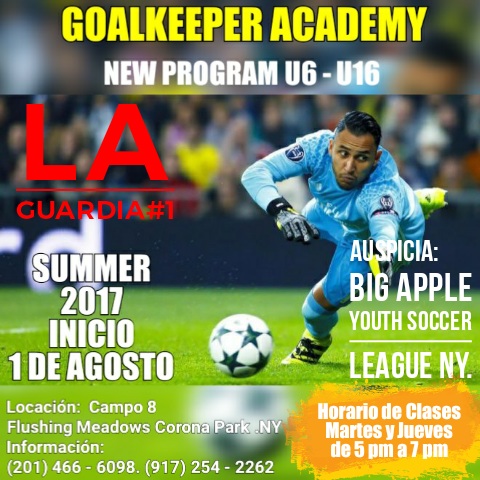 900 kids, mainly Latino, are registered in the Big Apple Youth Soccer League (BAYSL), and these kids come from the New York City boroughs of the Bronx, Brooklyn, Manhattan and Queens, which is considered the most international borough as the people who live there were born in nearly every country in the world.

Additionally, the immigrant population in Queens is nearly 50% with those who are Latino making up more than one in four residents. So it’s very appropriate that the BAYSL held its finals on November 18 in Queens, at Flushing-Meadows Park.

“The kids came, they were happy and they were very well-behaved during our six final games,” commented BAYSL Founder and President Luis Montoya, also the Third Vice President of the Eastern New York Youth Soccer Association (ENYYSA). “All of them received trophies and medals and the older age groups received a soccer ball too.”

Additionally, Latin Star won the Boys-Under-16 championship outright and did not have to play in a final.

Things are looking up for the BAYSL as 300 to 400 new players are expected to register in the league in 2018, according to President Montoya.