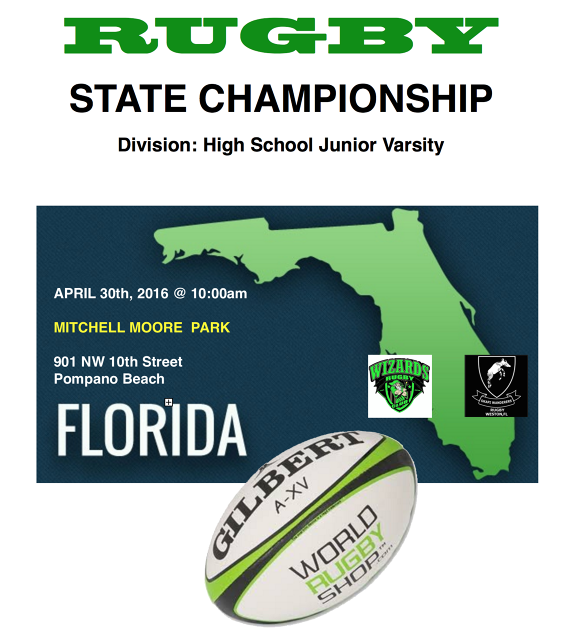 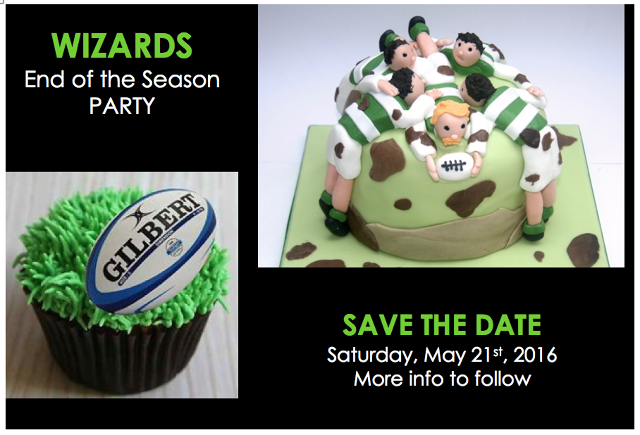 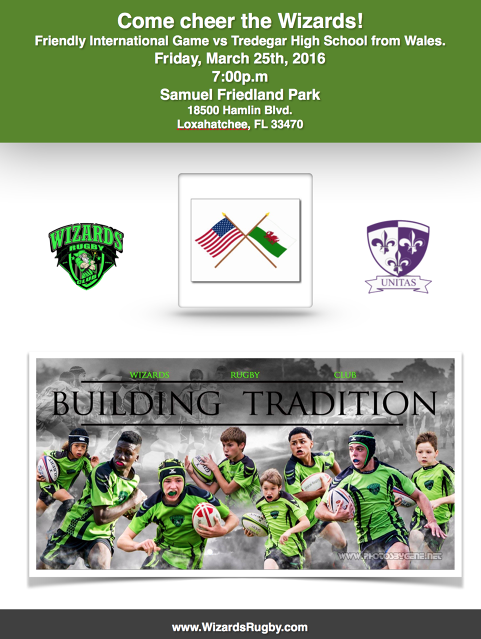 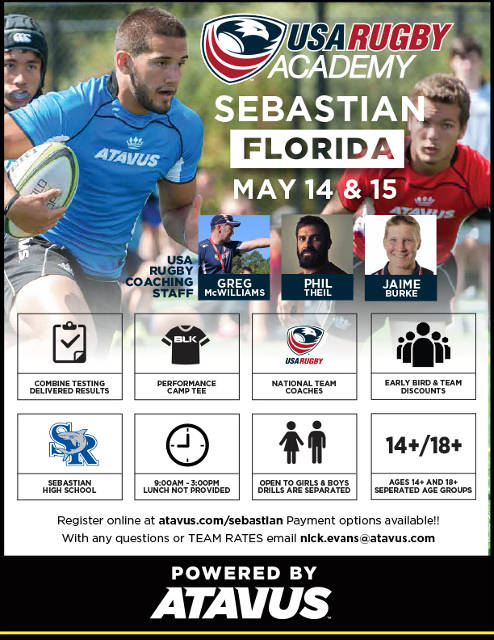 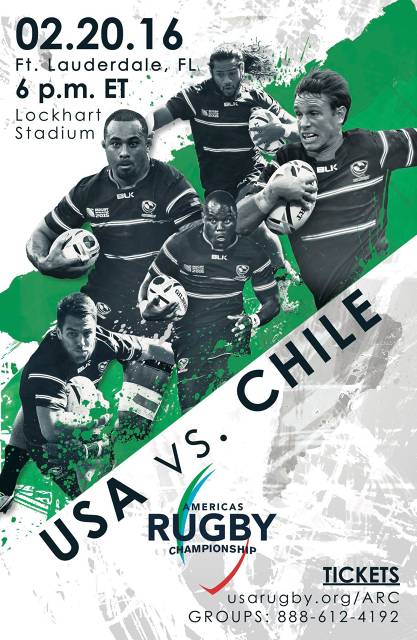 The U10.U12 and JJ divisions of Wizards Rugby Club vs Okapi Wanderers

We will be playing an exhibition flamingo rugby match at half time of the USA vs Chile match.

Let's show up and cheer up our young players!!!

Find below a simple explanation of the new Laws:

ReplacementsAdded to the list of reasons a player who was subbed off may rejoin a match is “a player who has been injured as a result of foul play (as verified by the Match Officials).”

Additional Persons on the FieldOnly non-players allowed on the field while play is going on must be medically trained, or permitted by the referee.

AdvantageWhen a scrum collapses and the referee sees there is no risk to injury, the referee can allow play to continue under the advantage law.

The referee cannot play advantage if the front row is lifted.

Conversion Kicks7s players must take a conversion within 30 seconds of a try being scored (it used to be 40 seconds).

Unfair Play (The Dive Law)Basically this says that if you fake being the victim of foul play, such as pretending you were punched, you will be penalized.

Forming the ScrumPlayers need to form the scrum within 30 seconds.

Wheeling the ScrumThere is no turnover when a scrum is wheeled. This was already the law in U19 and youth rugby, but is now the standard. If a scrum does not wheel but the ball doesn’t come out and the scrum tops moving, there can be a turnover.

Scrumhalf Offside at the ScrumThe scrumhalf who doesn’t put the ball in can’t step into the pocket between the flanker and the No. 8 anymore.The non-put-in scrumhalf also has to stay behind the ball wherever it is in the scrum.

Ending a ScrumThe referee can urge a team to “use it” after they have the scrum won.

Mark for a Free Kick of PenaltyA player can take the kick from anywhere directly behind the referee’s mark, and at least five meters from the goal line.

Welcome to your Rugby Club

You are becoming part of more than a game; Rugby is an experience.

Rugby is mentally demanding and a competitive contact sport.

It is a sport where you have no enemies, only competitors. After the match, Rugby players join with the opposing side for fun and fellowship.

We honor the opposing team because without them we have no game.

It is the trust form of sportsmanship played in more than 110 countries and is the second most popular sport played in the world.

After international Rugby matches there are no riots like the number one sport in the world is known for.

The Rugby tradition of sportsmanship and fellowship has not fostered this behavior.

We as members of the World Rugby family will make this our number one goal.

Mission:  Our mission is to introduce boys and girls to the game of rugby, teach the basic concepts, play attractive rugby and be competitive in the various leagues while making all aspects of the game enjoyable.

Guiding principles:  (How we will conduct ourselves).

Rugby's traditions of camaraderie, associating with the opposition after games, fair play and sportsmanship is one of the differentiators that have attracted people to the game.  While many players will take up rugby for different reasons, rugby's emphasis on tradition and teamwork creates a need for all players and coaches to have the same vision in how we play the game and conduct ourselves on and off the field.  Remember that our conduct and behavior can positively or negatively affect the reputation of rugby in the community.  This affects the opportunity of others to continue to participate in rugby and receive support from the community, schools and sports authorities.  The game is above our own individual attitudes, values and motivation for playing it.  Therefore we avoid any behavior or conduct that reflects negatively on rugby and brings the games and those associated with it into disrepute.

Don't talk back to the ref.

Referees call the game as they see it and will sometimes make bad or marginal calls. However, we do not debate the merits or otherwise of a referee's call.  He cannot and will not change a call - the team captain only is allowed to ask for clarifications.

Minimize talk and discussions to necessary communications only.

Be responsible, do your job and never give up.

We turn up on time to practice and games.

We let the coach know when we are not available.

Every player wears the full clean uniform and mouthguard at every game.

The Team captain makes all tactical decisions on the field.

There is no dissension or arguing amongst the team members during a game.

No taunting or other unacceptable behavior.

We do not trash talk, taunt or in any other way show un-sportsmanlike conduct towards opposing players, coaches and supporters.

Dirty or dangerous play is not part of the game and is not to be tolerated by our team nor retaliated against if perpetrated by the opposition.

We thank referees and other officials.

We are good hosts when we play home games.

We do not whine during or after the game.

Whatever the outcome, we will not act victimized.

All good plays are appreciated by all the team members; self-congratulating, preening etc. has no place in rugby.

We are respectful of our hosts, their property and reputation when we are the visitors.

We strive to improve the image of rugby and rugby players at every opportunity.

Measuring success and progress in how we play:

There are many ways to be winners in a rugby match as well as scoring the most points.  Here are some of the ways in which we will set our goals and measure our playing success:

This is a simple outline for parents to ensure everyone is given the opportunity to enjoy the game to the maximum level. Rugby has always been a game that prides itself on fair play and enjoyment for all, so please adhere to these guidelines to ensure this continues. 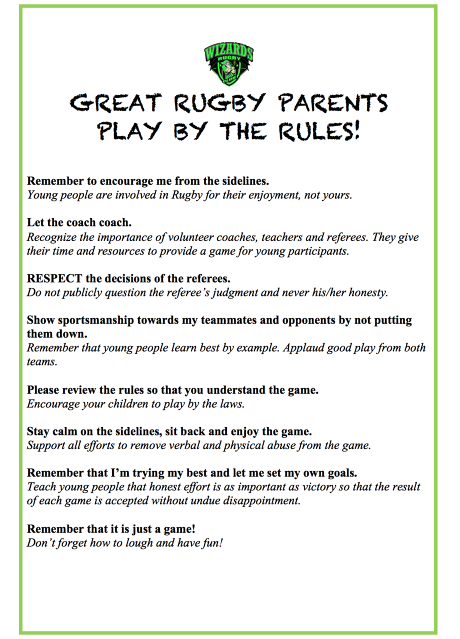 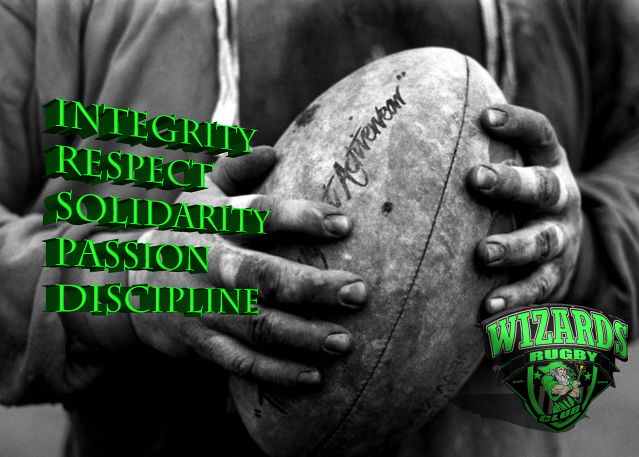 Hello Wizards! I hope you're having a great summer and ready to play a little rugby!!

The after party will be at Castaways Bar and Grill like the Wales match. In preparation for the match we will have practice this Sunday June 28th and Tuesday, June 30th. Sunday June 28th Practice: 4-6pmLoxahatchee Groves Park (on Southern just west of Palms West Hospital) 13901 Southern BlvdTuesday June 30 Practice: 6-8pmAcreage Community ParkThank you

Congratulations to all the boys on a great season! Thank you for your hard work and dedication! 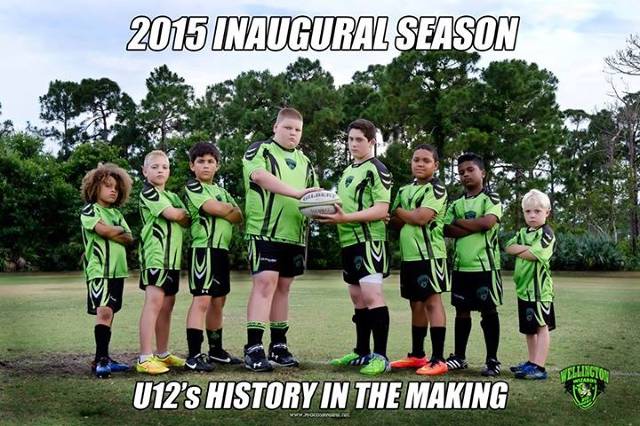 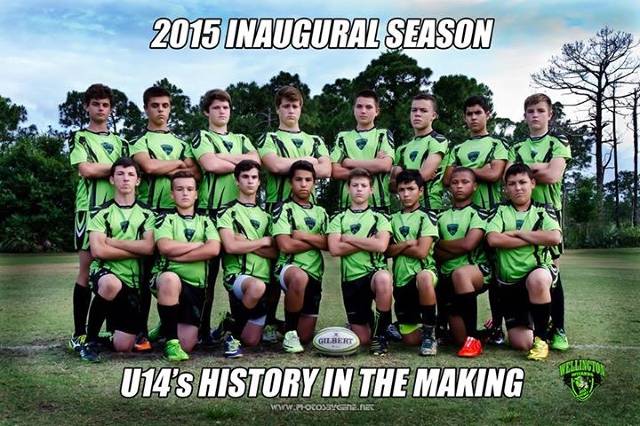 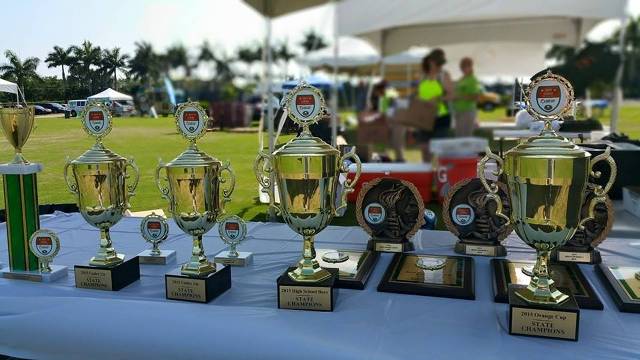 U12 Wizards Video by Jacqueline Copley

﻿﻿Acreage Athletic League Board -
On behalf of the Wizards Rugby Board, I want to extend a very special "Thank You"!.
We cannot express in words how huge it was to our little club this past weekend, especially Monday Night!
You made the Wizards Rugby relevant to the area of Palm Beach and the Florida Youth Rugby Union.  Your partnership, support and caring of youth sports really yells volumes of the type of organization you are and what every youth organization should aspire to be.  The boys and families cannot stop talking about Monday Night!  Many of us have been involved in sports for 25 years and Monday Night was the highlight of our career in Youth sports.  It was an event that every young man will remember for the rest of their lives.
The venue was incredible and we owe AAL soccer for letting us have the wrong field and the AAL borrow their Pylons.  It has been such a struggle to find folks that care in our community in Wellington.   The only reason this club got a chance was because of a sandwich. (Long story....we would love to tell you and plan on it at a later date!)
We are very humbled by your graciousness and giving which means the AAL is part of our small family.   You do not have choice, we have adopted you!!  LOL
If you ever need anything from us, the Wizards will be there for organization in whatever we can do to support.
We started this club because rugby is a different sport.  It is different because the people of the rugby world believe it to be a "way of life".  A "way of life"  that involves supporting one another when the odds are stacked against them and care for one another as if you are family.  That is the foundation that this club was founded on and special lesson that all young people should learn.  Nice to know your team has the same value.  It is a rare thing for a organization to show that they truly care and understand the big picture of life for young adults by extending a helping hand for a club not directly in their community.......but I bet you all know you are rare and special, and that makes you who you are......and what the Wizards aspire to be one day.
Sincerely,
Wizards Youth Rugby Club Board

A poem by Butch Dias 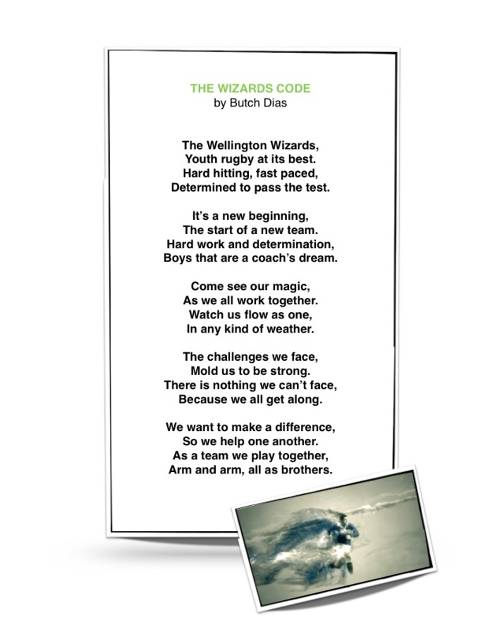 .....After Game Pictures from both of the Teams.

The Wizards wants to thank the players, coaches and staff from Penyrheol for making Palm Beach a stop on their tour. It was a pleasure to meet you all and I know our boys enjoyed hosting you as much as our coaches, staff and parents. Watching the boys play a pick up game of soccer and sitting in the stands socializing after the Rugby game as if they were old friends reinforced for all present what this game is all about.

Despite the Welsh boys obvious superiority inexperience and technique, the Wizards managed their first win in international play and we could not be prouder!

We also want to thank the players and parents from the other clubs who made the trip up to provide our guests some competition. Thanks again for helping . We could not have done it without you!

The Wellington Wizards have had their first Board Members elected for the 2015 Rugby Season on February 11th, 2015.  The new leadership team is as follows: 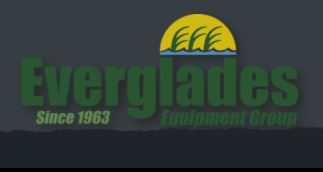 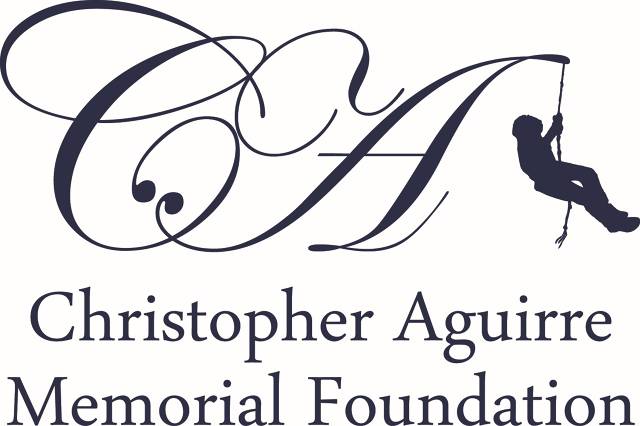 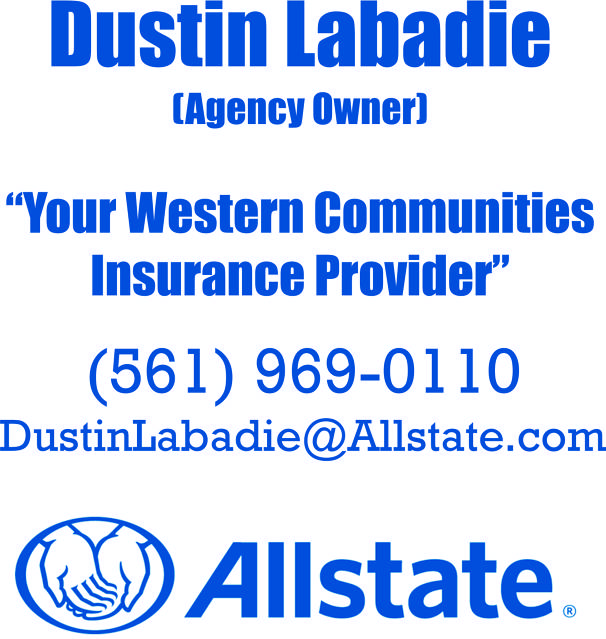