It is with a very heavy heart that Jackson Soccer mourns the loss of one of it's own, our Hero Warrior, Nolan Weber. Nolan's strength, character, and infectious smile taught us all how to Believe. Nolan, Jackson Soccer will never, ever forget you. You have touched us all, and have greatly enriched our lives for having had the opportunity to call you our friend and teammate. 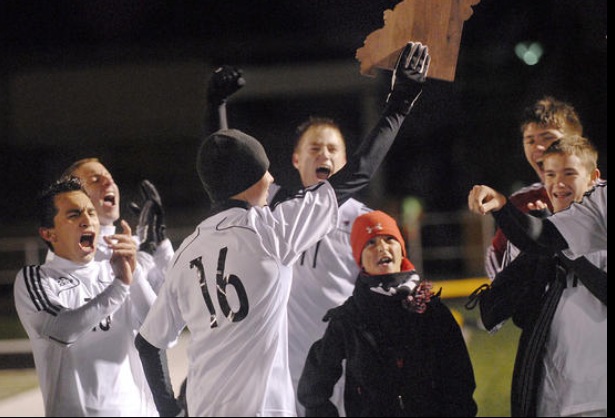 The Jackson Varsity/JV soccer season opened up to a packed house Friday night! In this matchup versus Saxony Lutheran, the varsity boys came away with a 7-0 victory. A very strong defensive effort, plus goals by Josh Scholl (2), Liam Gray (2), Justice Crosnoe (2), and Aaron Voshage (1) helped to seal the deal for the Indians. The JV also had a tremendous night, with a 6-0 victory over the Saxony JV squad. Thanks to everyone who came out and supported the Jackson soccer program this opening night! 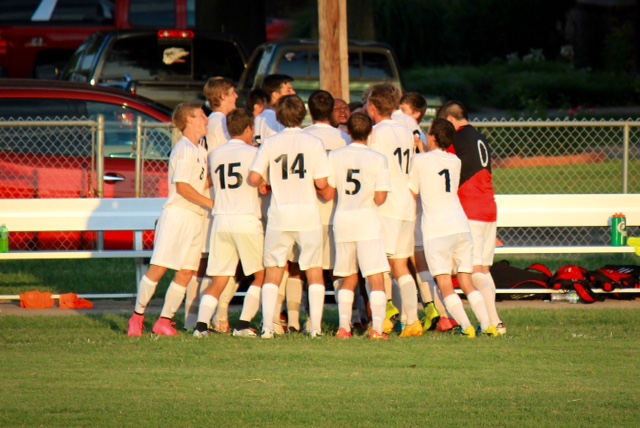 The Jackson Indians kicked off the annual Notre Dame SoccerFest Tournament with a decisive win over conference rival Poplar Bluff. Now onto the semifinals versus Perryville! 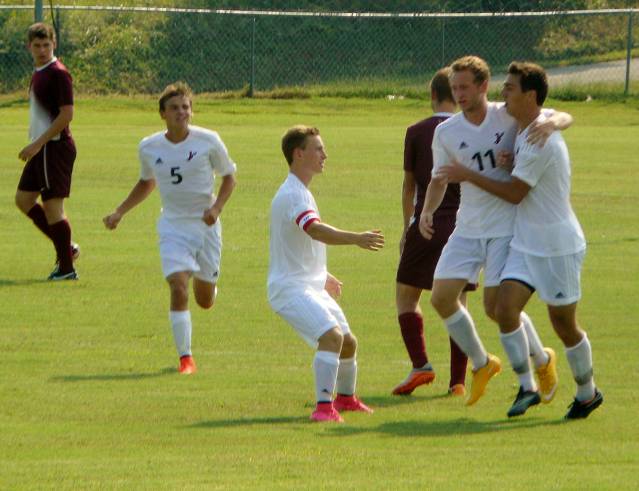 A Home Win Versus Carbondale

The Varsity defeated Carbondale by the score of 4-2. The Indians scoring was led by Aaron Voshage with 3 goals, Justice Crosnoe with a goal and an assist, and Liam Gray with 3 assists. The Junior Varsity won by a score of 3-0, with Kaleb Irby recording all 3 goals.

The Indians Take 3rd Place In The Notre Dame Soccerfest

After the win over Poplar Bluff, the Indians took a tough 3-1 loss to (eventual tournament champion) Perryville in the semifinals. The boys rebounded for a strong finish, with a 5-1 win over Cape Central in the 3rd place game. 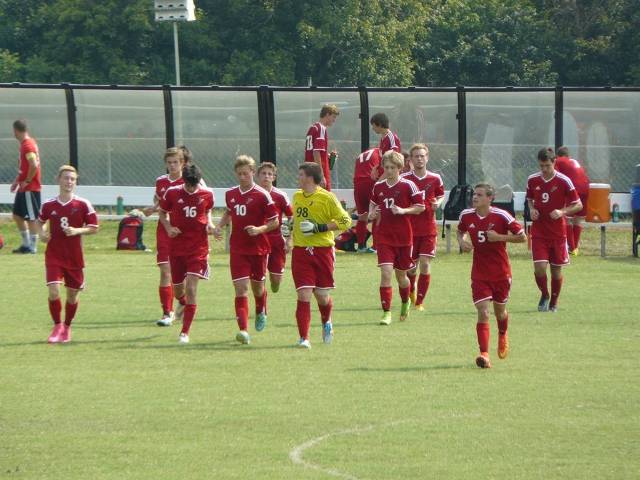 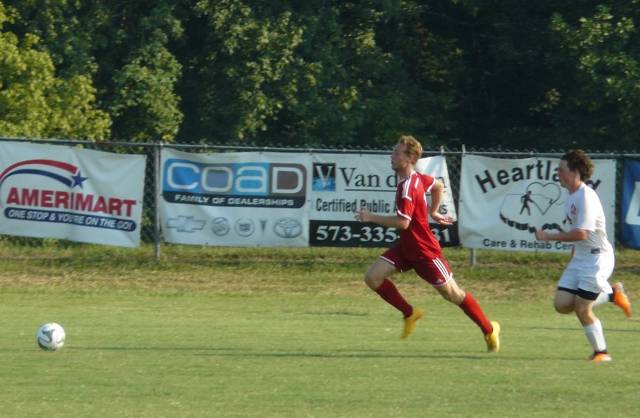 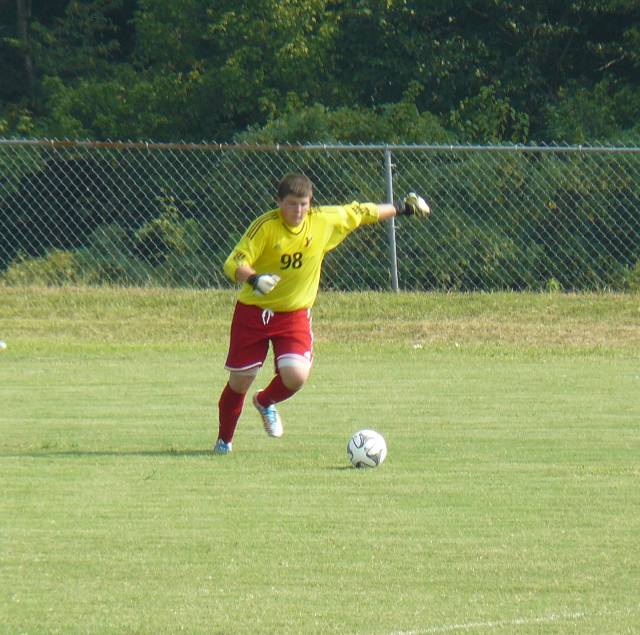 The Indians Were Looking Forward To A Thriller In Farmington

The Varsity Indians won an extremely hard fought, intense, and thrilling game on the road in Farmington. In a game that included 10 shots on goal by each team, Jackson prevailed in the PK shootout. With penalty kicks being converted by Colten Weber, Josh Scholl, Liam Gray, and Hunter Kelpe; the Indians won the shootout 4-2, thus earning the 1-0 victory. With a tremendous effort throughout the game (and especially the shootout), goalkeeper Brayden Emmons was certainly the man of the match! In a very solidly played game, the Junior Varsity was victorious by a score of 2-0.
Link To Farmington News Article. 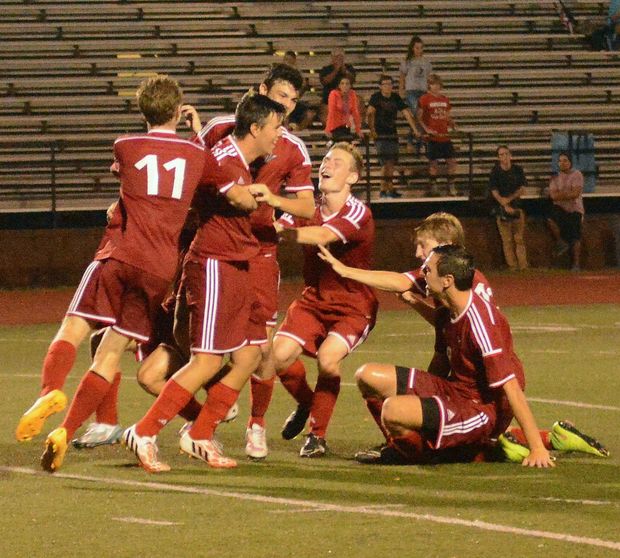 The Indians Take Down Fox

Goalkeeper Brayden Emmons and the Indians defense led the way, posting their 3rd shutout of the season. Josh Scholl and Liam Gray each contributed two goals apiece, and Justice Crosnoe added another. The team showed solid play from the back line, through the midfield, and on into the front line. The Junior Varsity won their matchup by a final of 3-1, with goals by Tanner Walton, Kaleb Irby, and Colten Seyer. 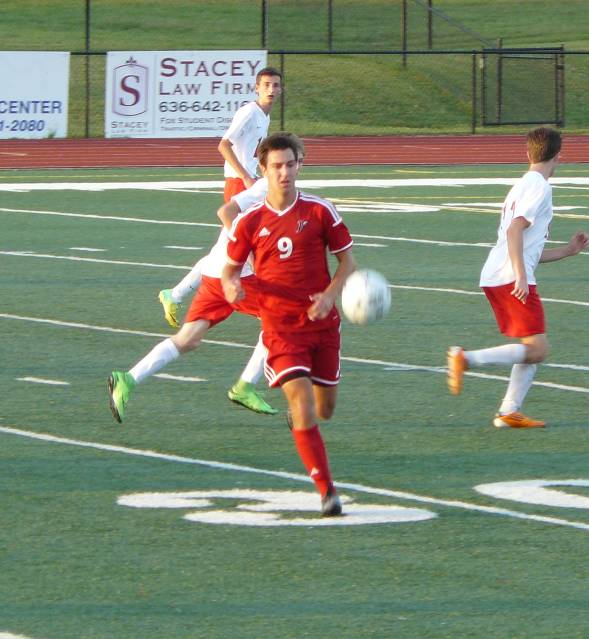 Despite holding a 1-0 lead through the majority of the match, the varsity boys allowed Seckman to equalize deep into the second half and take the game into extra time. Both sides had opportunities to close it out; however, it was the home team that netted the deciding goal. The Junior Varsity boys were able score early, and maintain their 2-0 lead until the final whistle. The JV boys overall record is now 7 wins and 1 loss. 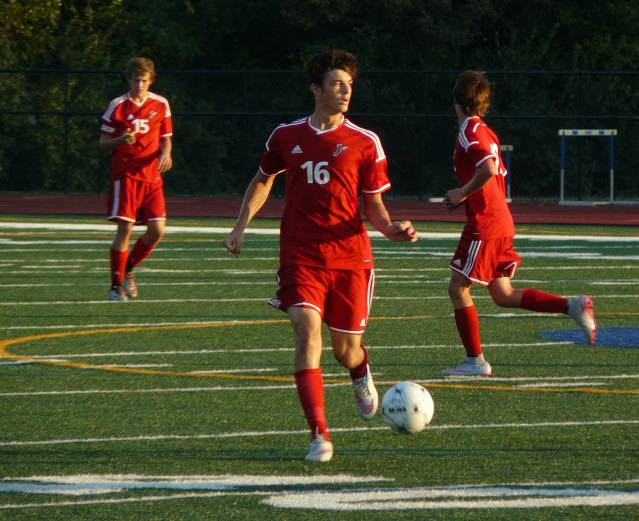 Jackson's opening match of the tournament was against Parkway West on Friday evening. The game was played to a 1-1 draw, despite a very solid effort by the entire team. Next, the Indians played a physical match versus Parkway North, that once again ended with a 1-1 result. In the third and final game of the tournament, Jackson finally recorded a win in defeating Parkway South by a score of 5-3. The entire tournament included some very physical play, that should serve to prepare the boys as they head into the second half of the season. 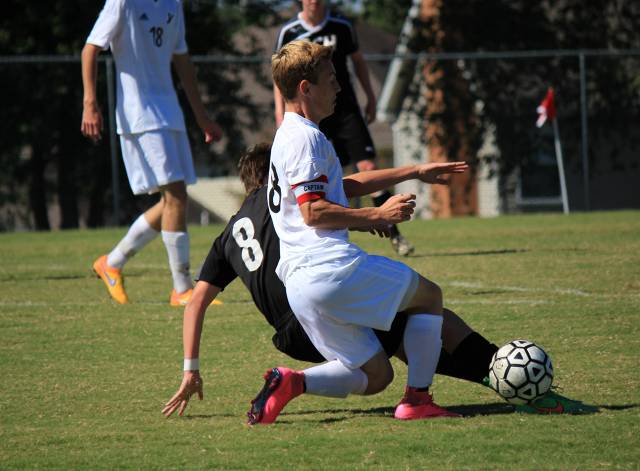 The Varsity boys dominated touches, shots and time of possession in the first half; however, the match remained 0-0 at the mid mark. In the second half, the Indians finally broke free with two laser shot goals from Josh Scholl (1) and Hunter Crowden (1). The Varsity Indians are now 3-0 in Semo Conference Play. Link To Standard Democrat News Article
In the JV contest, Sikeston was short on players; therefore, only one half was played. The result was a 0-0 tie. 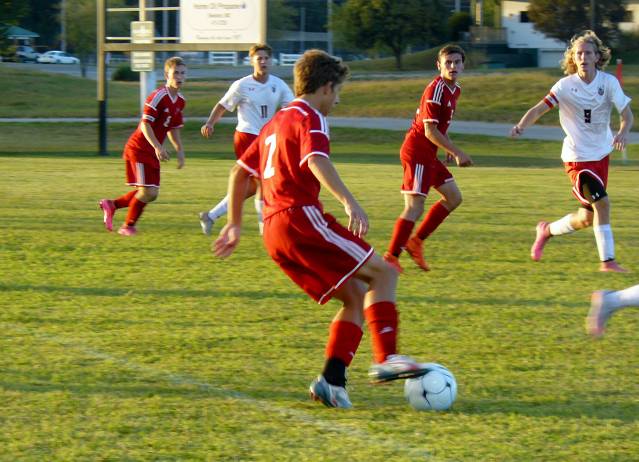 The Indians scored early and went on to defeat the Mules by a score of 4-1. Liam Gray netted two goals. Drew Brown and Justice Crosnoe added one goal apiece. In the JV matchup, despite outshooting their opponent significantly, the JV Indians came away with a 1-1 draw. 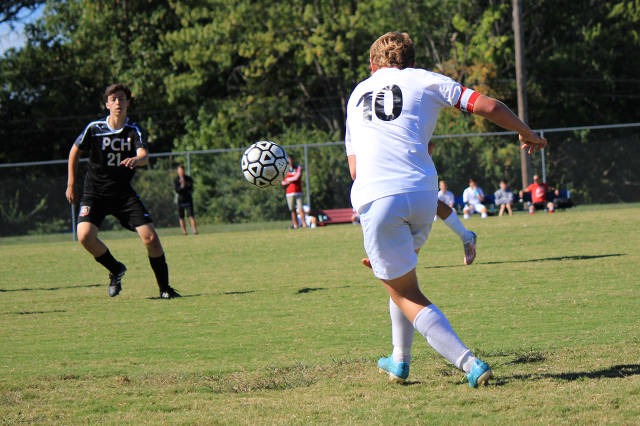 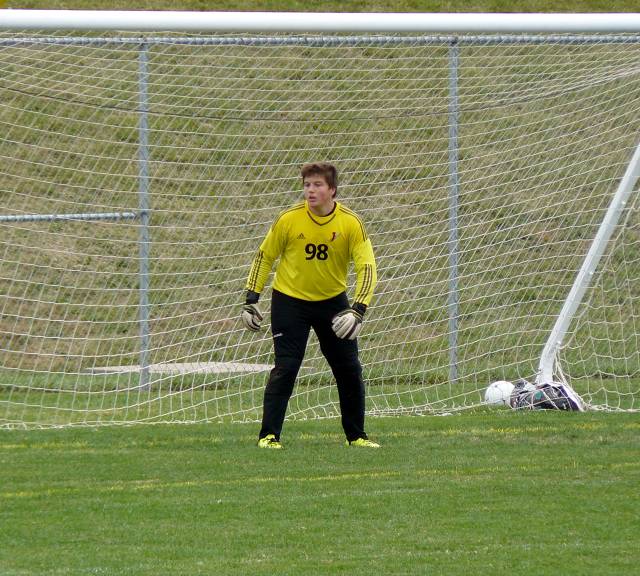 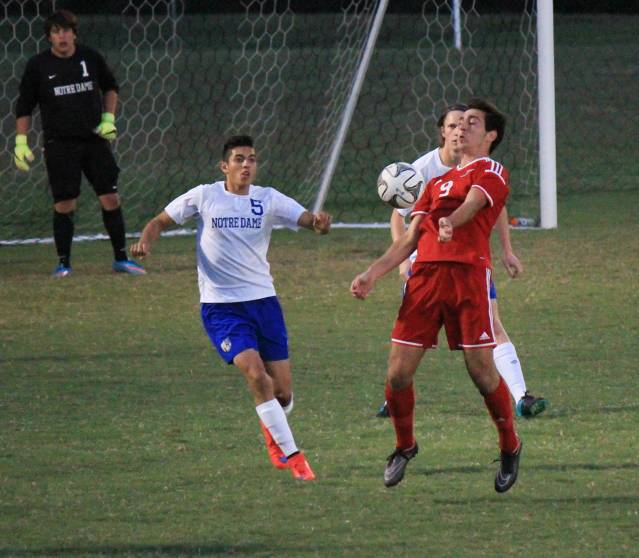 Jackson Gets Upended By Late Goal At Lindbergh

The Indians played a very even match versus Lindbergh; however, gave up the loan goal of the game with about 10 minutes to play. The boys had their chances, but just couldn't seem to get one into the net. The JV also fell, by a score of 3-0. 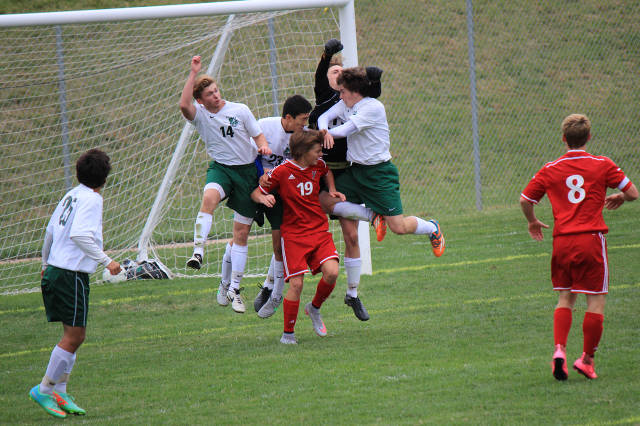 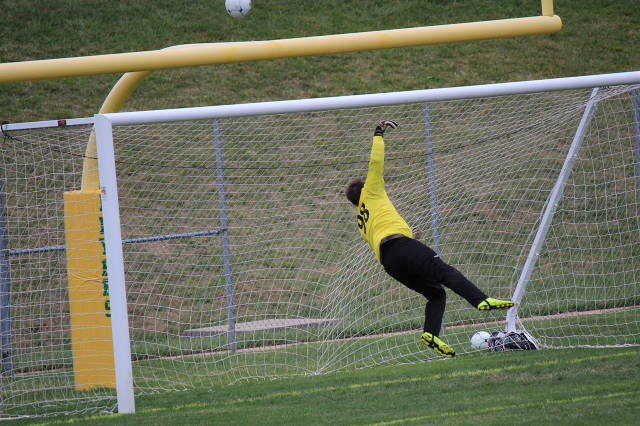 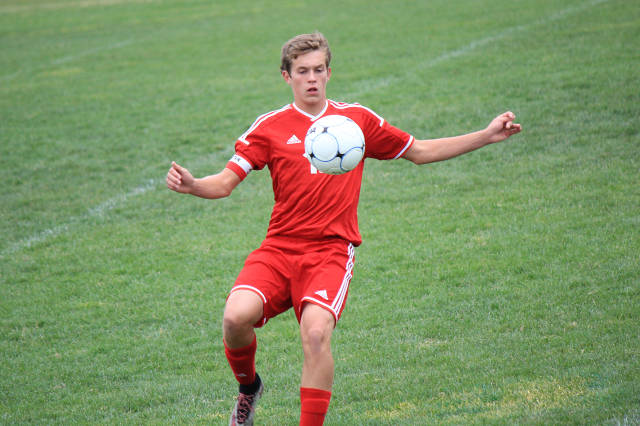 The Indians Take Down Cape Central 7-0

Jackson scored early and often, in defeating the cross town rival Tigers. Aaron Voshage, Josh Scholl, and Eion Vaughn each scored two goals. Hunter Kelpe added a goal, and Liam Gray recorded 3 assists. The Indians move to 5-0 in conference play. With a win next week vs Notre Dame, the boys will capture their 2nd consecutive SEMO Conference Championship. The JV team won their matchup with a strong 5-0 result. 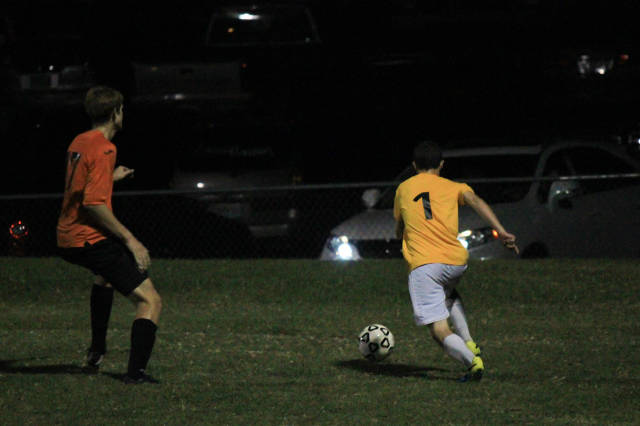 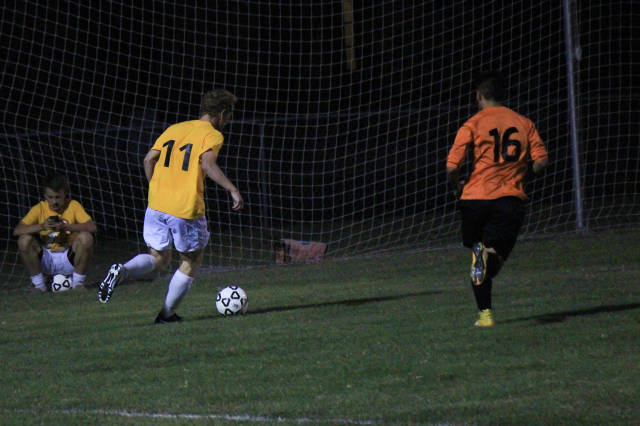 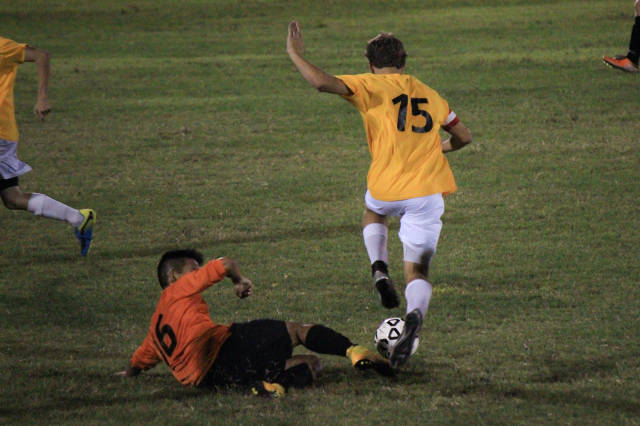 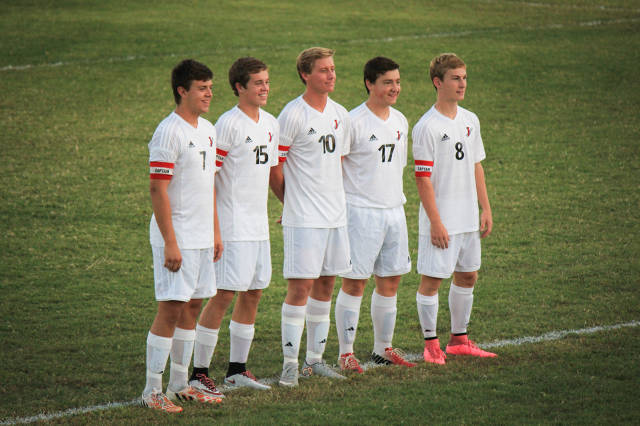 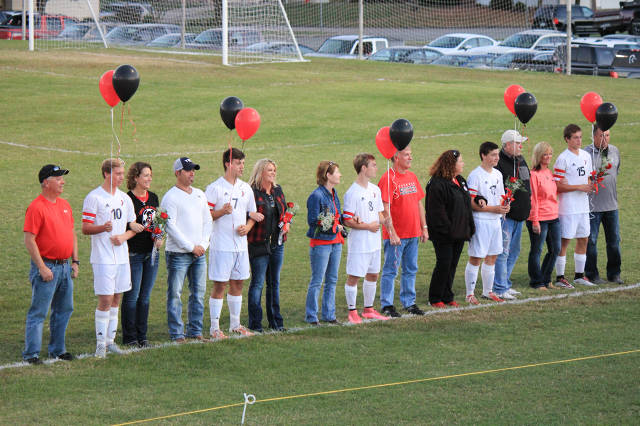 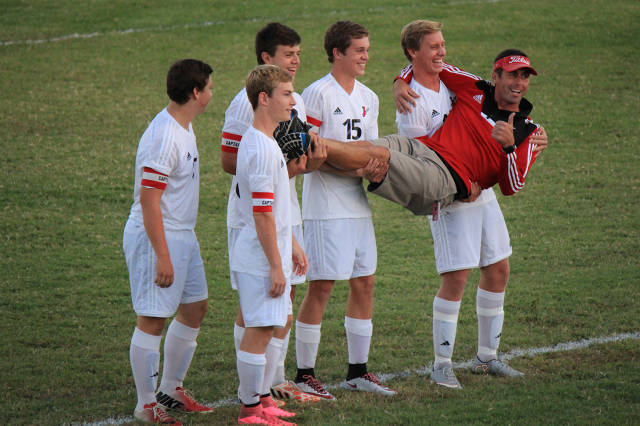 A Great District Win Over Northwest!

The Indians finally came out on the right side of a close, one goal game up in St. Louis. After allowing Northwest to tie it up 2-2 late in regulation, Jackson netted the winning goal a couple of minutes into the first overtime period. Individual goals by Aaron Voshage, Liam Gray, and Justice Crosnoe. Josh Scholl added two assists. The Jackson JV fell to the Northwest JV squad by a score of 1-0. 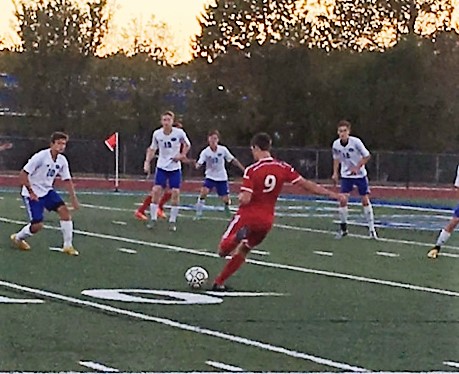 In their final regular season game, the varsity Indians scored 8 goals in the first half, and came away with an 8-1 victory! Most of the JV squad got the opportunity to log their first varsity playing time in the second half. Jackson finishes regular season play with a record of 14 wins, 3 losses, & 2 ties. 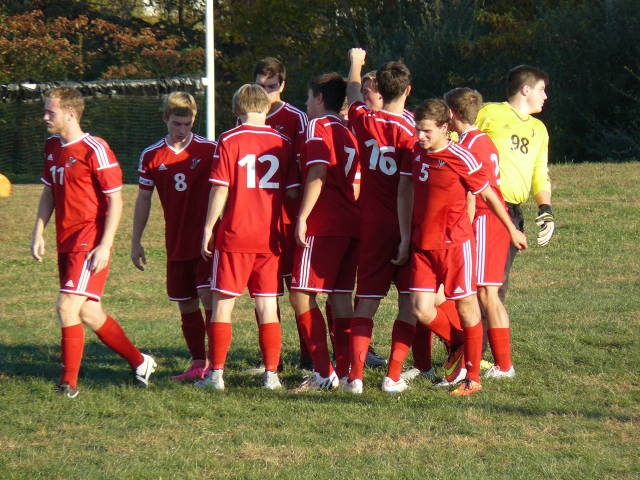 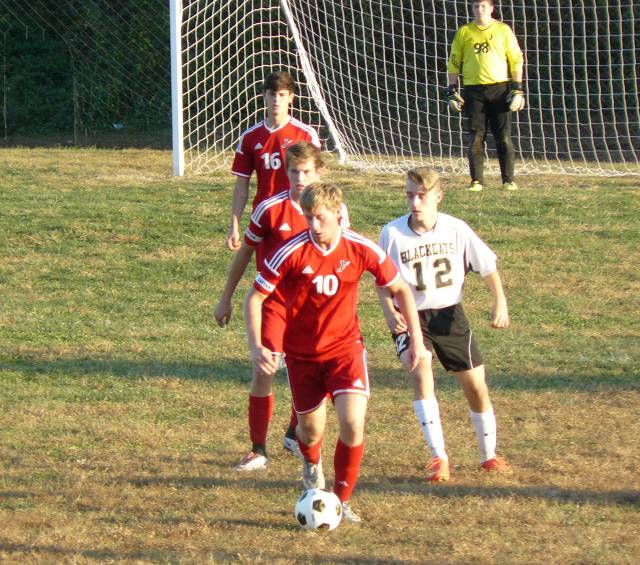 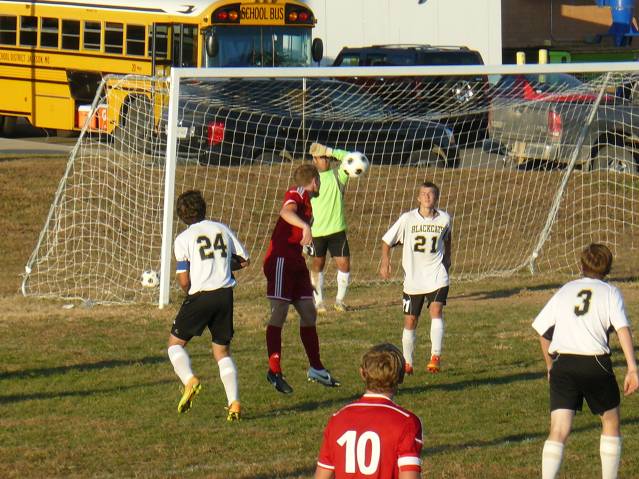 The Indians jumped out to a 2-0 lead with 2 goals by Josh Scholl in the first half, then held on to defeat Seckman by the final score of 2-1. The Indians play Eureka High School on Wednesday for the Class 4 District 1 Championship!

2015 - A Fantastic Season For The Jackson Indians!

The Indians 2015 season came to a dramatic end on Wednesday night in The Class 4 District 1 championship match. Although the final result was what not what the team was looking for, the team's accomplishments and resolve showed that they can compete with the top teams in the state. After falling behind 1-0 in the first half, the Indians equalized on a header by Drew Brown with 9 minutes to play in regulation. Throughout the match, the boys had a number of opportunities to score what could have amounted to a game winner; unfortunately, it was not to be. Eureka went on to net the golden goal winner in the early stages of overtime. Wow, what a dramatic game! The Indians have a lot to be proud of after finishing with a 15-4-2 record, a SEMO Conference Championship, and a 2nd place finish in Class 4 District 1. Our 5 seniors provided tremendous leadership in attaining each of these accomplishments, and therefore, will be greatly missed next year! Looking forward, this fantastic season should serve to set up next year's returning squad with an opportunity for great things in 2016! 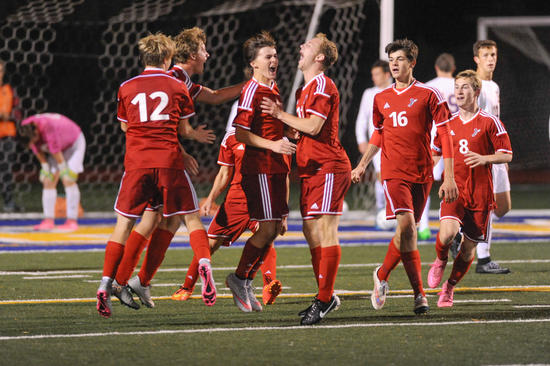 The 2013 Season Ends With A District Semifinal Loss

The Indians fought hard, but ended up with a 3-0 loss to Seckman in the semifinals of the Class 3 District 1 tournament.

The Indians posted early goals, and then cruised to a 10-0 win. Led by two goals each from Clay Darnell, Ryan Harvey, and Josh Scholl, Jackson displayed strong team play throughout the match. With the win, Jackson completes the 2013 season with a final SEMO Conference record of 4 wins and 2 losses.

The Indians Win Over Perryville On Senior Night

This one's for the seniors! With the Indians defense playing a stellar match, Ryan Harvey scored near the end of regulation to even the score at 1-1. In the second overtime period, senior Mikey Depuy served up a nice corner kick that Liam Gray was able to send into the net, for the dramatic win over the Pirates.

The Indians and Bulldogs evened their season series after Notre Dame registered the win in Jackson on Wednesday night.

Jackson lost on the road Saturday, after a late PK gave Rockwood Summit the 2-1 win. 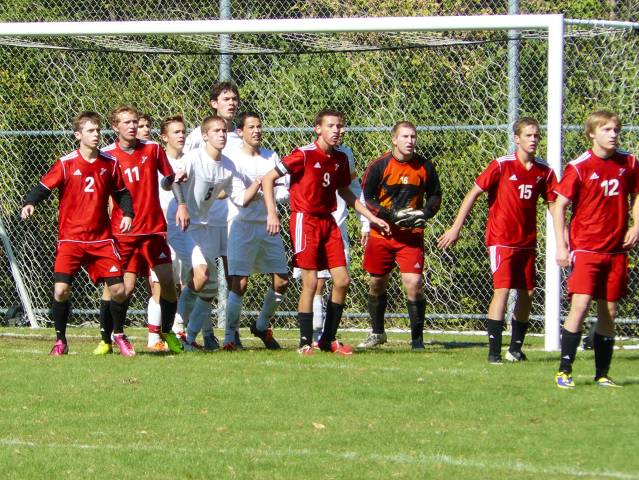 Jackson avenged it's previous overtime loss to Cape by winning 5-0 on Wednesday night. Senior Kendall Townsend recorded a hat trick with his three goals. Liam Gray added a goal and three assists, and Josh Scholl had a goal and an assist. In the JV contest, Colten Weber converted on a penalty kick to give Jackson a 1-0 victory over the Cape JV squad.

An Overtime Thriller In Farmington

Jackson and Farmington played 80 minutes of regular time 0-0. In overtime Farmington managed a slippery goal on a wet field to end it at 1-0. The JV squads played to a 1-1 draw, with Colten Weber scoring on an assist from Drew Brown.

A Road Loss At Lindbergh

Jackson traveled to St. Louis to take on Lindbergh High School on Saturday. After a 0-0 first half, the varsity couldn't hold and finished with a 3-0 ending score. The JV also lost by a final of 2-0.

The Indians and Bulldogs squared off in an evenly matched game on Wednesday night. Jackson scored with under three minutes to play to earn the 1-0 victory on Notre Dame's home field. The Jackson JV played well against a deeper Notre Dame JV, and managed a 0-0 tie.

The varstity took down Poplar Bluff for the second time this year. Josh Scholl scored the lone goal of the game, for a 1-0 outcome. The junior varsity also played very well, and managed a 1-1 tie against the Mules' JV squad.

The Indians Fall To Parkway South

After managing a 2-2 tie versus the Patriots in their prior matchup, the varsity traveled to Parkway South on Friday, and lost by a final score of 3-0.

Seckman traveled to Jackson brandishing an 11-2 record on Wednesday night. With goals by Liam Gray and Mikey Depuy, the Indians jumped out to a 2-0 first half lead. After allowing a late second half goal, Jackson held on for the 2-1 win.

A Nice Win On The Road In Sikeston

Led by a very strong defensive effort, and two goals from Hunter Crowden; the Indians come away with a much needed 3-1 win against Sikeston!

The Indians played their hearts out in a tough back and forth battle with Cape. The deciding goal was scored with 19 seconds remaining in the final overtime period, for a 3-2 final.

The Indians completed their three games of the Parkway Tournament. They fell 2-0 to Parkway Central in the first game. They then made a strong comeback to tie Parkway South 2-2 in their second match. In their final game, they lost another close contest, 1-0 to Parkway North.

The Indians Fall to Mehlville.

The Indians suffer a tough loss to a very skilled Mehlville team. Despite a valiant effort, the Indians were seemingly overmatched against a deep Mehlville squad filled with upperclassmen.

In the first half, the varsity Indians produced the only goal of the game, when senior Kendall Townsend received a touch pass from Mikey Depuy and deftly placed the ball past the Carbondale goalie. In the junior varsity game, the JV Indians improved their record to 1-1, with a convincing 3-0 win over the Carbondale JV team.

The Indians Notch First Win Of The Season!

In their second round game of the Notre Dame Soccerfest, the Indians knocked off Poplar Bluff in overtime by a score of 3-2. 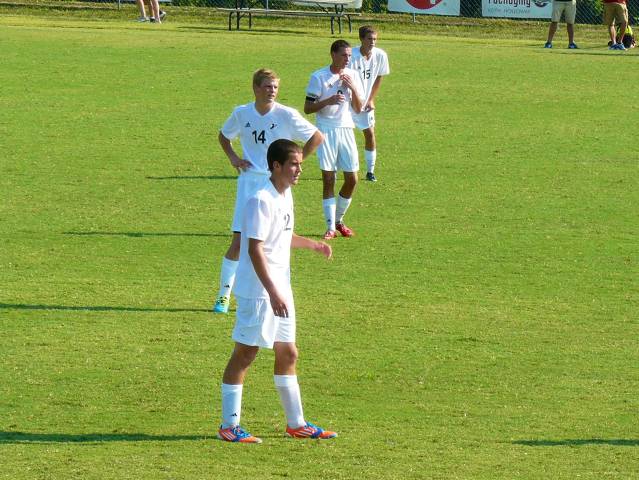