This year the Wizards finished in 3rd place and picked up $50.  Our first prize money win!    Thanks to the guys who traveled a fair distance to attend.  We have another great bunch of guys and will have a great 2020.   Clarke and the Burlington tournament crew did another great job. It is always a great way to close out a season in Burlington. 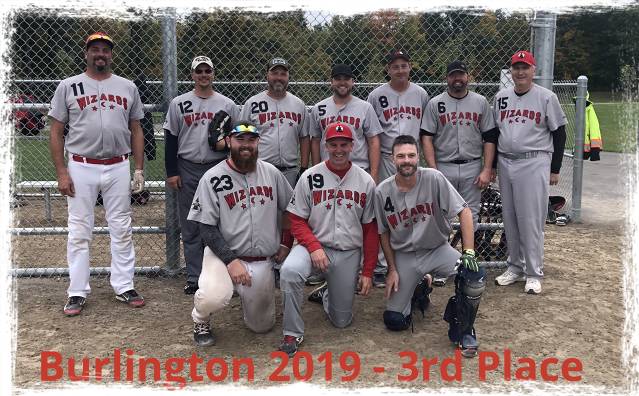 We added the #'s to the upper right hand side of the uniforms this year.   A bit easier to see for score keeping and a bit of a unique fashion approach :-)

We only got to one tournament this season, Aug 17-19.  The Niagara Falls  August season wind down.   We managed to get to the B semi finals. 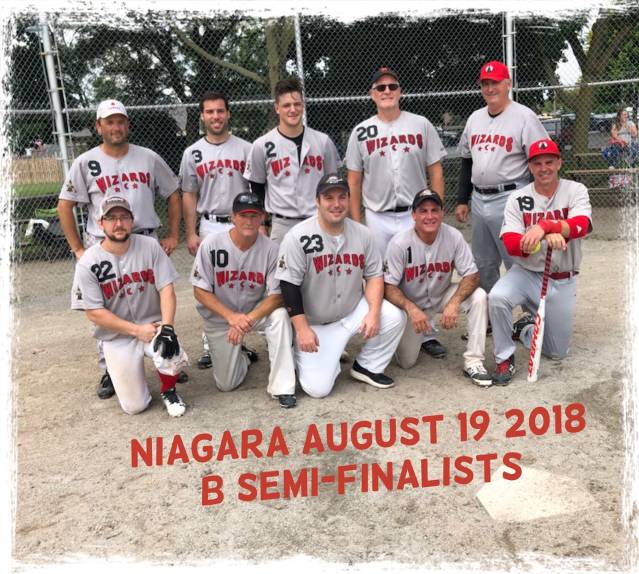 Here we faced Utoff  from Orillia Sunday morning.   We were able to walk away with an 8-0 victory against a very young team.   Sunday afternoon we met the Dawgs of Niagara in the D Final.  We had great pitching from Billy Carson but the bats had a lot of holes and seemed bent.  We lost 3-1.

I would like to thank the guys who had along drive from Owen Sound and Brockville. Very nice to see the effort to come and play fastball. 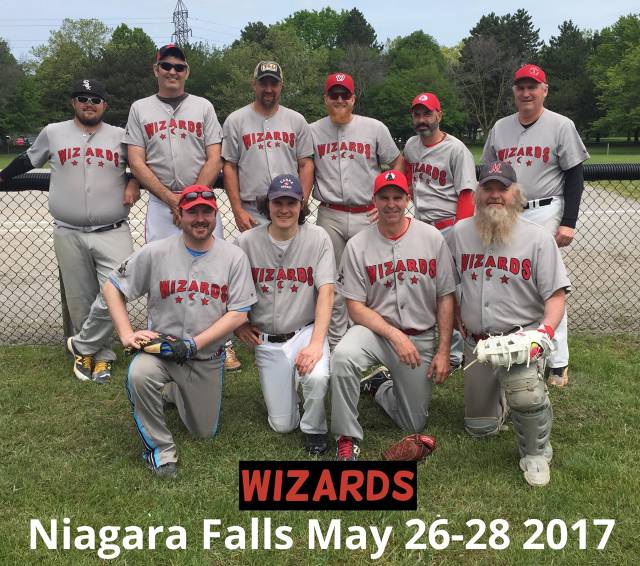 This one was out first trip to Richmond Hill.  We hit some stiff competition. A nice diamond. 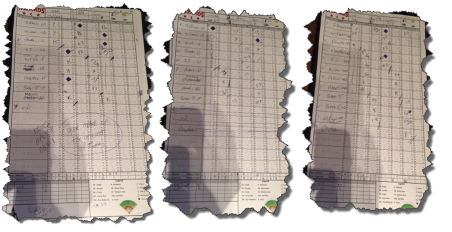 The second trip to Niagara 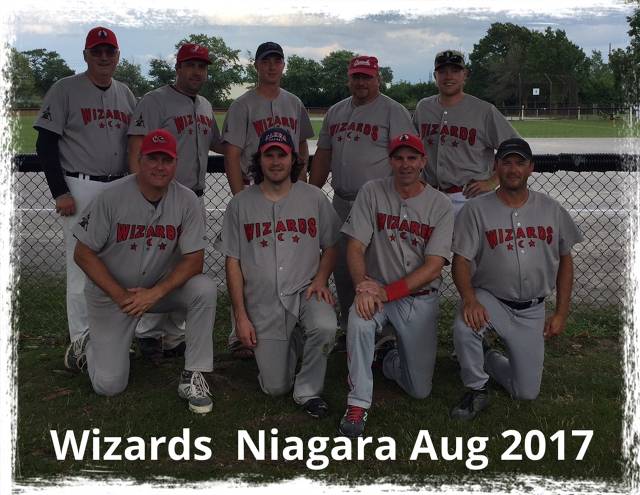 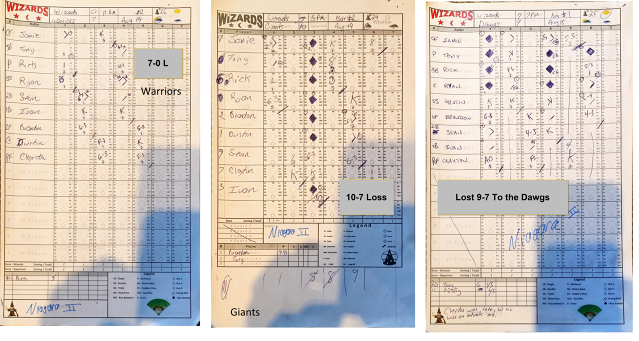 Wizards ran into some weather, as usual this time of year. Not as bad as 2015 though.

Thanks to the Ottawa boys, (Hugh, Jeff & Derek) always great to have quality guys come out. 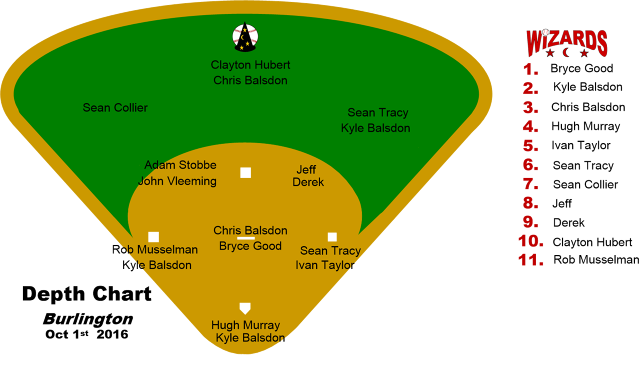 The Wizards were in the hardest division. They nearly stole the game from Woodstock. 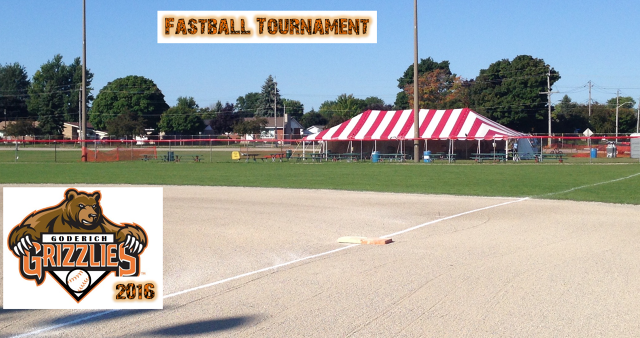 A VERY cold weekend and the Wizards went 1-2  Almost pulled off a win to go to the semi-finals.

Here is the break down of all the stats and our record in the tournament.

The team has had a number of outings at the batting cage and we have scheduled two indoor workouts March 15th and 20th at Bechtel Park. We have a few new faces coming out with us who may join the team in 2009. We are still recruiting in the pitching department.

The KFL meeting will be on March 12th and it looks like about 11 or 12 teams for the upcoming season.

We had our first get together at the batting cage last Thursday. It seems we have a very eager squad this year and players are keen on getting the team put together. This Thursday we will repeat the drill which includes heading to the Fox and Fiddle on King St. for a little post hitting wrap up.

The team has also booked Bechtel Field House for two indoor sessions next month. Sunday Mar 15th from 3:30pm to 5:00pm and again the following week Mar 20th on a Friday from 5:30pm to 7:00pm Our coaching staff will have drills worked out and pitchers will start throwing. More details will be mailed to the players as the date nears.


January 27th
The Wizards are looking to add another pitcher to the roster in 2009. This will make us more competitive in the very tough KFL and also enhance us on the tournament circuit. Most players are returning and we expect to only have a couple of changes with position players. We are waiting on decisions on a couple of guys before we decide on further recruitment.
Stay tuned for more Fastball news as we slowly move towards the 2009 season.

January 18th
The first executive meeting of 2009 was held at Edelweiss Tavern. Plans for the upcoming season were discussed. The coaching staff will consist of Rob Musselman, D'Arcy Smith and Matt Fries. Sean Tracy will look after all management responsibilities and relinquish on-field coaching duties.

The team will begin indoor workouts Thursday, February 6th at Max's Golf Dome & Batting Cages, near St. Jacobs Market. An email will be sent out providing specific details. We are going to investigate other venues for indoor workouts on Thursday nights.


January 11th
2009 Planning is in full swing and we are now looking to begin confirming players for the up coming season. Late this month we will start making our way to the batting cage. An email will be sent out soon with more details.

The team is formed to play in the Kitchener Fastball League in the 2008 season.

December 2nd
As the winter has made its presence known, the planning for 2009 is beginning to take shape. We attended the fall league meeting and it looks like it will be a strong 12 plus league in 2009.

We are going to use the information gathered from our team 'polls' and information from player/fan and league input to enhance the team and make it more competitive in the upcoming season. In 2009 the Wizards will be sporting new Flex-Fit hats with the team name in black across the back.

We are beginning to recruit for next season, so if you are interested in playing please contact us from the team 'contacts' page. We have a few positions open and are looking for more pitching.

Wizards Team Party: We had an average turnout for the team party held last Saturday night at Edelweiss Tavern where we have gone throughout the season.

Also, the KFL is having the year wrap up meeting this Wednesday. I will put up a summary of any interesting facts or changes being considered for the up coming year.


KFL All Stars:
The league has named all stars for each team based on a number of factors including, game all star voting and outstanding play recognised by other teams.

We have two players who reached all star status and they are, pitcher D'Arcy "Magic Man" Smith and center fielder Jon Gray. Congratulations on the fine effort put forth in 2008.
For more information and other team all stars visit the league site. 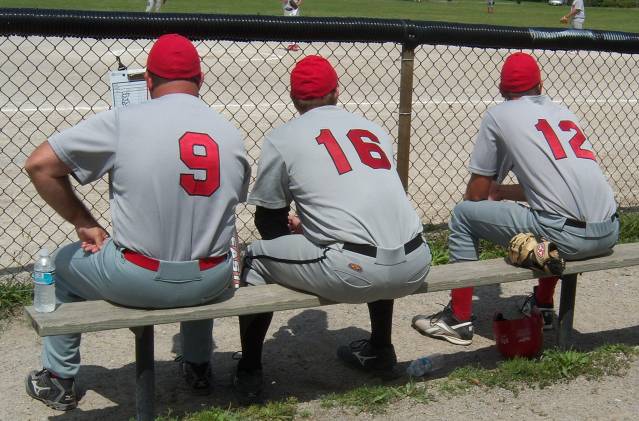 3. Pittsburgh
The Pittsburgh tournament was a great time had by all. We played 3 games that we could have gone more our way but with limited pitching we were always behind. The offence was lead by Rob "Crash" Mussleman who was on base nearly every trip to the plate. It was our first experience with wooden bats and we hope it catches on as it really makes a team earn their way on base. This was a great way to finish off the year. 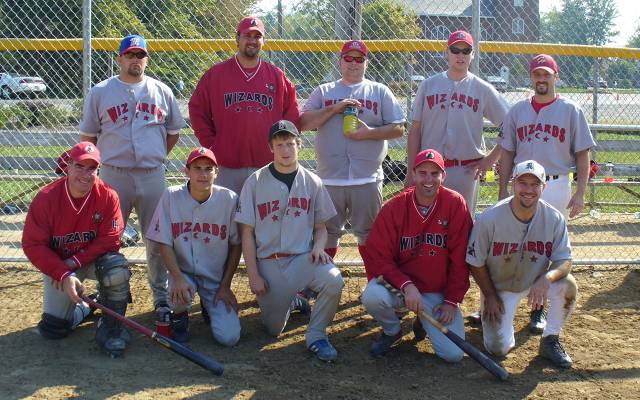 2008: The year in review
The Wizards took the field 34 times this season, combining league and tournament play. Our combined record was 5 wins and 29 losses. We finished in 11th spot out of twelve in the KFL. This being a very competitive league and it was our first year, we managed well. Also, we traveled to three tournaments. Hillsburgh Ontario, Niagara Falls Ontario and finally Langeloth Pennsylvania (Near Pittshurgh) USA.
We look forward to building on what we learned this season. One things is for sure, we will continue to have fun and promote the amazing sport of Fastball.