Haley Kindall has been named a player to watch out for this upcoming season.

Also, congratulations to the following 2013 Warhawks on their post-season awards:

Congratulations to 2013 WCHS graduates Haley Kindall on being named 2nd Team All-Conference and Mountain East Freshman of the Year.

Read more about Haley in the Mountain East. 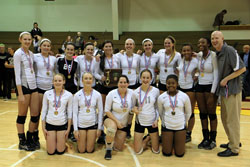 The 2012 Westerville Central Warhawks set a number of team accomplishments during the past season. Listed below are some of the key highlights:
- They captured their second straight Conference title going 14-0 and not losing a set.
- They set a school record with 20 straight victories and will continue a conference winning streak of 29 matches going into 2013.
- They climbed to #11 in the State Rankings
- The set new school records for regular season wins with 20 and total wins with 23.
- AND they won the first ever District championship in school history for Girls Volleyball.

Congratulations to the following 2012 Warhawks on their post-season awards:

Huge congratualations are in order for Senior co-captain Adrienne Agee. In addition to earning 1st team honors in both the District and the OCC Conference, Adrienne was also selected as District and OCC Player of the year. And now topping these accomplishments, Adrienne has secured a 3rd Team spot on the Division 1 All-Ohio Team. These are the highest honors (Player of the Year, 3rd Team All-Ohio) ever received by a Westerville Central Volleyball Player.

Congratulations to Haley Kindall who signed a letter of intent to attend and play volleyball at Wheeling Jesuit University in Wheeling, WV. Wheeling Jesuit currently participates in the West Virginia Intercollegiate Athletic Conference (WVIAC) at the NCAA Division II level. However, they will become a charter member of the newly formed Mountain East Conference (MEC) starting in 2013. Click the respective links to learn more about the Cardinals Volleyball program or Wheeling Jesuit University. Congratulations Haley!! Here is a link to the recent update on her signing in the Westerville News and Public Opinion.

Congratulations to Jayla McCrary who signed a letter of intent to attend and play volleyball at Alderson-Broaddus College in Philippi, WV. Alderson-Broaddus currently participates in the West Virginia Intercollegiate Athletic Conference (WVIAC), but will be switching to the Great Midwest Athletic Conference (G-MAC) in 2013. Both leagues compete at the NCAA Division II level. Click the respective links to learn more about the Battlers Volleyball program or Alderson-Broaddus College. Congratulations Jayla!! Here is a link to the Alderson Broaddus Press Release

After being named District Player of the Year, Adrienne Agee got the opportunity to play in the All-Ohio Division 1 All-Star match on Sunday, November 18. Go to the All-Star Game Photo Album to see some pictures of the All-Ohio team and Adrienne receiving her awards and some congratulations.

The Westerville Central Girls Volleyball team enjoyed another record setting season in 2011.
- The team captured their first ever OCC Cardinal conference crown going 14-0 in conference play.
- They set the team record for conference wins with 14 and matched the 2009 overall record of 20 wins.
- The team had 6 girls named on the All-OCC Cardinal list of honorees and had 2 players named All-District.
- 7 new career or season records were set by players during the 2011 season.


- Congratulations and thanks to the two departing seniors and 2011 captains!! Erin Cisneros and Hannah Hetterscheidt.

Congratulations to the following 2011 Warhawks on their post-season awards:

For a full player listing of all OCC honors, go to the Media Coverage Page.

The Westerville Central Girls Volleyball team enjoyed a record setting 2010 season.
- The team returned to the District Finals for the first time since 2005.
- They matched the 2009 team record of 12 conference wins and had a stellar season with 17 overall match victories.
- The team had 6 girls named on the All-OCC Cardinal list of honorees and had 2 seniors named All-District.
- 8 new career or season records were set by players during the 2010 season.

- Congratulations and thanks to the three departing seniors and 2010 captains!! D.J. Chadwick, Trisha Clark, and Kelley Plas

Congratulations to the following 2010 Warhawks on their post-season awards:

The Individual Records and Honors/Team Records pages have been updated to include the 2010 season statistics.