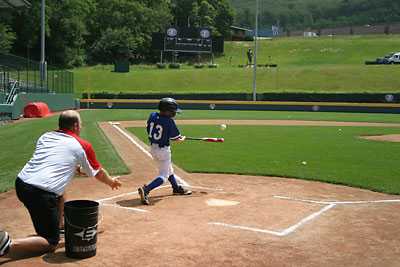 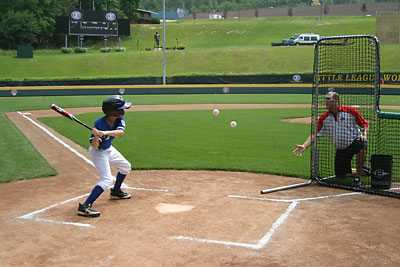 Tee Ball:  Parents- Try this one at home:

Whether the motion is scooping, slapping or stationary you are teaching position of the glove for catching the ball.

Other suggestions include drawing numbers or different colored dots on the balls and asking the players to yell out what they see on the ball before they hit it.

(This drill was written to be used during a team practice, but can be used when practicing fielding on your own.)

...
Remember the triangle. Before you begin fielding, line your players up with some space in between them. Have them set up with their feet about shoulder width apart. Now, have them reach their glove out on the ground in front of themselves about the same distance as the width between their feet, as if they are fielding an imaginary grounder. Have them hold the position, and point out that the three things on the ground - each foot, plus the glove - form the points of a triangle. This is the ideal position for fielding a ground ball; feet too close together take away the ability to move laterally, a glove too close to the feet gives no room for error when scooping up a grounder.

Use both hands. This is possibly the most critical aspect of fielding grounders that you can teach, and is oddly enough, the one most often ignored. When set to field a grounder, the glove should be placed on the ground, and the other hand should be open, above the glove, with the heels of the hand fairly close together (the analogy used for younger players is that of an alligator's mouth).

When the ball enters the glove, the secondary hand should automatically close over the ball and gather it in; not only does this ensure that the ball won't pop out, but it places the fielder into a favorable position to make a throw. The further, and less obvious benefit, is that balls that skip off of the heel of the glove cannot pop up and hit the fielder in the face if this basic fundamental is employed; the top hand will simply deflect the ball back down into the dirt where it can then be recovered.

Start low, then come up high. Teach your kids that, when fielding a grounder, they should always begin with their glove all the way on the ground. If the ball takes a hop, they can bring their glove up to it; even if they misjudge, odds are excellent that their top hand and/or their body will block the ball and keep it from going past.

However, if the player tries to start with their glove high and then go down to the ball, they will invariably let grounder after grounder go between their legs.

Keep soft hands. Ground balls come in with so much velocity that they will frequently bounce out of even a perfectly placed glove. Bringing the second hand in will help this, but sometimes, the ball will still pop out in the time it takes to bring that hand down.

The best way to reduce this effect is by having soft hands. In other words, teach your players to not lock their elbows in, thus presenting a brick wall for the baseball to ricochet off of. Instead, they should "give" ever so slightly - this will reduce the energy of the baseball enough to prevent it from popping out. If you have a player who always seems to get into the right position for fielding, who uses two hands, who gets his glove down, and yet still seems to lose a lot of balls, odds are excellent that he has no idea what soft hands are.

Watch that footwork! The first instinct that many young fielders have when fielding a grounder not right right at them is to turn to the side and run towards the ball. Unless the fielder is trying to make a stab at a ball deep in the hole (and even then they should give ground, taking a proper angle), this is the wrong way to do it.

If the player turns his head and runs, he loses track of the ball. Since the first rule of pretty much every phase of baseball is some variation of "keep your eye on the ball," we know that this cannot be correct! Furthermore, even if the fielder can pick up the ball in time, he then must turn his body and reset his feet in an effort to get back to a good "triangle" stance.

Instead of turning and running, players should "slide step" to the side, allowing them to keep the eye on the ball. Further, this allows for a simple stop in motion to place the fielder into proper triangle form. Practice this by lining your players up with several feet in between them, and have them simply "slide" to the left, then to the right. Repeat this for a minute or so, until you have them breathing nice and hard.

The idea is that they should be stepping wide to the side, then following the other foot over until their heels almost click together. In younger players, this will be somewhat of a hopping motion, but as they become more accustomed, it should become second nature and more of a glide.

You don't have to practice footwork every time you meet, but you should emphasize it and correct bad footwork whenever you see it.
...