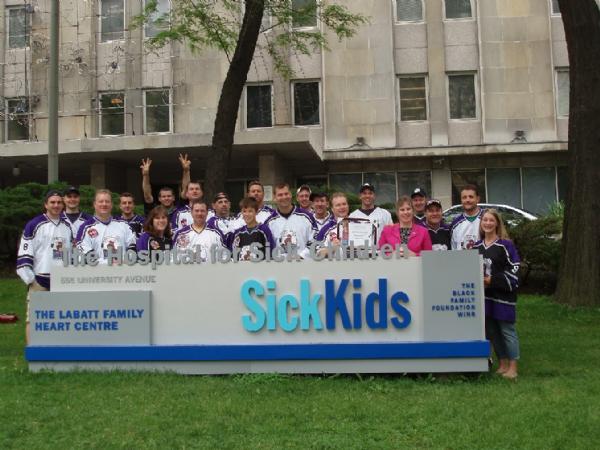 TORONTO -- The Detroit Moose Hockey Team went to Toronto last week with two goals in mind: Scoring a lot of them in the Hockey North America Championships and bringing smiles to the faces of hundreds of children at the Hospital for Sick Children in downtown Toronto.

The team is proud to say they accomplished both.

The 15-member team and two members from the Detroit Ducks, clad in their hockey jerseys, trekked by bus from Detroit to the hospital and delivered 16 full boxes of toys and crafts for children who are undergoing treatment at the hospital. The Hospital for Sick Children, affiliated with the University of Toronto, is Canada's most research-intensive hospital and the largest center dedicated to improving children's health in Canada.

The Moose also won the HNA Tier 3 League Championship on Sunday by defeating the Cleveland Icemen 6-5.

Members of the Moose donated over $1,000 in cash and the team received another $1,000 in donations from Detroit area businesses to bring to the hospital. Moose Captain Derek Fowler used the money to buy the toys and crafts for children at the center.

The visit to the hospital hit close to home as several of the team members work in the medical field, including Dr. Zach Lewis, Alec Lesko, Nate Schmoekel and Mark Auger.

``The greatest gift is giving! There is no greater love than the love for a child and I hope the toys will help a little to dry any tears of pain. Every child deserves an equal chance,’’ Fowler said during the visit to the hospital.

After carrying the boxes in, Moose team members took a tour of the giant hospital given by Penny Kroll, a Community Involvement representative for the SickKids Foundation at the center. Kroll said many Canadian dignitaries visit the hospital to meet with the children for such activities as a reading hour, including members of the Toronto Maple Leafs hockey team (and maybe one day the Detroit Moose).

SickKids Foundation is the largest non-governmental granting agency in child health in Canada. Established in 1972, SickKids Foundation has granted over $500 million to The Hospital for Sick Children and over $60 million to researchers across the country, according to Kroll. She said the mission is to inspire communities to invest in health and scientific advances to improve the lives of children and their families in Canada and around the world.

The hospital cares for over 100,000 patients per year, doctors there perform open-heart surgeries on babies small enough to fit in the palm of your hand, and doctors attempt to heal deformities, heal cancers, and treat massive burns on children.

According to the hospital web site, `` We've invented treatments that 20 years ago people would have dismissed as science fiction. Your support has led to discoveries that have meant less pain for children, a higher survival rate and less time in hospital.’’

Kroll added that the financial support helps fund life-changing equipment and facilities and enables the hospital to attract the best doctors, researchers and nurses in the world.

``Thanks again for the wonderful boxes of gifts that you brought for the kids in the hospital,’’ Kroll said to the team at the hospital. ``Everything will be put to good use and will help make the experience for those kids who will use it in the hospital that much more enjoyable.’’

Fowler also wanted to give his word of thanks.

``I want to say `Thank you’ to the team players who believed in what we were doing and never being confrontational during the season,’’ Fowler said. ``They dug very deep in their pockets so we could go out and buy the toys and crafts on the wish list from the hospital.’’

Bob Rates at Nankin Hardware and Hobby in Westland, MI, worked with Fowler and charged only his cost on the toys and crafts. He also made a large personal donation of crafts, toys and gifts for the kids.

``I’d like to thank Bob for believing in our cause and thank Bob and Nate Campbell from the Ducks for joining us at the Hospital for Sick Children,’’ Fowler added.

In addition, the team and Kroll wanted to thank Dr. Pinkney, Greenbaum & MacFarland Dentistry of Canton Township, MI, for giving a substantial donation of dental hygiene products to the children and families of the Hospital for Sick Children. Armand’s Meats of Northville also gave a donation as well. The dentist office gave tooth brushes, tooth paste, floss and many other dental products as a donation to the facility.

``We had such an outpouring of support, especially from the dentist office, for our cause,’’ Fowler added. ``I’m so proud of everyone who gave from their hearts to help out these children and families.’’

Charity service isn’t new to the Moose. Earlier this year members of the team worked at a soup kitchen in Detroit to help feed needy people and families. They also gave a $250 donation to the soup kitchen. The team also plans to perform several community service events this year as representatives of the Detroit Moose and Hockey North America, such as a coat drive for needy families.

The Moose is sponsored by a group which supports the victims of 9/11 and the sponsor has been an important part of the team this year. Each Moose player wears a patch on their jersey which honors the victims of September 11th.