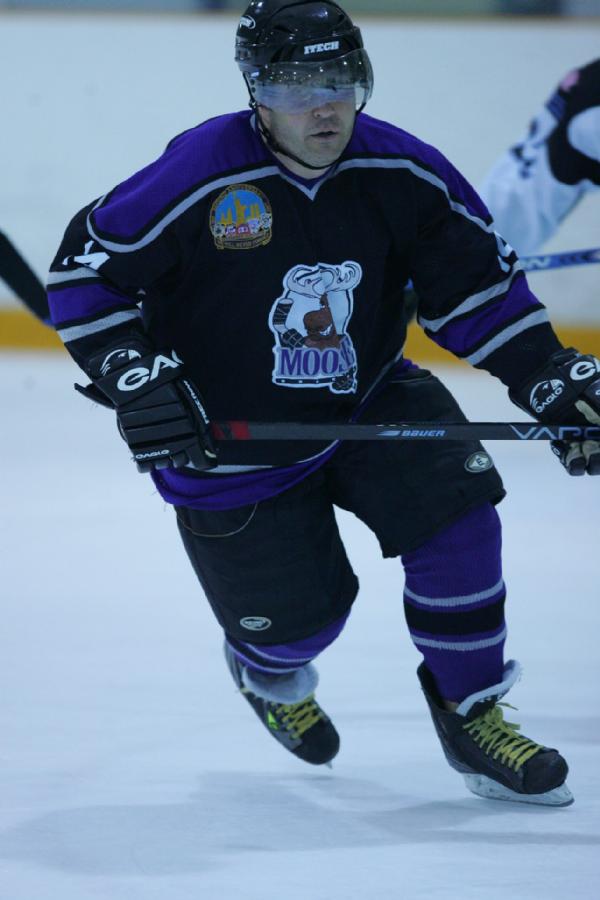 DETROIT -- The Detroit Moose scored so many goals Friday night that it broke the scoreboard. That’s how it appeared anyway in the Moose’s 11-1 electrocution of the Detroit Shock in Hockey North America action at Melvindale Arena.

Moose Captain Derek Fowler was on fire as he netted one goal and four assists in his finest performance of the year. Moose assistant captain Alec Lesko punched in his first hat trick of the season and gained 6 points on the night.

The electricity was certainly in the air as the Moose fan club, led by Pat Renner, cheered on the undefeated team, which gained its fourth win of the season. Strangely, just after the Moose scored its 11th goal with about 5 minutes to go in the third period, the scoreboard malfunctioned and shut down, leaving Moose teammates wondering aloud if they broke the scoreboard.

The Moose stampede started quickly as Joe DeMarte flipped in his third goal of the season on a fine pass from winger Ryan Renner and defenseman Brian Big Daddy Harlow. A minute later Harlow blasted the puck faster than a Joel Zumaya fastball past Shock goalie Jim Carr for the Moose’s second goal. Fowler nabbed his first assist of the night on the play.

A player from the Shock assisted on the Moose’s third goal when he tipped Moose defenseman Ron Kruse’s shot into the upper corner. Renner set up the play, which put the game at 3-0.

Moose defenseman Jeff Lazuka had partner Alec Lesko to thank for the team’s fourth goal a couple minutes into the second period when Lesko twisted, spun, shimmied to the left, but then got tied up by a Shock player. Lazuka, trailing behind, picked up the loose puck and fired it behind Carr.

But the Shock came back and scored its only goal of the game on Moose goalie Tom Varcie after a miscue on a rebound.

``I ruined my own shutout on that play,’’ said Varcie after the game. ``I stopped the first one and just lost sight of it. It’s just one of those plays you wish you had back.’’ The netminder faced 13 shots on the night.

But the Moose charged back with Fowler sinking in his first goal of the year. As Fowler powered his way to the net, the Shock goaltender got caught too far out. Fowler deked around him and shot it into the corner. A minute later Lesko made it 6-1 on a tremendous breakaway play.

The team’s seventh goal was one that may be shown on ESPN’s Top Ten Plays segment. Forward Zach Lewis was on the right side of the net in the Shock zone. He fired the puck toward the goal from behind the net, it ricocheted off two sets of skates and bounced into the net.

``I practiced that play for months,’’ Lewis joked after the game. ``I actually planned that shot. The Lazuka-Lesko defensive duo assisted on the play.

Lesko and Fowler teamed up to punch in the Moose’s eighth and ninth goals of the game and Moose newcomer Phil Ross took the team into double digits with his fourth of the season. Lewis finished up scoring on the night on a fine passing play from Lesko and Fowler. Less than 20 seconds later, the scoreboard wore out and the game played scoreless for the next 5 minutes to finish out.

``The Shock are a good hockey club and there are great, classy guys on the team,’’ said Fowler afterwards. ``My hats go off to Jim Carr who played outstanding in net for the Shock. He made some excellent saves and it was like watching a magician pull rabbits out of his hat.

``Our team only had nine players tonight, but we won as a team and accomplished it together. We all play for the Moose name on the front of the jersey, not the name on the back,’’ Fowler said (in Herb Brooks-esque type fashion).

``This was an all-around good win for the Moose. We passed the puck well, shot well, skated well, and had control of it the entire time,'' Lesko said. ``It was a good victory.''

The Moose takes on the Warriors at 4 p.m. next Sunday (Nov. 18) at Detroit City Sports. The Moose plans to have a benefit with the Wheelchair Hockey League of Detroit and play along with wheelchair athletes between the first and second periods of the game. Moose players will donate money for a pizza party afterwards and to collect money in the Toys for Tots program. The public is invited to attend and admission is free for the Sunday matchup.

Thanks again to the Detroit Moose 2007-2008 sponsors: Harlow Tire in Westland, Double H Manufacturing in Westland, 203 Custom Car works in Ypsilanti, and a group that supports the friends and families of victims of 9/11. Also, thanks to the Moose Fan Club, which cheered loud again at Friday night’s game. They were effective at doing the wave, beating the war drums and helping rally the team to victory.