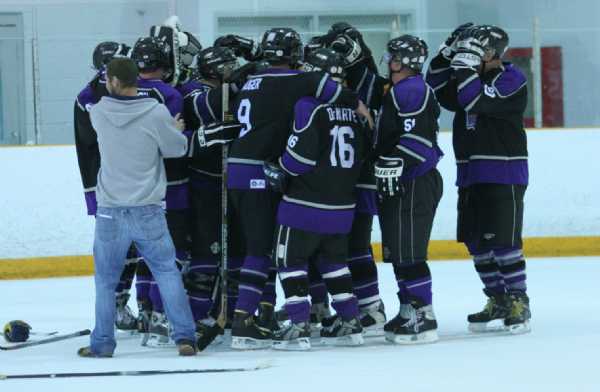 DETROIT -- With half the season completed, Moose Hockey Sports Editor Tim Vance gives his unbiased rankings and grades of each player. The Moose, now 9-1, seems poised for greatness this season as it continues on its mission toward another national championship in Toronto at the Hockey North America finals.

The Moose has racked up an impressive 84 goals in the first 10 games while only allowing 24. The offense is the most powerful of all HNA Detroit teams and one of the most feared offenses in North America – as seen by the team’s impressive victories 7 months ago against some of the nation’s elite teams.

Put to the test on the Tim Vance-ometer, here are the mid-season rankings:

#8 Alec Lesko (defense) – Simply put, Moose Assistant Captain Alec Lesko is the top player in Detroit Hockey North America – and definitely ranked in the top 10 nationally among HNA players. No matter what team he plays against, Lesko is a workhorse who can come out of virtually any situation on the ice and score a goal. Lesko has scored from his knees, from on his back, through his legs – and all while playing defense for the Moose. Bottom line: If you are a goalie and don’t want your goals against average to go higher, you might want to sit out the next time you play against Lesko.
Quick Stats: 24 goals, 10 assists, 34 points. PLAYER GRADE: A

#14 Derek Fowler (center) – Teased since birth about his thick, gnarled New York accent, Moose Captain Derek Fowler plays with all the intensity and passion of a New York City mob boss. All of his talent comes out at the face-off where Fowler overpowers the other center and with an over 90%win every time in the circle. Repeat: every time. He nearly had his face cut in half a few years ago during a game, but he still digs in the corner like a grave robber, no matter the size or matchup. As leader, the Monster-drink swilling Fowler brings an unblemished record complete with high morals and keeps the team together like no other captain. He is the team’s Mark Messier.
Quick Stats: 6 goals, 16 assists, 21 points. PLAYER GRADE: A

#51 Rudy Dauncey (winger) – Rudy Dauncey’s Canadian hockey blood spills into the veins of every Moose player. No worries about infection -- his only contagion is the game of hockey. Known as the Amateur Canadian Legend, Dauncey earned the title years back in the prairie woods of Saskatchewan (well, close to it – Windsor) and he plays with the same finesse that jettisoned Wayne Gretzky into the Hockey Hall of Fame. This season especially, many opposing players simply stand in awe at Dauncey as he maneuvers around the ice. He is truly one of the greatest the sport has ever seen.
Quick Stats: 6 goals, 8 assists, 14 points. PLAYER GRADE: A

#7 Joel Nettleman (defense) – Joel Nettleman isn’t nicknamed ``Spiderman’’ because of the Spidy-like hockey equipment and red tape he wears. Once Nettleman leaps on the ice, he snares the puck and it seems to entwine on his web-like stick. No matter how many players are going after Nettleman, he can always twirl and whirl away with his fancy footwork and spider-like moves. His most memorable Spidy moment came in an overtime game against the Calgary Wolves in the HNA national championship semi-finals last June when he scored the winning goal. He has the endurance to literally burn off an entire 2 minute penalty or the speed and moves to go coast-to-coast and score a goal. When Nettleman turns on the switch – watch out!
Quick Stats: 8 goals, 4 assists, 12 points. PLAYER GRADE: A

#26 Ryan Renner (winger) – Ryan Renner just can’t shake that former teen idol, surfer boy image. But does it really matter to the Detroit Moose assist leader? He’s dented quite a few goal posts this year and has come up empty-handed in the goal department, but Renner has 12 assists this year. He’s one of the best on the ice and certainly one of the best-dressed. The team also thanks Ryan for his role in continually bringing out the Moose fan club, aka ``Ryan’s entourage.’’
Quick Stats: 0 goals, 12 assists, 12 points. PLAYER GRADE: A

#97 Jeff Lazuka (defense, center, winger) – There’s a reason his nickname is Bazooka. The force of Jeff Lazuka’s slapshot often registers as a seismic wave on the Richter Scale. Most goalies simply move out of the way when he winds up. The few who didn’t have their headstone signed by Lazuka. But besides the shot, Lazuka has years of skill that has made him one of the best players on the team. He’s one of the most versatile and in one game he’ll play every position except goaltender. He’s also one of the fastest on the team. When it comes to racing against a bullet, the bullet usually loses.
Quick Stats: 7 goals, 4 assists, 11 points. PLAYER GRADE: A

#2 Phil Ross (center) – After the departure of a couple players last year, the Moose needed a white horse to come riding in. Enter Phil Ross – former captain of the ``old’’ Detroit Moose. All Ross has done since his arrival at the Moose is score goals and make assists. He flies through the ice like a U.S. Navy fighter pilot and swooshes around opposing players and goaltenders like they are stone statues.
Quick Stats: 5 goals, 4 assists, 9 points. PLAYER GRADE: A

#12 Nate Schmoekel (defense) – His slapshot is faster than a Joel Zumaya fastball and he’s so fast on skates, he’s almost like the sinister Invisible Man. Schmoekel’s shot has doubled-over goaltenders that got in the way of one of his shots. Through his aggressive play on ice and quiet demeanor off the ice, Schmoekel has become a fan favorite – not seen since the likes of former Detroit Red Wing Joey Kocur. If you’re playing against Schmoekel, count yourself lucky if you go into the corner against him and come out with the puck. It may only happen once in your career.
Quick Stats: 7 goals, 1 assists, 8 points. PLAYER GRADE: A

#11 Brian Harlow (defense) – He’s not called ``Big Daddy’’ for nothing. The defensive standout for the Moose rarely lets anyone into his zone. And if they are lucky enough to make it in there, chances are Brian Harlow will stop them cold. Harlow is full of grit and snarl and he eats tires for breakfast. Harlow no doubt is one of the top defenseman in Detroit Hockey North America. He’s also one of the most feared in the league and has a wicked slapshot that can rip a goalie’s hand off. Any goalie care to prove it?
Quick Stats: 2 goals, 6 assists, 8 points. PLAYER GRADE: A

#1 Tom Varcie (goalie) – Sometimes I wish I could play as well as Moose goalie Tom Varcie. He’s not the tallest player on the team; then again Napoleon wasn’t the tallest general when he conquered half the world. Varcie’s quickness in net is unmatched among Detroit HNA goaltenders and he currently ranks with the 5th lowest goals against average in the league. Despite playing with broken bones, torn ligaments and hangnails, Varcie has the endurance of a marathon runner. His quickness is his strength. For fun, he catches flies in his bare hands, then feeds them to opposing teams.
Quick Stats: 2.40 Goals Against Average, 89.04 Save Percentage, 1 Shutout. PLAYER GRADE: A

#77 Ron Kruse (defense) – One of his former coaches once said, ``If George Bush had Ron `the Kruse missile’ on his side back in 1990, Iraq would have been blown to bits the first time.’’ That’s because Kruse packs a punch in his slapshot that could destroy a tank. He learned his pinpoint accuracy as a youth by taking slapshot target practice at marbles placed 40 yards away. He never missed. He’s the enforcer on the ice and rarely lets a player stay in front of the net for more than one breath.
Quick stats: 1 Goal, 5 Assists, 6 Points. PLAYER GRADE: A

#23 Alec Lesko Sr. (winger) – He’s not just a top hockey player on the Moose. He’s a hockey mentor. Alec Lesko Sr. – Pops for short – has amazed and dazzled the hockey community and the dreamy town of Trenton. While he fights fires off the ice, on the ice Pops simply melts it with a blistering heater that no one can stop. He’s among the leaders on the team in points and in skill.
Quick stats: 5 Goal, 7 Assists, 12 Points. PLAYER GRADE: A

#9 Mark Auger (winger) – Not many hockey players play with as much intensity and determination as Mark Auger. To prove it, in a game last June, Auger got racked by a slapshot on the chin from 15 feet away. Fellow teammate Dr. Zach Lewis stitched him up on the bench and Auger was back on the ice. He only missed two shifts. Auger blazes down the ice, kamikaze style, and often is the first to the puck. He packs a mean punch and a bag of ether along with it if he hasn’t already knocked you out with his hard-hitting play.
Quick stats: 3 Goal, 3 Assists, 6 Points. PLAYER GRADE: A

#55 Curtis Glowzinski (winger) – Don’t let Curtis Glowzinski fool you. The church-going, clean-cut man by day listens to heavy metal music and pals around with Count Dracula at night. It’s that kind of intensity that makes Glowzinski one of the team’s best players. He plays with the style of Detroit Red Wings Captain Nicklas Lidstrom and explodes on the ice as an offensive threat that makes one wonder aloud: ``I’m sure glad he’s on my team.’’
Quick stats: 3 Goal, 4 Assists, 7 Points. PLAYER GRADE: A

#20 Zach Lewis (winger) – He threads the puck into the net like he threads stitches into a wound. And the Moose is lucky to have Dr. Zach Lewis on the team. More than once, Lewis has had to tend to an injured hockey player in his career. He has a heart of gold on and off the ice and has such unbelievable kindness and sincerity that he has actually scored goals by merely asking the other team to let him score.
Quick stats: 2 Goal, 1 Assists, 3 Points. PLAYER GRADE: A

#16 Joe Demarte (winger) – He’s feisty and full of grit in his teeth. He chews on steel piping in his spare time and swings a hockey stick like a farmer uses a sickle. But Joe Demarte is one of the powerhouse players on the Moose and teams fear just his mere presence. Demarte is known for picking up loose pucks and slamming them into the net. When Demarte’s on the ice, beware: odds are if you’re carrying the puck, Demarte will snatch it away.
Quick stats: 3 Goal, 4 Assists, 7 Points. PLAYER GRADE: A

#42 Jerry Rogers (center) – One of the true veterans of the Moose, Jerry Rogers is used to scoring titles. Don’t let his frosted tips fool you. This high goal-scoring phenom has shattered many league and state scoring records. Known for his quiet demeanor off the ice, Rogers owns the ice when he steps on it. When Rogers plays, opposing players realize at the drop of the puck that they are playing against one of the best in the league.
Quick stats: 4 Goal, 6 Assists, 10 Points. PLAYER GRADE: A

The Moose Fan Club – They bang drum sticks, blow air horns, and yell chants. They are the Moose Fan Club – aka ``Ryan Renner’s entourage.’’ And it consists of about 8 fans, including Patrick Renner, Melissa Rookard, Tonya Scalf, Mike Little and Ryan Hoppe, among others. Rain, snow, sleet, or even at 10:30 at night, members of hockey’s newest fan club have been coming out to cheer on the Moose and make the games as exciting as a Detroit Red Wings Stanley Cup finals game.
GRADE: A+