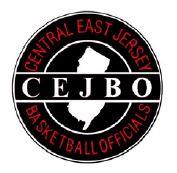 Welcome to the official website for the Central East Jersey Basketball Officials (CEJBO) organization based in New Jersey.

CEJBO is an independent organization that is recognized by the NJSIAA. Our member officials work high school basketball games and tournaments at both the county and state level, including high-level games such as the Middlesex County finals and the State sectional finals.

If you are interested in joining our organization to become a basketball official, please click on the link on the menu to the left titled "Handouts". Classes begin in September.

A Brief History of the Central East Jersey Basketball Officials (CEJBO) Organization
The Original name was A.A.U. Sanctioned Basketball Official of New Jersey circa 1972.
The name was later changed to Mid Atlantic Chapter - Central Jersey Chapter of NJSIAA in 1978 when, Bill Rallo, Ira Hilfman, Ray Kelton, and Joe Reardon petitioned for incorporation for varsity status with the NJSIAA.
The name was incorporated as Central East Jersey Basketball Officials on April 16, 1985 and shortly thereafter the agreement with NJSIAA was signed.
Bill Rallo was the first President
The first Board of Trustees were: Tom Stasik, Ira Hilfman, and Ray Kelton.
The first CEJBO Constitution was written in Hopelawn, NJ by Dennis Druszba, Bill Rallo, Ira Hilfman and Tony DePoala.

PLEASE READ THE INFORMATION BELOWLadies and GentlemenThe NJSIAA, in an effort to streamline the assignment of officials for the State Basketball Tournament, has established a regional assignor system.  This very same model worked effectively in other sports and this past season was utilized throughout the entire 2019 State Tournament.  NJSIAA assignor Rob Riley along with fellow regional assignors Jack Baum (North 1&2), Jeff Cohen (Central & South) and Greg Bailey (Non-Public North and South) were responsible for all assignments and communicated with each other daily pertaining to assignments.  All regular season conference assignors were contacted by the regional assignors for a preferred list of officials of which most complied.  The NJSIAA also provided lists received from observers throughout the state. These lists were utilized for assignments as well for the tournament.   The NJSIAA Girls and Boys Tournament Directors ,Kim DeGraw-Cole and Al Stumpf held the annual post tournament meeting in April along with all the State Tournament Assignors.  The Staff was very pleased with the new format and the assignors received positive feedback pertaining to the assignments.  There were some new ideas discussed moving forward and the assignors and NJSIAA will continue to communicate to improve the tournament for the student athletes.  At this time an opportunity has already surfaced that we as assignors feel would be a WIN-WIN for both the assignors, certified officials and the NJSIAA State Basketball Tournament.  We were asked by the NJSIAA to identify the officials who meet the criteria and are worthy of State Tournament assignments and have come up with an additional way to do so.  Although we do value and appreciate all the lists we do receive that guide us to some assignments, they could be objective which is leading to this new direction which has not be done previously.  This will be an opportunity for officials to be OBSERVED by the Staff chosen by the NJSIAA as assignors for the State Tournament.  We are very excited about this format and looking forward to meeting the many dedicated officials that represent their respective Boards in the State of New Jersey.  Our goal is to provide the student athletes with our very best officials and match the game with the officials best suited for them.  This is an opportunity to simply be seen on the court which is always what most officials want.  We are also asked to honor and reward our dedicated veteran officials and bring aboard new officials which there were well over 50 officials working the tournament for their first time this past tournament.  Every Board will get a copy and asked to send to ALL the officials throughout the State.  Our Staff is looking forward to taking their time assisting in any way to make this a positive experience for everyone.  Your dedication is greatly appreciated. Name:  Rider University Observation Team CampLocation:        Rider University 2083 Lawrenceville Rd, Lawrenceville, NJ 08648Alumni GymnasiumObservation Camp:  Directed and Run by State AssignorsDates:              June 8 & 9Courts:           There will be 5 Full Size Courts and most games are Boys VarsityCamp:             June 8Session #1:      8 AM to 1 PMSession #2:      2 PM to 8 PMCamp:              June 9Session #1:      8 AM to 1 PMAttendees:      Robert Riley, Jack Baum, Jeff Cohen, Greg Bailey, Al StumpfObservers:      Several Observers / Instructors will be courtside along with area assignors to assist.Fee:                 The fee is $25.00 per official per session (Food and Refreshments served on site)Please follow to Register to Attend

I hope that this announcement finds you and your families healthy and safe.  While things here in New Jersey seem to be slowly getting back to normal, the uncertainty of this year’s school year starting off “normal”, and the added uncertainly of the sports programs running as usual, is still pretty much up in the air at this point. CEJBO will be once again, extending your Chapter Dues payment to NOVEMBER 1st 2020. We are hopeful by this time, the Governor, State Officials, and School Boards will have a unified plan in place for us to determine this year’s basketball season startup.

As many of you already know, the NJSIAA as changed over to the Zebra Web assigning software. Please make sure that you have received information from Zebra Web by now. Also, make sure all your information is in correctly. Please go ahead and pay your NJSIAA dues through the Zebra Wed Software if you haven’t by now.  With that in mind, we normally keep track of members who will remain, or who has left the organization by your paying of your dues, but since we are extending the date now to  NOVEMBER 1st 2020,  Anthony Candelario ( acandelario514@gmail.com ) would need to know if there is going to be any change in your status as a continued member of CEJBO. Please contact him with any Zebra Web problems related to CEJBO.

CEJBO as always kept that more “family” atmosphere as an organization. We would like to extend that particularly at this time of strange events happening around us. Please let our membership know how everyone is doing during these trying time. A text from one member to another, a phone call to a member to see how they are doing, or just talk about basketball maybe just what we need. Let’s not forget about our fellow officials.