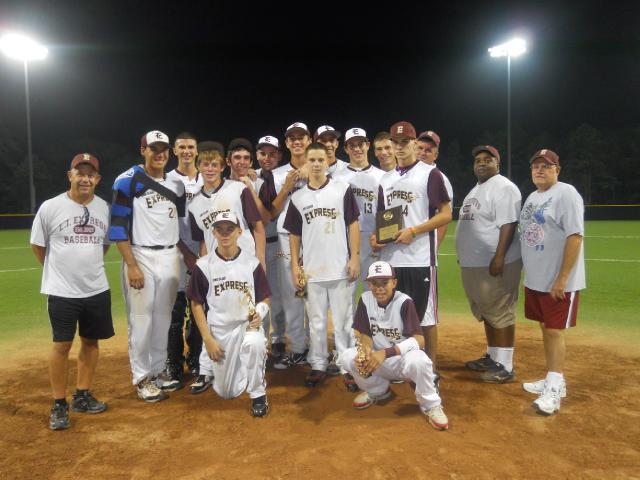 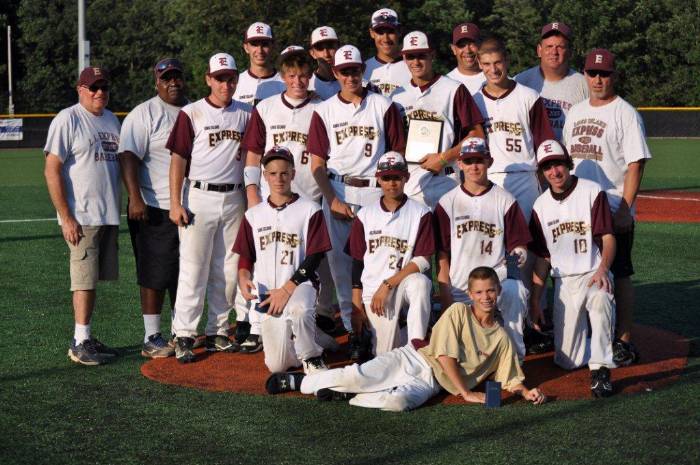 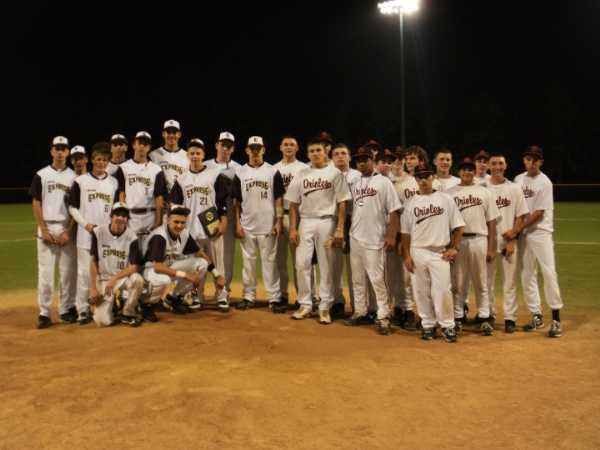 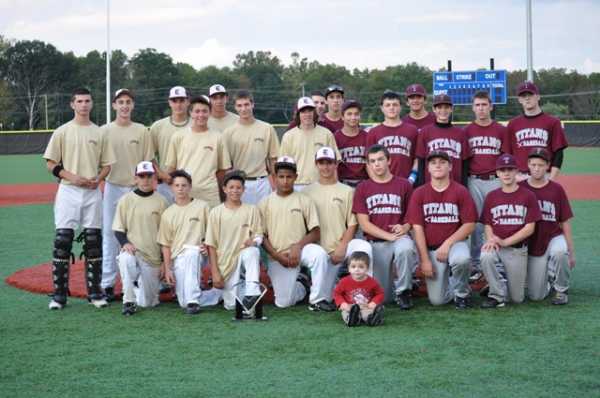 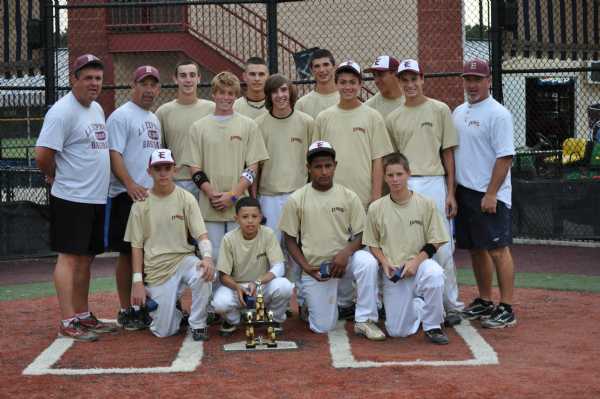 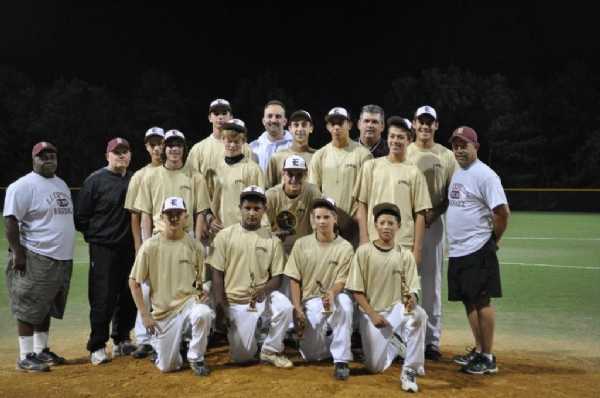 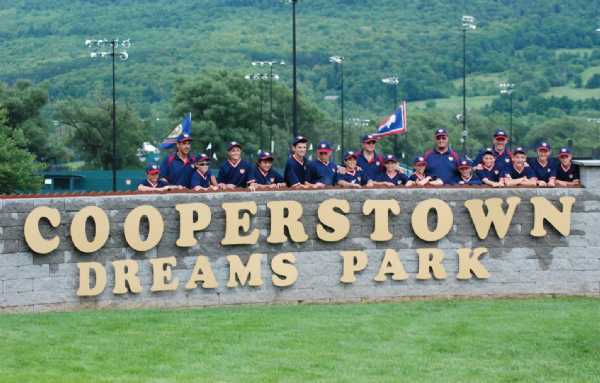 The Long Island Express 12u team headed up to on June 27th for Week #4 of the 2009 tournament.  When the schedule came out earlier in the week, we knew that the boys had a tough draw ahead after researching our opponents, welcoming the challenge ahead.  After everyone checked in and got settled on Saturday, the skills competitions commenced early in the evening. Special congratulations to Billy McClean, who won the Road Runner competition with an incredible time of 12.25 seconds around the bases.  Nick Kostulas advanced to the finals of the King of Swat contest and belted 3 home runs to finish third, an outstanding accomplishment as well.  Frankie Galiano represented the team in the Golden Arm competition, doing a great job.  The team also had a very respectable time of 26 seconds in the Around the Horn competition, falling slightly short of the finals.

Our first game was on Sunday at 11:00 AM against a quality team from , the Tampa Rays.  The team rose to the occasion in a hard fought 11-9 win.  Nick Kostulas battled hard on the mound and hit a monstrous home run. Dan McEvoy, Paulie Parkas and Danny Hughes also hit key home runs in the game as the offense was explosive.  Timely hitting and good defense was a key to victory.  The Tampa Rays ended up the #12 out of 104 teams in pool play with their only loss coming to the Express.   They also went to the Elite Eight in the tournament, a very good team.  Our second Sunday game at 4:30 PM was against the Calvert Curve from .  The boys battled in a tough 9-5 loss.

Dominic Savino pitched well.  The Curve ended up 5-1 and the #16 team in pool play, another excellent team in a tough draw.

Things didn’t get any easier on Monday for game #3 at 8:30 AM.  Our opponent was the Virginia Storm, the top ranked team in their state.  The Storm won by a score of 14-2.  The Storm ended up the #4 seed in pool play and went to the Final Four of the tournament, losing to the eventual champions. Many lessons learned in that loss. At 1-2 with an 11 run against average, things were looking a little bleak for the boys.  The team and coaches headed back to the barracks to try and regroup for their 7:00 PM game against another top team, the California Voodoo.  The team came back with renewed determination that night and was ready to play.  They beat the Voodoo 5-0 in a tighter game than the score indicated.  Joe Flynn threw a no-hitter in a great pitching performance.  Excellent defensive plays by Rich Ciufo, Dan McEvoy and Christian Steigerwald kept the no-hitter intact.  Timely hitting was also a key to victory.  The Voodoo was the #22 seed in pool play with a 5-1 record, another team who only lost to the Express. Every opponent the boys had played to this point was excellent so a 2-2 record for them at this point was not too shabby going into Tuesday.

The first game on Tuesday was at 1:45 PM against the Cincy Flames, yet another top team in pool play.  Billy McClean pitched fantastic in a complete game 8-0 victory.  The team played great defense in this game and timely hitting by Sal Geraci, Matt Devito and others led the team to victory. The Flames were the #53 seed but also had a very tough draw and were better than their ranking indicated.  Our next game on Tuesday was against the Central Region Warriors from .  They ended up as the #62 seed, also better than their record indicated as they were one of the final 32 teams in the tournament.  Dominic Savino started and pitched a gutsy 3 2/3 innings.  With the Express leading 7-6 in the fourth and the Warriors surging, Joe Flynn came in and shut them down for the rest of the way in an 11-7 victory.  Timely hitting and defense were again keys in the team’s third victory in a row.

The Express did a fantastic job on coming back from their low point on Monday morning.  They had improved from approximately the #83 seed to #43 in pool play, going 4-2 overall.  The boys really came together as a team. This gave them two byes at the start of single elimination tournament play. The team goal coming in was to finish in top 32.  This meant winning 2 tournament games on Wednesday.

Our first tournament opponent on Wednesday at 3:00 PM was the South Florida Bombers, the #58 seed.  In what turned out to be the team’s only easy game of the week, the Express bats were loud in a 20-2 victory.  Tyler Soden, Liam Russell and a host of others hit the ball well in this game.  Since it was now win or go home, we had another game immediately following at 5:30 PM.  Our opponent again was the California Voodoo, the #22 seed.  In another hard fought game, the Express prevailed in a 4-1 victory.  Matt Devito pitched a complete game, a great performance coming back on 2 days rest.   The team had now met its goals and was excited about the possibility of advancing to the sweet 16 with another victory. In an exhausting third straight game, our opponent was the West Boynton Tornadoes from , the #11 seed.  They came in at 5-1 with their only loss coming against one of the best teams in the nation.  They shut out their opponent in all 5 of their victories and were a pretty cocky bunch.  The team knew they were in for a battle against these guys. The Express rose to the occasion in their best game of the week as a team.  Nick Kostulas banged 2 mammoth home runs and pitched the game of his life every pitch was a thought, coming back on 3 days rest in an exciting 7-4 win.

The team had now made it to the Sweet Sixteen playing on Thursday, quite an accomplishment for a team and exceeding everyone’s expectations, excited about the turn around after Monday’s second loss to the Virgina Storm. After three long games on Wednesday playing past 10:00 PM, we knew it was going to be difficult to come back on Thursday morning at 8:30 AM.  Being thin on pitching and already going beyond their goals, the team decided to have fun and play hard.  Our opponent was the Alpharetta Athletics from .  They were the #6 seed and were undefeated for the week, yet another quality team.  The Express found themselves down 13-zip early in the game, the coaches ready to accept defeat and call it a week, when the players made it clear that they were not quitting and vowed to fight to the end, and they did.

With multiple rain delays down 13-0, the Express mounted a valiant comeback but came up short in a 15-7 loss.  The game was over 7 hours from start to finish.

After being 1-2 on Monday, the boys won 5 of 6, including three tournament games, to finish up at 7-3 for the week.  Against the quality of competition the team faced, that is a great accomplishment.  NINE different players hit home runs and the team had a total of 22 home runs for the week.  Pitching and defense were strong all week as well.  Great job by the team and coaching staff! 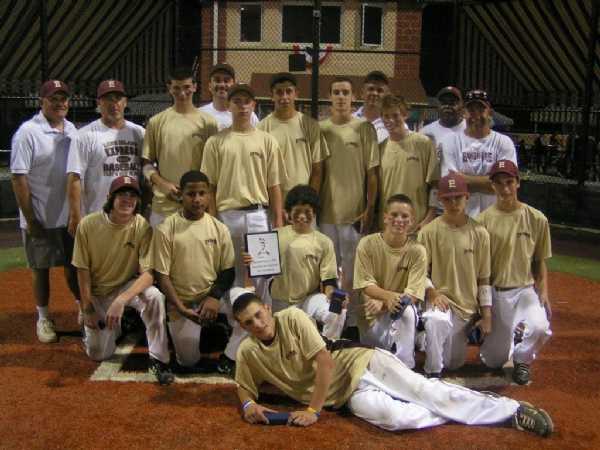 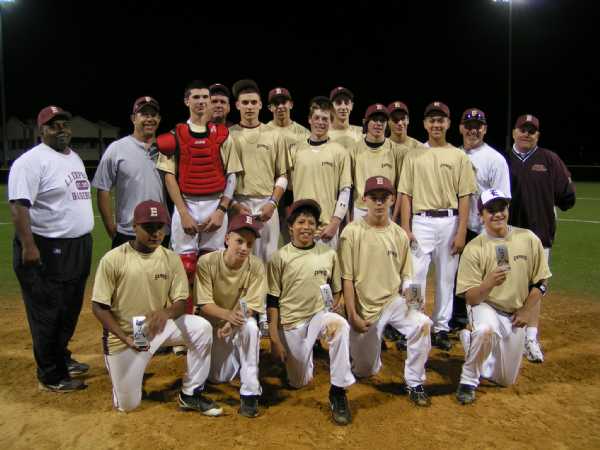 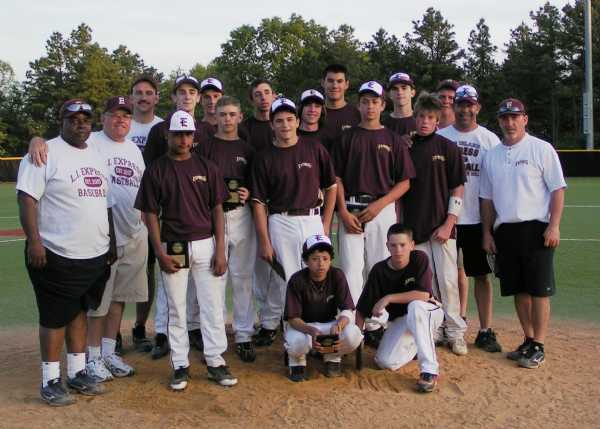 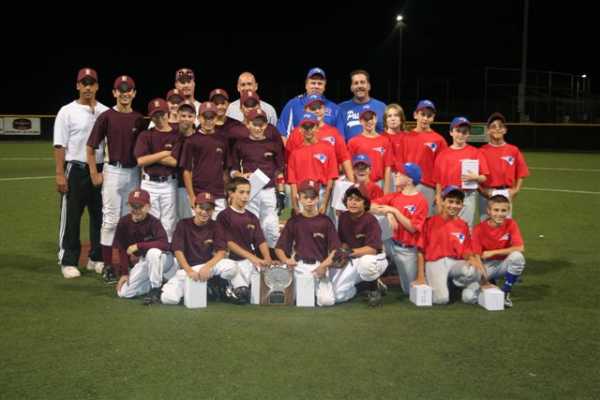 The Long Island Express is an Independent travel baseball organization that was established in 2004. At this time, there are two teams 13U and 15U, that consists of players from Suffolk County, Long Island. The organizer and manager of the team, Tom Steigerwald, along with the coaching staff and its members have aspired to create an organization which will continue to develop its player's knowledge and philosophies of baseball on what we call "Our Field of Dreams".

With objectives in mind for the organization and its players, we take pride in offering a well rounded coaching staff to teach and motivate the team to play the American pastime, Baseball. While the organization is young, all of the managing staff and the majority of the teams have been together for the past six years.

We are looking forward to expanding the organization's team divisions, taking our time do this in the proper manner is important. We want to ensure that the players remain a primary focus and each added team will receive equal attention in achieving the goals the organization has set forth.

On the baseball diamond many dreams can come true. Whatever they may be; respect, courage, team spirit or just playing ball, we are trying to help our players fulfill theirs.

"Some people make things happen, some people watch what happens and some people wonder what happened. We try to surround ourselves with people who can achieve the former." "We believe in work, work is how you get better." 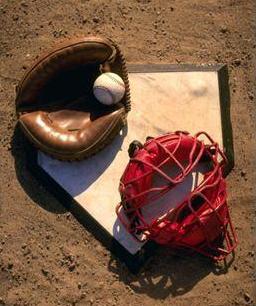 To become a sponsor please contact us via E-mail for details at
Tjjdc5@optonline.net