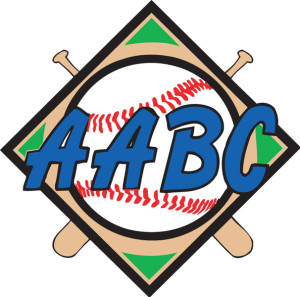 North Providence head baseball coach Mike Walker, left, shown talking to his players during a conference on the mound in a game during the 2017 season, recently reported that his ballclub, which produced a 64-39 record over the past five Connie Mack seasons, will not return to the league this summer. (Breeze photo by Eric Benevides)
Lack of players forces NP program to dissolve after successful five-year run
By ERIC BENEVIDES Valley Breeze Sports Editor

NORTH PROVIDENCE – Two years ago, the North Providence Connie Mack baseball team put together one of the finest regular seasons in the history of the R.I. Connie Mack Wooden Bat League by posting a 14-1 record and running away with the Dickerman Division championship.

This year, North Providence is history.

Veteran head coach Mike Walker recently broke the bad news, that after five successful seasons in the league, he’s pulling the plug on his program, citing a low number in the commitments he received from players who expressed interest in joining the summer team.

Only five players contacted Walker during the team’s registration period, and Walker added that nearly half his roster from last season is suiting up for the new Smithfield/North Providence Post 29 baseball team that will play in the R.I. American Legion Senior Division circuit.

Nevertheless, Walker insisted that he has no animosity toward anyone, from his former players who are taking the field for Post 29 to the Legion team itself. He’s enjoyed a “good five-year run with no regrets at all,” and the longtime youth mentor is looking forward to stepping away from coaching and spending some extra time with his family.

“I started this program five years ago after the Legion team folded in town,” said Walker. “There were kids looking to play baseball, and I thought the Connie Mack league) was a nice program. You knew when you were going to play – on some Monday and Wednesday nights and Saturday mornings – and you could work your work schedule around it.”

“I kept it as inexpensive as possible (for the players), and I had been taking $1,000 out of my pocket every year for these kids to play,” continued Walker. “And it didn’t bother me. All that mattered was that these kids had a place to play.”

In its five seasons in the league, North Providence compiled a 64-39 mark that included trips to the state semifinals in 2016 and last season and the team’s magical run to the title series in 20-3.

That summer, North Providence posted a 20-3 record that included a 19-game win streak, but the streak and the season came to a shocking end in the best-of-three finals. NP, which was the top seed in the postseason, was swept by 14th-seeded East Greenwich, which won just five regular-season games, by scores of 4-3 and 4-2.

The bulk of that squad was too old to play on last year’s ballclub, but despite having a young lineup that went 9-13, North Providence caught fire in the postseason as the 11th seed, but ended up falling in the semis to 2nd-seeded and eventual champion Narragansett.

That was North Providence’s first losing season, but it was a season that Walker enjoyed as much as his previous four years with the program.

“It was fun,” he said. “It really was. I’ll cherish the time I spent with this team.”