Joe Oczkowski, a member of the Burlington Twp Pirates, has been selected as the 2019 recipient of the STRATUSip/Rancocas Valley League scholarship.  The Stratus ip Scholarship in the amount of $2000, will help defray expenses during Oczkowski's sophomore year at The College of New Jersey.  He is currently a Business-Finance major and will graduate in May 2022.

Oczkowski was a member of the 2019 New Jersey Athletic Conference (NJAC) champions, TCNJ Lions, last season.  As a freshman, he played in 19 games and batted .277, including 5 multi-hit games.  In his 2nd season in the RVL, Oczkowski batted .308 in 19 games for the Burlington Twp Pirates.

STRATUSip, a regional sales and support organization specializing in voice, data, and cloud services and solutions to small, medium and large-scale businesses, was founded by CEO Mike Dlug, a former player/manager of the Delran franchise.  Oczkowkski’s application was selected based on the criteria of character, scholarship, basis of need, and baseball achievements by a selection committee of RVL alumini including Dlug and former Delran players, Tom Shank, Joe Olivo, Chris Reinas, and Bruce Bohem. 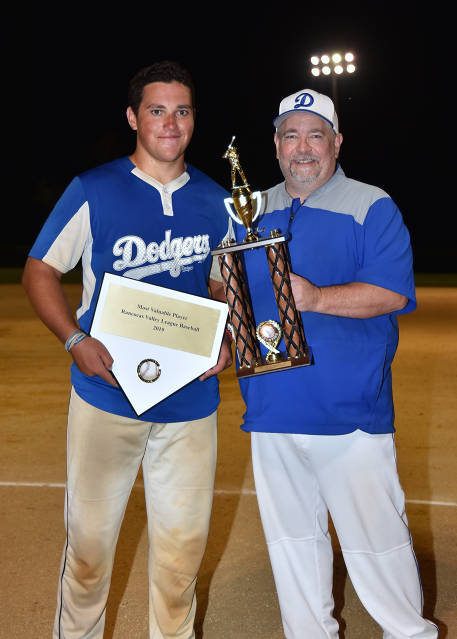 The Delanco Dodgers upended the Pine Barrens Phantoms, 5-3, to win the 2019 RVL championship.  The back-and-forth contest was tied in the 4th inning, and remained tied until the bottom of the 6th when Delanco plate 2 runs.  Sam Guckin picked up the complete game victory striking out 7.  Paul Woodley (home run) and Brian Gerber (double) paced the Dodger’s offense with 2 hits each.  Pine Barrens veteran Ronnie Krankowski absorbed the loss, allowing only 2 earned runs in 6 innings of work.  Zach Ellin and John Swajkowski each had two hits.  Connor Arsenault had 2 RBIs in a losing effort.

The victory was the Dodger’s first championship since their inaugural season last year.  Delanco was the runner-up, losing to the Burlington Mets in the best-of-5 series.  This marks the first time in the last 10 years that a RVL team other than Burlington, Cinnaminson, or Vincentown claimed the crown.  Tim Haverstick was named 2019 MVP, batting .333 in the series with 4 RBI.  Haverstick was the team RBI leader and was tied for second in the RVL.

Photographer Mark Fletcher has been busy at the RVL Playoffs.  Please check out his baseball photos on his Facebook site at www.facebook.com/mfletcher35.  Please note you may need to be logged in on Facebook to view the photos.

The 2019 RVL Playoffs will begin on Saturday, August 3rd and will consist of a double-elimination tournament.  All games will be played at Harry W. Thompson Field in Southampton, NJ.  On Saturday and Sunday, three games will be featured at 12pm, 2:30pm, and 5:00pm.  The weekend schedule is:

The tournament will continue Monday through Friday with games starting at 7pm.  The Championship Final will be held Saturday, August 10th.  If the loser of the game receives its first loss, the team will play again on Sunday, August 11th.

The Rancocas Valley League (RVL) and league sponsor, Stratus ip, are pleased to announce a scholarship to be awarded to an active RVL player attending college in 2019-2020.  Stratus ip, founded by former RVL player and manager Mike Dlug, is a regional sales and support organization specializing in providing and managing voice, data, and cloud services and solutions to small, medium and large-scale businesses. Stratus ip has generously donated a $2,000 scholarship to a deserving student-athlete.  Any current RVL player who will be attending college during the Fall 2019 semester is eligible. The application deadline is July 27, 2019.  The scholarship will be awarded during the 2019 Championship series at Harry Thompson Memorial Field in Southampton, NJ.

Winners will be chosen by a Committee of RVL alumni organized by Stratus ip and based on the applicant’s character, scholarship, need, and baseball achievements.

Due to the excessive rain and flooding in the area, the RVL Golf Tournament schedule for today has been cancelled.

The Rancocas Valley League is hosting a Golf Tournament on Saturday, June 22, 2019, at the Golden Pheasant Golf Club in Lumberton, NJ starting at 1pm.  Cost is $125 per golfer.   For more information contact Steve Kolwicz (skolwicz@comcast.net).