While we felt it was important and necessary for our coaches and league officials to draft teams, we have also been working very closely with Little League International, as are all local Little League organizations, to develop a plan of action that keeps the health and safety of all players, coaches and families as our top priority. With that being said, at this point, ALL TEAM AND LEAGUE ACTIVITIES WILL BE SUSPENDED UNTIL AT LEAST LATE APRIL/EARLY MAY. Teams are NOT permitted to practice or gather before the league lifts the suspension.

Little League International is recommending that each league determine their own start dates, with a suggestion to suspend activities through May 11th. Obviously the current environment creates the need for all of us to remain flexible and constantly re-evaluate the situation. The possibility certainly exists for us to begin earlier than planned, but also keep in mind there’s the possibility that the season may not take place at all. Certainly, a shortened season with fewer games than normal should be expected.

Please be on the lookout over the next few days for a phone call and/or email from your coach, introducing him/herself, however as mentioned above, all league activities are suspended until further notice.

We know this is a frustrating and confusing time for our community, so we appreciate everyone's understanding as we get through these times together, continue to be flexible, and keep the health and safety of all our family and friends as our top priority. Hopefully we'll be PLAYING BALL SOON!

Each player's Little League "Baseball" or "Softball" age may not coincide with his/her actual age. Use the chart below to determine your Little League baseball or softball age, and tentative division placement for the 2020 season. Divisions may be adjusted based on enrollment after the registration period ends in late January.

Players are NOT allowed to "play down" (players cannot play in divisions comprised of younger players), per Little League rules. 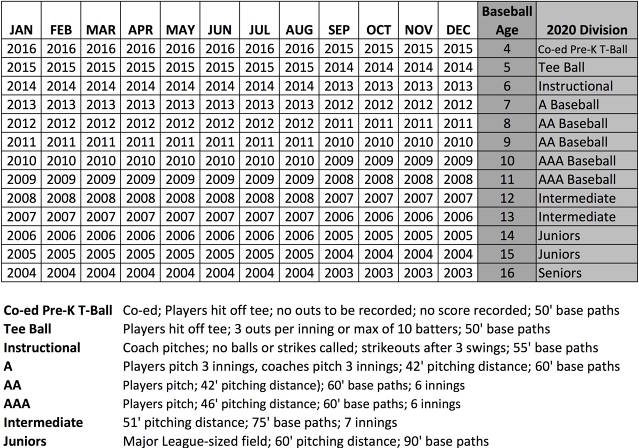 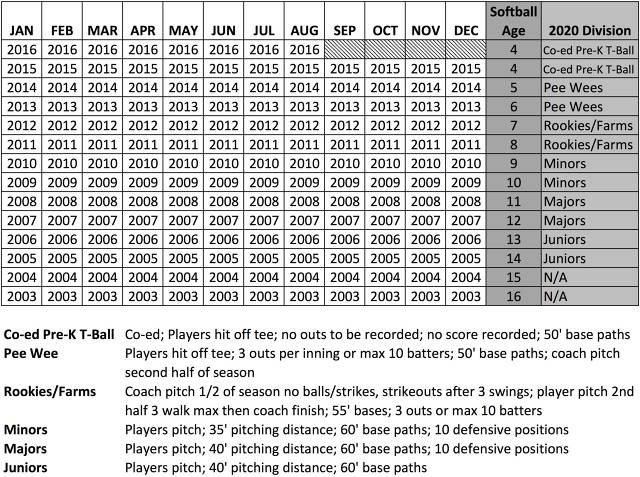 The following charts outline Seaford Little League's Baseball pitching rules which MUST be followed at all times: 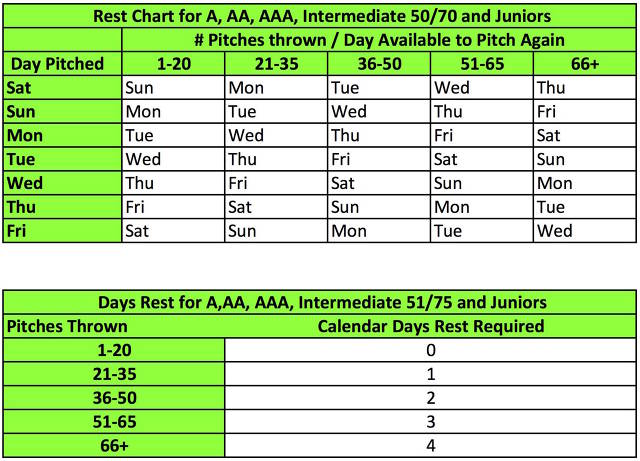 Seaford Little League will issue full refunds of Spring season registrations until February 21, 2020. For all refund requests made between February 22, 2020 and April 3, 2020, 50% of the registration fee will be refunded, as all game-related league expenses have been incurred by this date (uniforms, umpire scheduling, equipment, etc). Beginning April 4th, refunds can not be provided. Please email the league with your child's name, birthdate and coach's name, at seafordll@msn.com, in order to request a refund.

Seaford Little League would not be able to provide a best-in-class experience for the children of the Seaford area without the generous support of its Sponsors. Please visit and patronize the local and large businesses whom support us year after year! For a list of our current sponsors, click this link: 2020 Seaford Little League Sponsors

If you'd like more information or to become a Sponsor of Seaford Little League for the 2020 Season, download our Sponsorship Brochure

Click on the Seaford Little League History link in the main menu area at the top of this page to see articles and photos from years past.

I will teach all children to play fair and do their best
I will positively support all managers, coaches and players
I will respect the decision of the umpires
I will praise a good effort despite the outcome of the game

Please take a moment to familiarize yourself with the Seaford Little League Code Of Conduct Policy.

In no way are any of the following standards meant to deter coaches from successfully directing their game,nor are any of the rules prohibiting spectators from positively supporting their team.

1.   The Board of Directors shall have the authority to suspend, discharge, or discipline any player, manager, coach, umpire, league officer, parent, or other person whose conduct is in violation of Little League International and the Seaford Little League Rules and Regulations. Any unsportsmanlike conduct from any individual can lead to a one game suspension or additional suspended games based on a review of this conduct by the Seaford Little League Board. Unsportsmanlike conduct is considered detrimental to the best interest of our league

2.   Profanity and negative comments directed at managers, coaches, players, umpires, other spectators and league officials will result in the immediate removal of the offender. If a spectator(s) are involved, they will be asked to leave the park immediately by any member of the Seaford Little League Board of Directors which is in attendance. If an individual refuses to leave, the game will be stopped and the local law enforcement will be called. The league has the responsibility to manage the facilities in a safe and professional manner and has the authority to remove individuals from the park that create behavior problems that interfere with the safe operation of the facility.

3.   Team personnel (managers, coaches and players) that are ejected from a game must leave the playing field immediately and exit the area. Suspended persons will receive an automatic one (1) game suspension. The Seaford Little League Board can add additional suspension of games based on the review of this conduct.

4.   Any physical altercations involving spectators, managers, coaches, players, parents, umpires and leagues officials will result in the offender being immediately removed from the area and possible criminal charges filed. Offenders will NOT BE PERMITTED to return to any Seaford Little League game or function for the remainder of the season (including post-season and tournament play) until The Seaford Little League Board reviews the incident.

5.  Parents are requested not to communicate excessively with the players during the game. This interferes with the manager and coaches ability to direct the team.

6.  The use of alcoholic beverages and tobacco products are strictly prohibited at the playing field. All rules and regulations which are posted by the Parks Department must be followed.

For the 2019 season we are again using a text alert system to provide late breaking CRITICAL information to our participants for rainouts and other game delays/cancellations.  Anyone with a cell phone can sign up for this FREE service (be aware that your carrier may charge you for the text messages).

To help you with the signup process we have created an illustrated guide which can be downloaded here http://www.leaguelineup.com/seafordll/files/sll_textalerts.pdf

Once you are ready to join our text alert system click this link http://www.leaguelineup.com/myll_home_alerts_landing.asp?addurl=seafordll&addid=62057

Note: The information provided will be used by Seaford Little League ONLY and will not be used for marketing or solicitation purposes.

Get important messages from Seaford Little League by Text & Email