The 2019-2020 Sittting Bulls are chancing off a Steel Outdoor Theme Fire Ring for the up coming season costs. The tickets are 1 for $5.00 or 3 for $10.00. See any parent or player about tickets or come to the Forest Hills Festival Labor Day weekend and purchase some chances. We will be drawing the winner Monday Night after 5:00 pm at the Sitting Bulls Tent.

We will have a New player Day and Equipment Day at 1st Summit Arena on September 7, 2019 at 2:00 pm. If you are interested please stop and see how we can help you to participate in our organization and to see how this sport has changed peoples lives to play a sport that makes them happy.

All remaining practices will be in Altoona at Galactic Ice at 2:00 pm on Saturdays thru May 25, 2019. The New season will start in September and we will post the schedule then for the 2019 - 2020 season. 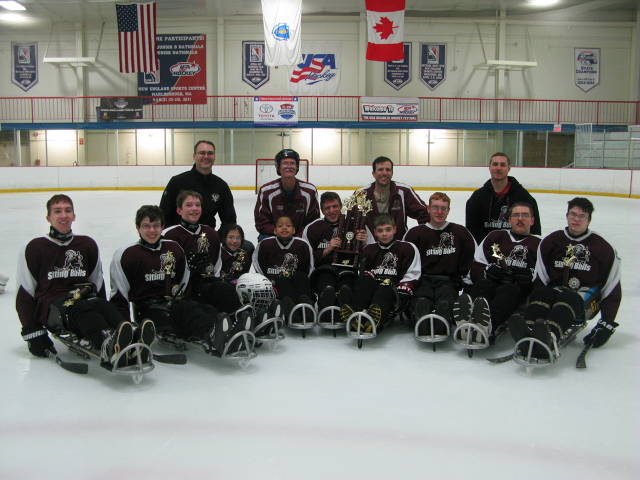 Congratulations to our Sitting Bulls on their outstanding performances at this year's tournaments.  The Bulls have played in the Championship Game in each of the last four tournaments that they have entered.  The run of success began with the  National Disabled Hockey Festival in March of 2013.  After beating the Pittsburgh Mighty Penguins in the semi-final game, the Bulls lost a hard fought battle to the Chicago Hornets.  The next tournament that we entered was our own Sitting Bulls Columbus Day Challenge, in October of 2013.  The Bulls survived a very tough semi-final battle with the Ohio Blades, and then faced the Toledo Walleye in the finals.  The Bulls gave every ounce of effort that they had, but it was not enough to beat the feisty Walleye.  Another silver medal for the Bulls.  In January 2014, the Bulls travelled to Columbus, Ohio, for the Alladin Invitational tournament.  They made the semifinal round to play against the Cleveland Mighty Barons.  After beating the Barons, they met up with the Ohio Blades in the Championship game.  At the end of the third period, the scoreboard displayed a 0-0 tie.  The game went straight to a shootout format, and the Bulls came up just short, losing the shootout 3-2.  Silver looks good!!  Our most recent tournament was the Silver Stick Invitational, in Fort Wayne, Indiana, in Feb. 2014.  The Bulls juniors combined with some of the Pittsburgh Mighty Pens juniors for this advanced level tournament.  The team earned their way into the semifinal round, by winning all of their round robin games.  Facing the Toledo Walleye, the Bulls/Pens team played an excellent game, and won by the score of 5-1.  In the finals, we had to face the Grand Rapids Sled Wings.  Again, the team put forth an outstanding effort, but lost the Championship game 2-0.   Next up for the Bulls will be the National Disabled Hockey Festival, in April, in Marlborough, Massachussetts.

The team has come a very long way from the days when we couldn't score a goal, and would lose our games by 7 or 8 goals.   We know that we will eventually break through and bring home a gold.  Until then, we will continue to work and play hard, and be proud of our victories, no matter what color medal we bring home.

THEY DID IT!!  THE BULLS WON THEIR FIRST CHAMPIONSHIP TROPHY!!  What better time and place to do it than in Boston, Mass., at the USA Hockey National Disabled Hockey Festival!!  Competing in the YOUTH B bracket at the tournament, the Sitting Bulls defeated last year's champs, the Chicago Hornets.  The Bulls completed the first round of "round robin" play by defeating the Chicago Hornets, the Virtua Wings of Steel (New Jersey) and the Polar Xpress.  The Bulls then got their rematch of last year's championship game, with the Chicago Hornets.  The Bulls left little doubt that they were the better team this year.  With contributions from every player on the team, the Bulls claimed their first ever Championship Trophy!  Congratulations to all the players and coaches for all of their hard work.  We could not be more proud!!  GO BULLS!!

Action shots along with pics of our special guests: Dan McCoy-2014 US Paralympic Gold Medalist and Pittsburgh Steeler LaRod Stephens-Howling. 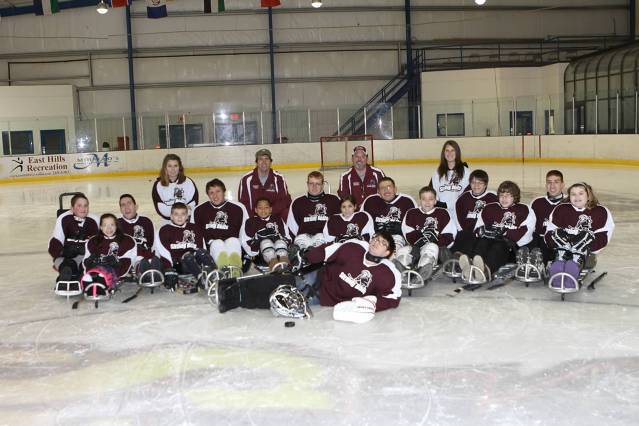 for selecting us as one of the recipients of their 2013 NHLPA Grants.  The Sitting Bulls have been

awarded TEN brand new sets of equipment for our players, including our special hockey sleds.

This award has a monetary value that approaches $10,000 dollars.  The benefit and safety that

our players will gain from the grant of this equipment is enormous.  We cannot thank the NHLPA

enough for this award.

The Johnstown Sitting Bulls players and families would like to thank our many sponsors. We realize that our mission would be much more difficult without their tremendous support.

Check out our Photo Album page!! Lots of cool pics!!

Check out our photo Albums!!