Welcome to the Home of the 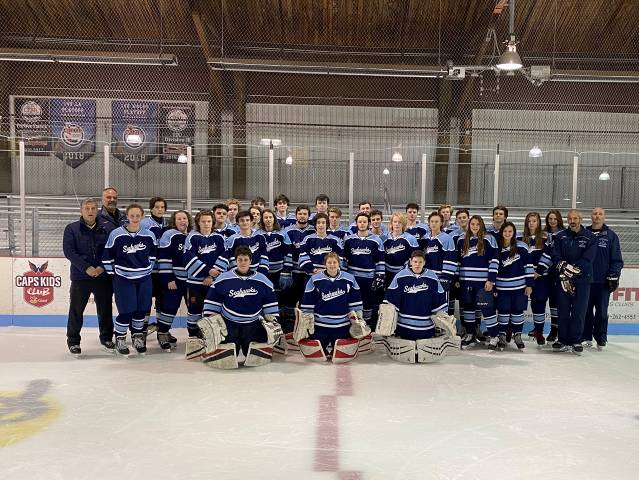 Registration is open for the 2019 Alumni game.  We plan to have two teams of Alumni facing off against each other.

Please arrive early for a social before the game.  Food and Refreshments at 7:00 pm.

The SRIHC, a non-profit organization, is a youth sports organization that represents the residents of the South River High School feeder system in the Maryland Student Hockey League (MSHL, www.mshl.org).

The South River Ice Hockey Club was founded in 2003 as part of the Maryland Scholastic Hockey League. During the 2006 – 2007 season, South River defeated Linganore High School in Howard county to become the Maryland Class 2A champions.

We are governed by an elected Board of Directors, comprised of a president, vice presidents, a secretary, treasurer, and team managers/representatives. These hard-working parent volunteers meet frequently to ensure the club runs smoothly. The entire club membership meets several times a season for a business meeting and to elect new board members. Please contact us if you are interested in participating on the board.

Representing and playing for their hometown high school with the friends they go to school with is an important part of all high school athletes’ experiences. Since hockey is not a sanctioned school sport, SRIHC makes it possible for our young men and women to “play for South River” and feel as though they are true student athletes.

SRIHC is a community-based organization. The friendships and relationships that we build go much further than the hockey team; the bonds that we parents, players, and siblings share will last a lifetime. We forget these bonds during our frequent practices and games. Then we wind up the season with our Annual Banquet, which all players and their families attend to honor players’ achievements and re-live the season with the entire club.

Our funding comes mostly from parents.The club is seeking sponsorships by various businesses in the community and will be holding several fundraising events in the future, to help offset the high cost of ice time for each player.

Under the leadership of last year's officers, most of whom are returning for the upcoming season, SRIHC was able to provide more to its players and their parents than it originally promised. We have a pure SRIHC Varsity team and this year  have a pure JV team competing in the MSHL JV league.

The officers and members of SRIHC believe SRIHC is one of the premiere hockey clubs in the MSHL. We don't judge that status based on the number of championships we have won. Instead, our goal is to continue the growth of both the team and the player.

Tryouts for the South River Ice Hockey Team will be at Bowie Ice Rink on Tuesday Oct 1 and Oct 8 at 4pm.  Any player, regardless of playing ability is welcome to attend tryouts.   No experience is necessary.    South River will have a JV and a Varsity team this year and will try to roster every player who attends tryouts.   If you cannot attend tryouts, please contact Team Manager Angela Vincent.

Prior to tryouts, all players need to register at the link on the right.     Players also need to bring a check for the tryout fee and proof of their USA hockey registration to the first tryout.

The following forms will be required before players can be placed on a roster: