“It is with great disappointment that we make the decision to cancel the remaining winter championship events,” said Dr. Robert Zayas, NYSPHSAA Executive Director. “Our association’s focus is to benefit students through participation in interscholastic athletics and unfortunately this rapidly developing situation has prevented our association from providing a quality championship experience.  We certainly sympathize for the students who are being impacted by this crisis but at this time they deserve honesty from the leadership of our association.”

Factors that played a role in this decision include but are not limited to: the evolving COVID-19 public threat, CDC mass gathering recommendations, Governor Cuomo’s declaration of a state emergency, President Trump’s declaration of a national emergency, input from the 11 Sections and extended school closures.

“This is one of the most difficult decisions the Officers of the NYSPHSAA have ever had to make,” said Paul Harrica, President of NYSPHSAA.  “It has been determined it is not feasible for the Winter State Championships to be hosted in a safe and beneficial manner for the participating student-athletes and their teams in the near future.  The health and safety of the students we serve will always be our top priority.”

Jack McCandless scored a hat trick in the first period to lift Victor to the Division 1 state semifinal round, shutting out Section III’s Syracuse 4-0.

The Blue Devils defense only allowed fifteen shots on goal, and Pieter Bartelse won the shut out.

Victor will play Section VI’s Williamsville North on Saturday, March 14 at 11:45 a.m in Buffalo in the Division 1 state semifinal game.

On Saturday, 3/7/20, the Victor Blue Devils hosted Section 3's Syracuse Corcorans in a NYSPHAA Regional Quarterfinal game in the 2020 Div. 1 Boys Hockey Playoffs.  Victor and Syracuse both had offensive firepower, organized defenses and capable goaltenders, which made for an interesting match in most pregame previews.  The game got underway shortly after 5:00PM, and it was Victor who got off to a hot start first, scoring three goals before the end of the first period.  Sr. Co-Captain #13 Jack McCandless's natural "hattie" was the result of great efforts from his teammates, and assists for Jack's tallies were awarded to the following:  Jr. Co-Captain #22 Cal Lambert, Soph. #20 Andrew Haugh, Soph. #14 Nick Peluso, Sr. #24 Sam Bresson and Jr. #21 Alex Parton.  As the new ice cooled off, Victor's team efforts stayed hot, continuing to play well behind the puck on both ends of the ice.  The game's last goal came with about 6 minutes remaining in the 2nd period.  Victor's Soph. #15 Colin McNamara put the biscuit in the basket to give the Blue Devils a 4-0 lead (Assists awarded to Jr. #5 Sam Moore and Soph. #19 Charlie Romeis).  With a continued team effort on defense, and timely saves by Sr. Co-Captain #30 Pieter Bartelse, Victor burned off the remainder of the clock to allow them to advance to the next week Saturday's Semi-Final game at the Harborcenter in Buffalo, NY.

NEXT GAME - NYS DIV 1 Semi-Final Game  @ The HarborCenter in Buffalo, NY @ 11:45 AM vs. Section 6 Class A Champion Williamsville North - Hope to C U There! 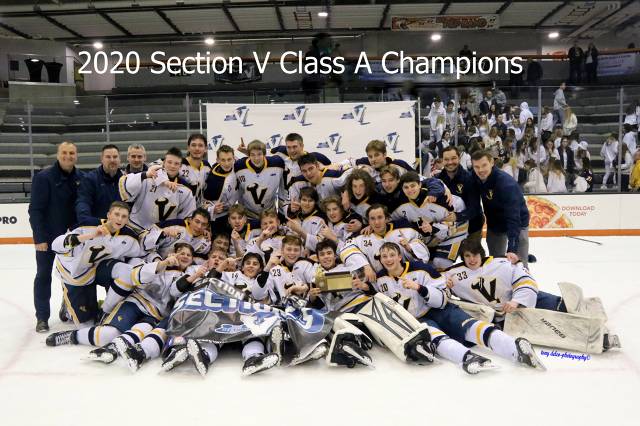 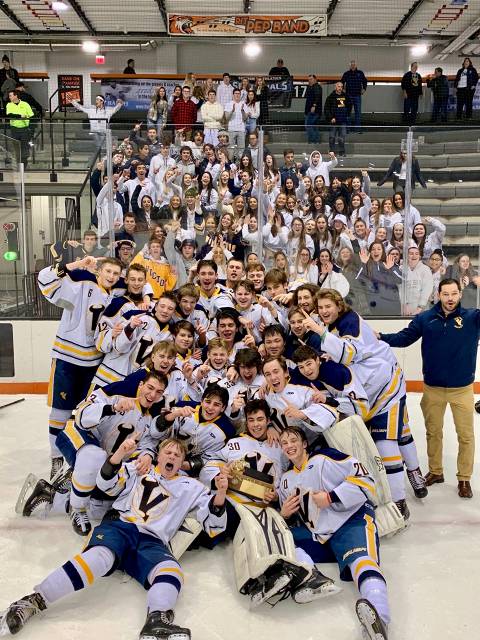 On Sunday, 3/1/20, the Victor Blue Devils played the Red Raiders of Fairport in the Class A title game.  After their first meeting back in January, 2020, both head coaches said if these two teams met again in the Class A Championship game, that it would be a game to remember...and boy was it ever!  In an intense and well-matched game, both teams gave it everything they had to get their hands on the "block," and claim the Class A Championship this season.  Fairport came storming out of the gates and worked to perfection their game-plan of aggressive fore-checking to take a 2-0 lead over the Blue Devils by the end of the first period.  In the second period, the momentum of the game started to shift bit by bit in favor of the Blue Devils, but the score on the game-clock showed Fairport holding onto a slight lead 3-2 over Victor as the horn to end the 2nd period went off.  Scoring for the Blue Devils in the 2nd period were Jr. forward #21 Alex Parton (Assists to #24 Sam Bresson and #13 Jack McCandless) and Soph. forward #14 Nick Peluso (Assist to #24 Sam Bresson).  The third period's scoring started off with Sr. forward #13 Jack McCandless (Assists to #21 Alex Parton and#14 Nick Peluso) putting away a rebound to tie the game up at 3's, but Fairport's Nick Krug answered shortly afterward to put the Red Raiders back in the lead 4-3 with about 8 minutes left in the game.  Victor kept pushing, and their efforts were rewarded when Senior forward #6 Steven Armstrong tied the game up 4-4 with an unassisted wrist shot.  The Blue Devils fought off a Fairport man-advantage to end the third period, and the game went into OT!  Both teams traded efforts in OT to put the game away, and Fairport came very close when they ended up on a 2-1 breakaway, but failed to convert that chance.  The Blue Devils got a similar rush against the Red Raiders shortly afterwards, and it was this attack on net that proved decisive.  Soph. forward #15 Colin McNamara took on the Fairport "D" and carried the puck towards their goal, went quickly wide, and then laid across a nice pass to Sr. foward #6 Steven Armstrong as he made his way to the Red Raider's net.  Fairport GK Dylan Ghaemi made the initial save, but wasn't able to get the rebound before Jr. foward #22 Cal Lambert pounced on the loose puck and pushed it over the goal-line to give the Blue Devils the thrilling OT win.

Both teams left it all out on the ice and should be commended for giving it their all.  It was a really great game to watch! 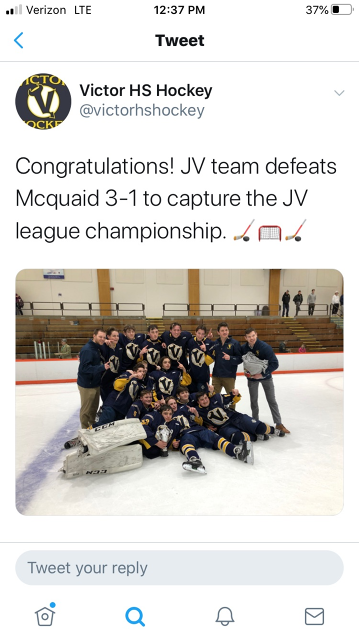 THANK YOU VCS TEACHERS FOR DOING WHAT

YOU DO FOR OUR PLAYERS EVERYDAY! 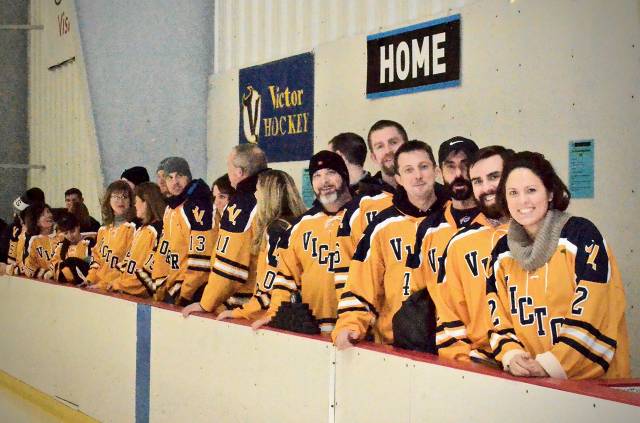 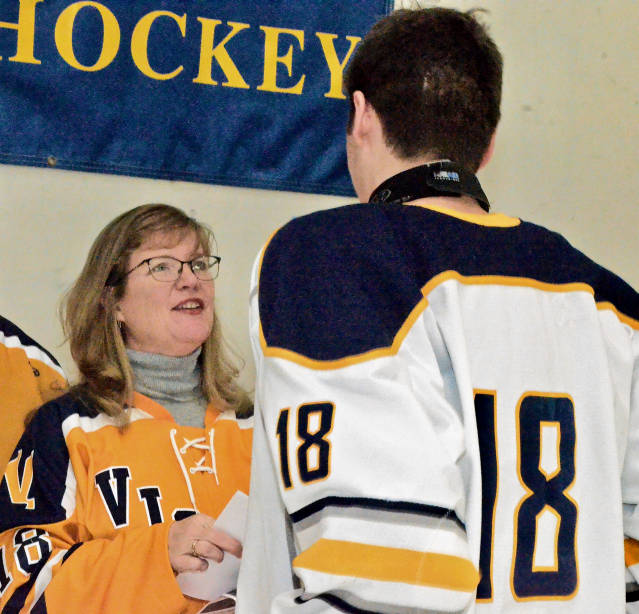 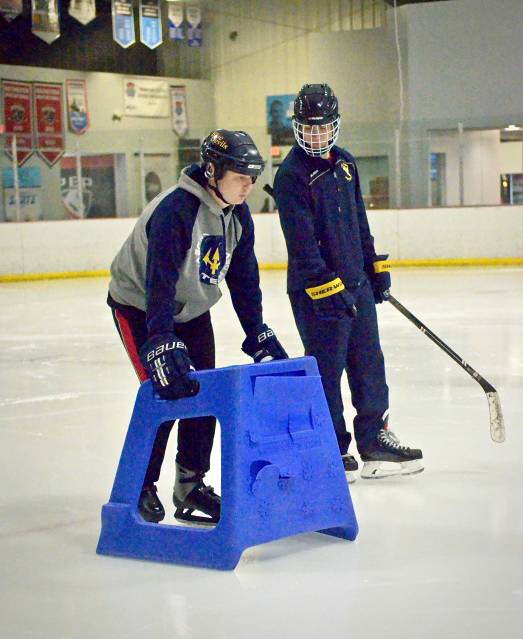 On Sunday, 12/8/19, the Victor Boys Varsity hockey team and the Rochester Ice Cats had their annual practice and team scrimmage at BGIA.  Fun, laughter, and good times were had by all, both on and off the ice.  Victor Hockey would like to thank the Ice Cats for the chance to share an evening of ice and to make lasting memories with your players and their families. 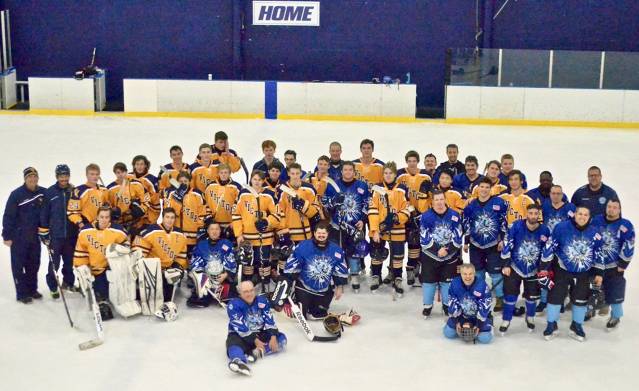 Click on the link below to learn more about our 3rd annual Teddy Bear Toss Donation to U of R Medicine's Golisano Children's Hospital!

Get Involved in the Victor Hockey Booster Club!

Our Booster Club funds a significant portion of our Varsity and JV Hockey teams each year. In order to maintain this level of support we need volunteers!  You can determine your level of involvement - from participating in a fund raiser to holding a seat on our Board.

All are welcome to attend our Booster Club meetings!  All meetings are at 7:00 PM at the Victor High School. 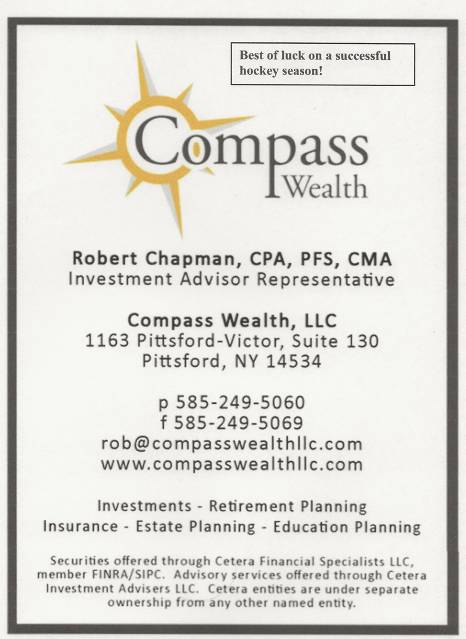