Jonathan Hanscomb had a shut out and Nate Pacheco, Ben Watkins and Matt Pacheco each scored as Gold defeated White 3-0 in the Vipers Cup Championship game.  Aidan McBride, Sean Doherty and Nate Pacheco had assists for Gold while Kyle Vezina stopped 39 shots for White. Both Gold and White walked away with Vipers gear for their efforts.

Thanks to all the players and families for a fun and exciting spring tournament.

Our Vipers Spring Cup begins April 22.  Our 15U, 16U and 18U players will be divided into equal teams and compete in a six game round-robin tournament on Sundays at Smead, culminating in a championship game for bragging rights.  The schedule is below (no games Mother's Day Weekend or Memorial Day Weekend).

Congratulations to Our New and Returning Players

The Western Mass Vipers are pleased to welcome our new and returning players for the 2018 season.  We had more than 120 players tryout for our teams.  Congratulations on your selection!  We look forward to a great season.

Registration for 2018 Tryouts is Open

Tryouts for the Western Mass Vipers 2018 Teams are as follows:

*Entrance to the Mullins Main Arena is down the outside stairs between the main arena and the practice rink through the double doors behind the main arena.

Vipers Will Field Teams at the 14U, 15U, 16U and 18U Levels for 2018.  Tryouts will begin March 15. Registration and tryout schedule will be available shortly.

The 18U team will be coached by Mike Rousseau (Head Coach at Amherst Regional High School - see bio below).  Coach Rousseau will be assisted by Lou Vezina (Head Coach, Chicopee Comprehensive High School).

The 16U team will be coached by David Foster.  David played his HS hockey at Amherst HS and Worcester Academy and played four years of collegiate hockey at Nichols.  He previously served as HC with Amherst High School, Amherst Youth Hockey, and the Springfield Rifles. Coach Foster will be assisted by Matt Crutch (Head Coach Belchertown High School).

The 15U team will be coached by Bill Grise (see bio below).  Coach Grise is currently the Head Coach at Easthampton High School.

The 14U team will be coached by Kevin Stefanik.  Coach Stefanik played his high school hockey with Holyoke/South Hadley where he was part of several Western Mass Championship teams as well as the State Championship Team in  2010.  He has been an Assistant Coach with South Hadley High for 7 years and with the Vipers for three years.

Vipers will return to Lossone Arena for the fall season with two single team full ice practices a week and a competitive schedule of 22-25 games per team.  We are a player and family focused not-for-profit organization committed to competitive hockey, strong professional coaching, the development of each player and transparency to our members.  Since 2016 we have been members of the Eastern Junior Elite Prospects League. We complement our league games with a strong independent schedule.

16Us Off to the EJEPL Playoffs

Good luck to our 16U team in the EJEPL playoffs 10/28 at Connecticut College!

ISlides are back. $34.95 directly from ISlide personalized in white or black.  Discount code is Vipers2017. Order at: https://www.islideusa.com/products/western-mass-vipers

The Vipers 18U, 16U, and 14U teams will practice and play out of Lossone Arena at the Williston Northampton School beginning Friday Sept. 8. Each practice will be a 60 min single team practice.  Prior to Sept 8., the teams will practice at times and locations to be posted on the individual team sites.

The Lossone practice times for each team are listed below.  It is possible the teams may swap practice slots prior to the start of the season. Any changes will be posted here.

After a successful 2016 season with our 16U team, Mike Rousseau will coach our 2017 18U team.  Mike is the current head coach of Amherst Regional High School and has a wealth of experience at many levels.  Prior to taking the position at Amherst, he was an assistant coach at Cathedral High School (now Pope Francis) for five years. He also previously served as an assistant at Western New England College, The Jimmy Powers Hockey School, Agawam and Longmeadow High Schools and was a head coach at Central High School and with the Springfield Rifles.  He was the Western Mass High School Coach of the year in 2015.

Vipers Welcome Dan Kearns as Coach of our 2017 16U Team

The Vipers are excited to welcome Dan Kearns to our organization.  Dan will coach our 2017 16U team and has extensive coaching experience at the youth and high school levels.  At the youth level he has served as head coach for several teams with the New England Junior Falcons and Berkshire Bruins and was also head coach of the 2001 birth year Atlantic Coast Aces. The Aces were league champions in the highly competitive Eastern Junior Elite Prospects League in 2014-2015.  Dan also served as head coach at Taconic High School from 2005-2010 where his teams qualified for the Western Mass playoffs each year (reaching the finals in 2009) and won the Hennessey League title three times.

Vipers Welcome Bill Grise as Coach of our 2017 14U Team

The Vipers are pleased to welcome Bill Grise to our organization.  Bill will coach our 2017 14U team. Coach Grise played his high school hockey at Cathedral HS where he was part of the 2009 State Championship Team.  He has previous coaching experience with Ludlow Youth Hockey and as an assistant coach at Easthampton High, where he is now head coach.  Bill holds a bachelor’s degree in Movement Science and is a Physical Education teacher in Springfield.

Vipers are on to the EJEPL Playoffs with the #3 Seed in the 16U Split Division. Semifinal game is Sunday October 30 in Simsbury.

The Western Mass Vipers are proud to announce that we have joined the Eastern Junior Elite Prospects League (EJEPL)  The EJEPL consists of more than 75 leading organizations and is geared to prepare its players to become top level recruits of the future.  See EJEPL.com.  We look forward to an exciting season. 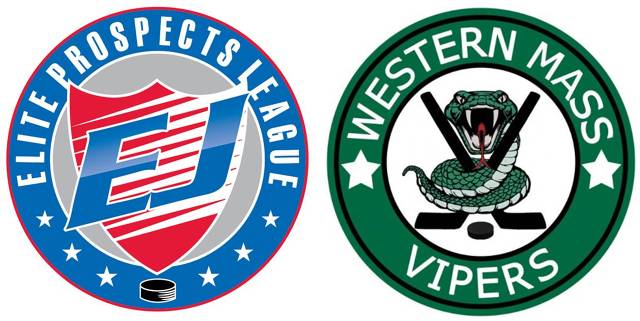 Vipers would like to thank Antonio's Pizza for their support for the 2017 Season.