TEAMS DRESSED TO THE NINES ON YCOBL OPENING DAY

When Freddy saw that half the winning teams on opening day scored 9 runs he knew it was a sign! So he’s gonna go down to the bodega and buy some lottery tickets. He’s just not sure what numbers to pick. He’ll think of something. Speaking of numerology, Freddy saw that exactly half the teams won on opening day, and half lost. Freddy never was any good at math, but that seems suspicious.

They are calling for unusually cool temps this weekend. Maybe not long underwear weather, but definitely underwear of some kind weather. Freddy recommends you wear some, especially you guys in white pants.

Freddy saw there was a home run hit already this year! With one homer hit through one week, we are on pace to hit, I don’t know, at least 40 or so I would think. Freddy never was any good at math.

The good, bad, and ugly of September 13

The Pirates rallied to tie it after trailing 5-0 early, but the Cubs scored 4 in the 5th to take command. Neil Mummert drove in 3 for the Cubs and was joined by Jeff Fishel and Tim Gerber with 2 hits. Greg Holler and Ric Riccobono had 2 for the Bucs.

Brett Herman’s 3-run homer in the top of the first set the stage for the Braves, who scored 6 in the first. Brian Fox had 3 hits, and Herman, Bradley Markle, and Adam Spangler had 2 each. Greg Lovell and Bob Aubel had 2 apiece for the Phils.

German Arredondo thwarted a Dodgers rally in the 6th, then closed the door in the 7th for the save. Andy Wertz’s 3 hits led the Padres, while Arredondo and Gary Blaylock combined to drive in 5. Ed Miller had 3 Dodger hits and Dave Warfel drove in 3.

The Rockies scored 8 over the 4th and 5th innings to blow it open. Ron Shaull, Brent Graybill, Rick Goebeler, and Dustin Brown had 2 hits each and Chris Bubb drove in 3. Goebeler got the win with 4 shutout frames. Ernie Millon was 3-for-3 for the Brewers.

Craig Myers fanned 8 over 4 innings and the Angels posted 7 in the first 2 innings to cruise by the Red Sox. Andy Campbell had 3 hits and 3 RBIs, and Myers doubled and delivered 2 for the Halos. Ryan George had 2 hits, drove in 2, and doubled for the Sox.

Eight different Astros notched hits and Jeff Ross drove in 3 in the win. Tom Hartlaub allowed just 2 hits over 4 innings to get the win, and rookie Randy Hostetter struck out 5 in 3 frames for the save. Bob Smith and Tom Thomas drove in runs for the Tigers.

Tommy Heffelfinger and Kevin Green limited the Athletics to 4 hits and whiffed a combined 10 in the 6-inning win. Jack Phillips and Scott Meckley had 3 base knocks each, and rookie Adam Freeland doubled twice and drove in 5 for the Jays.

Jim McMahon, Luis Delgado, and Mike Lizzi each had 2 hits in the Orioles win. Bill Rexroth notched the win with 4 shutout innings and Dan McWilliams went 3 for the save. Steve Hanson belted 3 hits and Jim Lyter ripped two for the Yankees.

Hit a triple on your birthday, commissioner buys you a milkshake. Good luck!

The A’s will be looking to get the offense back on track after a rough opener. Getting top pitcher Shoff back will help. Orioles runs all came from top 5 spots in the lineup in their opener. When will the bottom of the order gets into the act?  Orioles win.

One run scored between these two last week, despite plenty of hits. You gotta string them together, fellas. Phillies should get top pick Anderson back for this one (anyone see a trend here?), but the Brewers even their record.

Freddy thinks this game could go a long way to deciding the AL title. Angels might be Freddy’s sleeper, but you can’t sleep on a Hostler team. Could come down to whether or not Drake can work his way on with a late game HBP. Astros wear one.

After a rash of injuries derailed his team in 2019, now Red Sox skipper Poff loses his second rounder for a few weeks to an off-field injury. Can’t this guy catch a break? The Blue Jays hope to add insult to injury. Your momma is so ugly…Jays.

The Rockies scored in bunches in their opener, a plan that Coach Stambaugh drew up to perfection. Meanwhile, the Pirates reportedly have one more week to go until they are at full strength. Looks like a laugher to Freddy. Rockies roll.

Word is Hoke has been scouring the Help Wanted ads trying to find ace Archambault a job where his Sundays are open. Yankees could be looking to hire too if only nine continue to show, but they won’t need a full shift today. Yankees are a Monster, Indeed.

Game of the Week

Fellow managers snickered not-so-secretly at the draft when Mercado and Gartland seemingly bypassed pitching and focused solely on offense. The move seems to have worked as both notched wins on opening day. Mercado and Gartland each picked up wins in the opener, and a cornucopia of arms filled in the later innings. This one promises to be a slugfest. First one to a dozen wins. Edge to the Braves.

AL/NL Players and Pitchers of the Week

The AL and NL Player/Pitcher of the Week for week 1 are:

Player/Pitcher of the week award winners are chosen by a panel of volunteers. Winners will be entered into a random drawing at the end of the year where one person in each group will receive one free banquet ticket.

To view previous Player of the Week award winners, please go to the BULLETIN BOARD section of the website.

Members of the 30 Year Club Honored on Opening Day

Most of you have seen and heard in recent weeks that this year marks the 30th anniversary of the York County Oldtimers Baseball League. But did you know that we have 5 gentlemen who have played in all 30 YCOBL seasons?

On Sunday, the league recognized each of these 5 men for their commitment to the league with a gift card for - what else - $30. So to CHARLIE BUBB, MIKE KESSLER, STEVE HOKE, RON HOSTLER, and MICHAEL SCHAALE, we say thank you. Here's to the next 30 years! 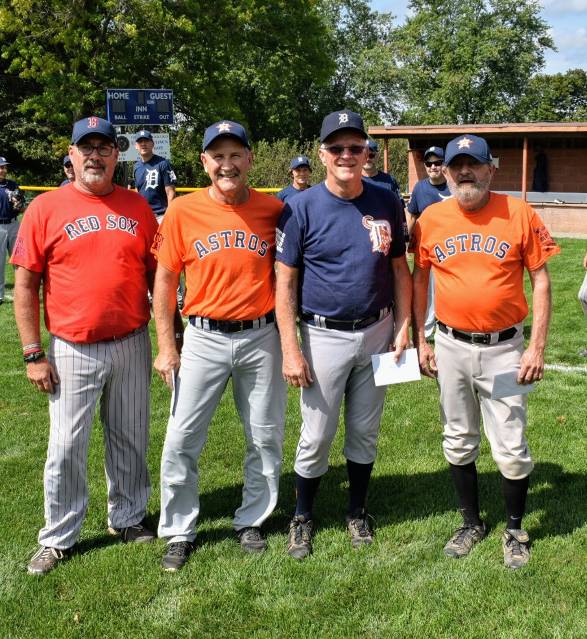 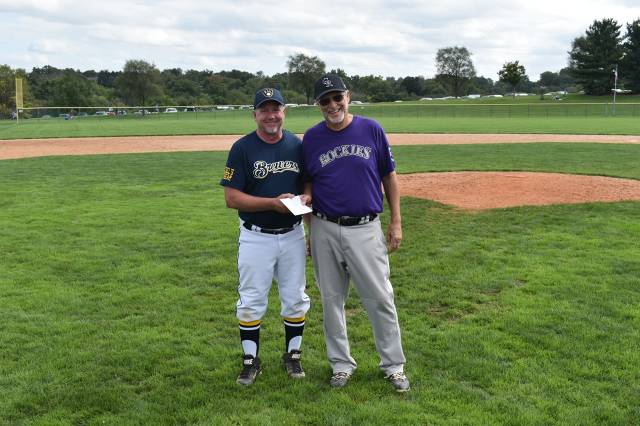 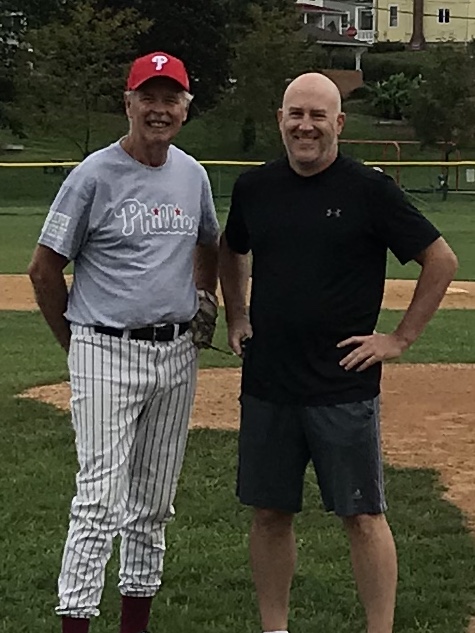 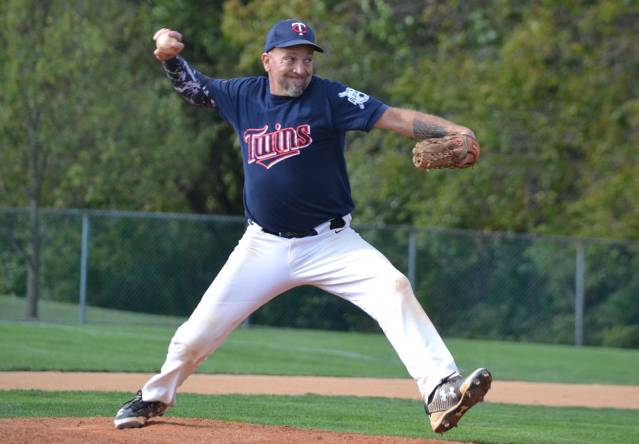 The men, the myths, the legends return to Oldtimers this Fall season.

Kick off Sunday September 13th, be there or be square.

Congratulations to the winners of this year's YCOBL/Kenneth Hersey Memorial Scholarships. They are:

Thank you to scholarship chairperson Dianne Poff for her time and effort, as well as all the individuals and businesses (team sponsors) who have assisted with funding these scholarships and helping to keep Ken's memory alive.

2021 YCOBL/Kenneth Hersey Memorial Scholarship applications will be available in early 2021. 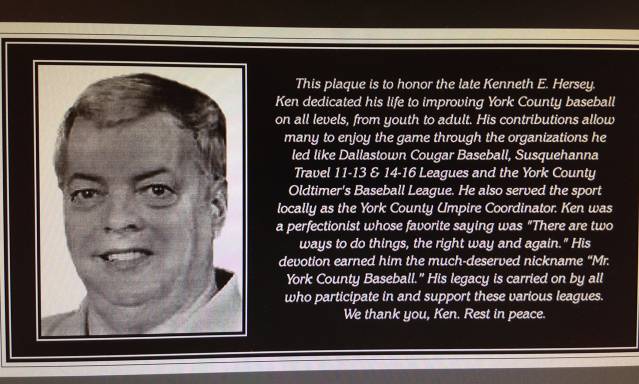 ATTN: Veterans! See if you can find a picture of yourself on our Flickr page. Photo"s by Kent Moyer.