Coach Magrini with the South Bergen Mets from 2009-10 and went on to play 4 years at Kings College in Scranton, PA.

He is currently the Varsity Assistant and 1st Base Coach at Paramus Catholic HS with Coach Magrini. He also has coached the 14U team in the Summer.

Coach Yurko is an alumnus of Wilkes University where he played catcher. He then went on to teach and coach at Westwood High School. He was the Head Coach there for 21 years. His 324 victories makes him the winningest coach in school history. He won 20 games 9 times. Westwood had a run of making the state and county tournaments in eleven out of 13 years from 199-2011. Including making the finals of the Bergen County tournament in 2006 and 2010, a outstanding feat for a Group 2 school. Westwood also won 4 league championships. His 2006 team was voted the Bergen County Group 1/2 Baseball Team of the Year.

Coach Yurko has had 23 players named All-County including 7 1st teamers. 34 of his former players have gone on to play at the college level, including 2 that have played professionally.

Coach Yurko joined the NJ Yankees staff as the 16U Manager in 2015 and has been valuable in player development and preparing his players for the next level. His is also our head catching instructor. 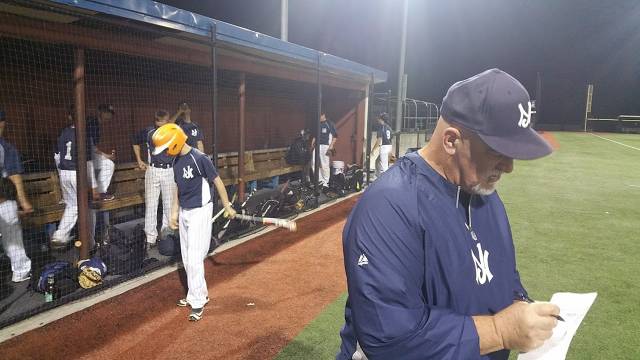 Chris was a 3 year starter at Queen of Peace HS as a catcher were he was All League. He then went on to play at Kings College of Pennslyvania(D3). He has coached travel ball with the NJ Ironbirds 14u and managed the NJ Yankees 15U team.   He has also been the Head Freshmen coach and Varsity assistant at Paramus Catholic HS.

Ray is an alumnus from Paramus Catholic HS. He then went on to play Division 1 baseball at St. Peter's college as a 4 year player and middle infielder.

He also is part owner of Luna Baseball Academy in Paramus, NJ where he is a hitting and infield instructor.

Scott Luna- Asst. Coach and recruiting adviser for the 17U Showcase Team.

Scott is a Lodi HS alumnus who then played collegiately at William Paterson University.

He was an assistant coach at Lodi HS before starting the NJ Mariners Organization which was one of the top youth travel programs in North Jersey. From there he went on to coach at Paramus Catholic HS, where he took over as Head Coach in 2008 and continued before retiring from PC in 2018. He has became part of the 100 wins club in Bergen County and finished with 124 wins.  He also has been an associate scout for the Seattle Mariners, and instructor with Ripken baseball.

Scott has been a coach and adviser for the NJ Yankees since 2011, including being the 18U manager in 2012 where he coached his son and NJ Yankees alumni Garrett Luna who is currently playing at Felician College.

He currently own and operates Luna Baseball Academy in Paramus, NJ. He also has started the Luna Basebal travel baseball program for youth levels 8-12U.