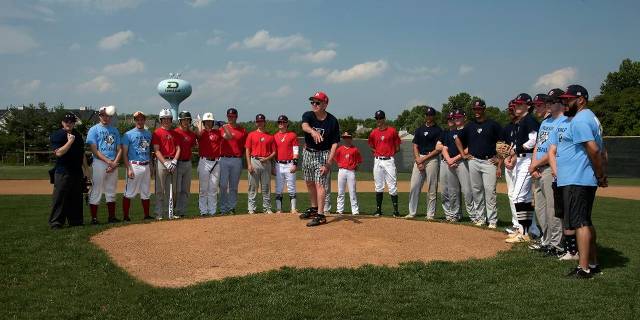 On Sunday, May 19th, under azure skies at Damascus High School, Damascus American Legion Post 171 kicked-off the 2019 American Legion baseball season with its annual tribute to Mr. Bob Bellison, a stalwart baseball supporter and baseball committee member since the inception of the program in the mid-1970's.

The  2019 festivities began with presentation of the Colors by the Post 171 Honorary Color Guard (Bill Green, Larry Matthews, Wil Cole, and Brownie Chichester). After the players', alumni's, and coaches' introductions, Mr. Bellison administered the American Baseball Player Oath to this years diamond ambassadors before delivering the first pitch, a strike down the middle according to Mr. Bellison. Shortly thereafter, the baseball squad was divided into two teams, Red and Navy, and played an abbreviated game of 4 innings with the Red squad downing the Navy squad 3 - 0.

After the game, everyone was invited to a family-style potluck picnic at the American Legion home for hamburgers, hot dogs, and fellowship.