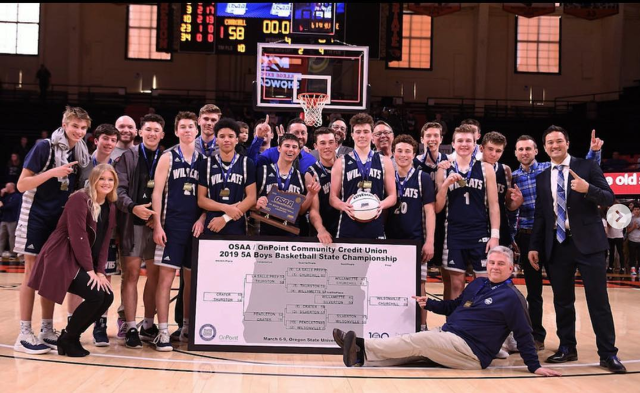 THE 5 PILLARS OF WILDCAT BASKETBALL

COMPETE: Every day, every drill, every time we take the floor;

WILDCAT D: We control our effort and to a large degree our performance on defense, so we are committed to being superb defensively every time we take the floor and in every game in which we play;

GREAT SHOTS: Our success is heightened when we play team-oriented basketball characterized by sharing the basketball and when our decision-making and shot selection are great;

FUN & ENTHUSIASTIC LEADERS: Within the parameters of authentic commitment to team goals, we want to have fun, play with uncommon enthusiasm and develop tremendous leaders focused on their team and willing to invest in their teammates, young men who ultimately are capable of greatness; &

CLASS: Wherever we go and whomever we play, we will do our best to do so with class.

Author of "A Boy, A Ball, A Dream", published by The Christopher Publishing House of Hanover, MA in 1993

STATEMENT ON  THE WILDCAT HOOP CAMP:
Each Summer, the WHS coaching staff conducts the Wildcat Hoop Camp. Typically, there are two weeks of camp and a single day skills session. We look forward to seeing our future Wildcats at camp every summer.
Our camp is not restricted to future Wildcats, but it is special in that we are the only camp that comes at everything we do from the Wildcat Basketball perspective.  Our hope is that everyone at camp will have a great time, develop their hoop skills and fundamentals, and learn a little bit about Wildcat Basketball -- who we are, what we believe, and why we approach things the way we do.
Everything in the off-season is optional for our guys. Some choose to immerse themselves in hoops because they are passionate about basketball and want to get better.  That's great! Others are preoccupied with other interests. That's okay, too.  Wherever you fall on the commitment spectrum, camp can help everyone -- from the best and most talented players to those just being introduced to the game.  Everyone has an opportunity to compete, listen and learn and those that choose to attend camp with an authentic goal of improving almost always leave satisfied and that much closer to becoming a great Wildcat.
Thank you for your interest in the Wildcat Hoop Camp.

DISCLOSURE ON CAPITOL CITY CLASSIC:
In 2015 -- in an effort to ensure that deserving Wildcat teams and players would be assured the opportunity to play in at least one high-level competition pre-season tournament -- Coach Roche was involved with a small group that founded the Capitol City Classic high school basketball event played at Willamette University in Salem.  The express goal of this effort was to create more opportunities for high-level tournament experiences at a neutral site for our Wildcat student/athletes and other programs in the Mid-Valley who similarly have been largely left out of those opportunities.  Coach Roche remains intimately involved in the operation of the CCC event.  Coach Roche is not paid for his work on the CCC; however, he could benefit financially from the operation of the CCC if the event were to turn a profit in any given year.  Through the event's first several years this was not the case.  We share this, however, by way of being transparent and disclosing this relationship.  Moreover, Wilsonville has participated in the CCC not for the benefit of Coach Roche or any other individual, but rather because the CCC has proven to be a great event offering Wildcat teams outstanding experiences and competition and it has filled an experiential void in the Wildcats' schedule in a truly exceptional way as judged by our student-athletes who have participated in the event over the years..  In addition, the decision to play in the CCC (or not), or to play in any game or contest in any given year, is a decision that is not up to the coaching staff alone in vacuum; rather, the schedule is ultimately approved and finalized by the WHS Athletic Office in consultation with the coaching staff.