"Commitment is what transforms a promise into reality. It is the words that speak boldly of your intentions. And the actions which speak louder then the words. It is making the time when there is none. Coming through time after time after time, year after year after year. Commitment is the stuff character is made of; the power to change the face of things. It is the daily triumph of integrity over skepticism."
~~~~~~~~ Abraham Lincoln 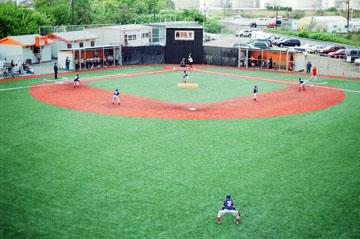 If you’ve seen the movie, you know the line well. The voice heard by Kevin Costner, who stars as a corn farmer and avid baseball fan, inspires him to build a baseball field on his farm with hopes of having legendary baseball players come play on it. In the end, the field is a state of the art baseball palace, and the players do, indeed, come.

In August of 1997, Bayonne Cal Ripken Baseball (then known as Bayonne Bambino Baseball) set out on a similar mission. With a vision to produce the greatest youth baseball program of its time, a group of men formed a league and called 5th Street field their home.

The field was a disaster. The compound was more than questionable. There were no dugouts, no press box, no running water, no electricity, no outfield fences, no scoreboard, no clubhouse, no bathrooms, and no concession stand.

But one thing that was not missing………. was a dream. A dream to make this “baseball diamond-in-the-rough” a place that both kids and parents would someday to be proud to come to.

In 18 years, the lot at 5th Street Field has become The Yard @ Haddad Stadium.

From four men with a “pipe dream” to over 100 volunteers and growing today………..

From carrying numbers out on a home-made scoreboard in between innings to the Orange Crush..

From keeping score behind the backstop in a lounge chair to doing it in the Press Box…..

From having meetings off site in a recreation building to having them in our own Club House…….

From playing on a dangerous field to installing Field Turf – the most amazing playing surface of our time.

From a gravel parking lot to a magnificently paved one...

From Mission Impossible to Mission Accomplished !

In 1998, you’d have been reluctant to take your dog to this compound………In 2005, the Foot Locker Corporation entered into an agreement to have their illustrious name stamped on it. Then, in 2009, Haddad Corporation took over sponsorship rights for the field.

A big dream, dozens of great people, and a vision that never stops with an emphasis on doing what’s right for the kids of our town. And from 1998 through 2003, we did it all without having a mandatory registration fee to participate. Imagine that !

If you’re not growing, you’re dying…….and without a big dream, you’re dead.

We won’t stop dreaming and we hope you can help us be a part of the already historic movement we call Bayonne Cal Ripken Baseball.