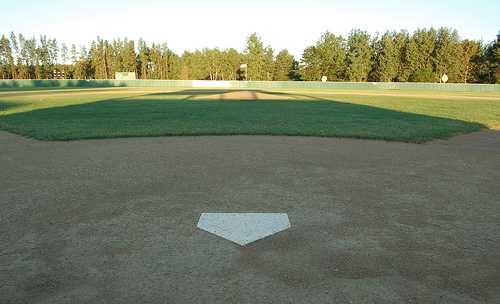 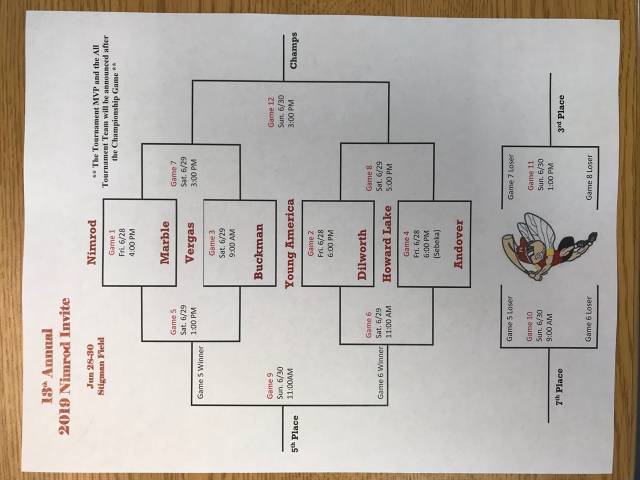 Welcome to the home of the Nimrod Gnats. The Gnats have been a perrenial contender in the Lake and Pine.  Nimrod has won numerous regular season and playoff championships in the league.

The town of Nimrod is located on the Crow Wing River just 13 miles from Sebeka. Driving towards Nimrod on Hwy. 227 you will come around a curve and see a small church and a sign saying NIMROD POP. 75. Then you'll see a few houses, a gas station, a bar, and then if you cross the river you'll have missed our little town.

The baseball field in Nimrod, Stigman Field, is named after the Stigman family. One of the boys in that family, Dick Stigman, was a standout pitcher in townteam and high school baseball. He went on to pitch in the Major Leagues for the Minnesota Twins, Cleveland Indians, and Boston Red Sox. He was selected to pitch in the 1960 All-Star Game during his rookie season. He was also a member of the 1965 American League Champion Minnesota Twins. Dick Stigman also holds the Major League record for most consecutive starts without a decision (10).

There have been a lot of changes with the team over the past 15 years. The field was dedicated and named, a grandstand was built, a grass infield installed, a new backstop, an electronic scoreboard, as well as a new fence. The field alone is a huge change from the skin's infield and snowfence that it used to be. The team also became the Nimrod Gnats (formerly the Nimrod Rangers) and the colors became Maroon and Gold. The Gnats have been to the State Tournament 4 times (1998, 2001, 2002, 2015).

Every year since the 1979 centennial celebration Nimrod has annually had the Nimrod Jubilee Days celebration. There are fireworks, a parade, a 5K and 10K race, a slowpitch softball tournament, street dance, the Nimrod Mud Run, a mud volleyball tournament, and the Nimrod Bull Bash. If you don't have plans for Labor Day, swing into Nimrod for a great smalltown celebration as Nimrod transforms from a town of 75 people, into over 1000.

If you are traveling through Nimrod this summer, swing in and take in a game. Then stop into Nimrod Bar and Grill for a cold drink and a burger basket. Nimrod Bar is conveniently located right in front of the ballfield in the middle of town. You can also go for a swim in the Crow Wing River down at the bridge. Hopefully you will get a chance to come to a few games this summer, or if you've never been to Nimrod, we hope that you pay us a visit in 2018.