MABL Southern Wisconsin helped sponsor its first ever team at the MABL/MSBL World Series in Phoenix, AZ this October.  Thirteen players from our league formed the nucleus of a very competitive team in the 50 and over World Series.  Randy Gaber, Mike Schoonveld, Steve Hill, Mark Von Dem Bach, Mike Wallace, Brian Buol, Jim Pliner, Randy Olivares, Andy Winn, Steve Kelliher, Steve Hirshfeld, Eric Selje, and Jeff Knight, along with two friends from AZ, and two friends from Oregon helped form the Madison Blues.  The 50+ tournament included 28 teams from all over the world, and as you can imagine, several quality ballplayers.  The Blues played teams from Canada, Australia, St. Thomas Virgin Islands, California, and Washington DC Area and posted a 4-2 record during pool play, good enough for a nine seed in the 12 team playoff bracket.  Most of the Blues pool games were very competitive, including 3 one run games, one 3 run game, and two walk off victories.  The highlight of pool play was our "home" game when we played Australia at American Family Ballpark in Maryvale, the Spring Training Home of the Milwaukee Brewers.  Australia's starting pitcher was a member of the Australian Olympic Baseball Team in 1988.  He baffled the Blues for four innings, but the Blues bats ultimately won out as they cruised to an easy victory.  The Blues matched up against St. Thomas Virgin Islands in their playoff game and battled throughout, holding the lead early.  St. Thomas battled back and took a three run lead into the 8th inning.  The Blues rallied and had the tying run at the plate but came up short in the 9th to end their run.  All in all, it was a great week of highly competitive baseball for our squad, and one that we can all be proud of.  With a few more Madison players, we have no doubts we can compete with teams very effectively from all over the world.    We highly recommend this experience and hope we can send more teams to AZ in the future across all age groups.

The Angels capped off their impressive season in the Madison (Southern Wisconsin) 18+ MSBL with their first ever championship! It had been a long time coming for the Angels and some of their veteran players including Manager/Short Stop Douglas Wolf, 2nd basemen Brad Simon,  catcher Gary Nevala, and infielder Jeremy Johanski who remember the beginning years of the Angels when they were an expansion team in 2012, struggling to win any games early on. Recent years have seen the Angels continue to climb the ranks and this year they took the #1 seed during the regular season. The playoffs were highlighted with great defense and amazing pitching for the Angels, only allowing 1 run in their 3 playoff games. With their team ERA leader, Will Coleman, injured right before the championship game, it was on the shoulders of their other ace, Jake Shields, to provide a great outing against the very tough A’s. After struggling slightly early and falling behind 1-0, Shields did just that. He settled down and excelled to pitch a complete game allowing just that one run. The big hit of the day came from cleanup hitter Jimmy Carrington who broke open a 1-1 tie with a 3 run homer over the left field fence, taking the momentum of the game the Angels way. After that, it was shutdown pitching, solid defense, and a few more timely hits that ended in a 6-1 victory and a first championship celebration for the Angels!

The Buckinghams claim the 17+ Championship in an Epic Battle.

Check out the story on the MSBL National Website. 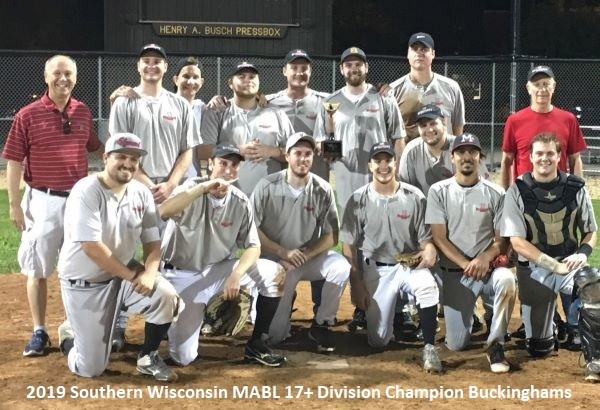 Congratulations to the 2019 Bears

The 52+ Bears finished in 1st place for the regular season, and beat the Bulldogs and Reds in the playoffs to take the championship crown.   The championship game against the Reds provided a dramatic finish with the Bears ahead the entire game when the Reds notched 7 runs in the seventh to take a 12-11 lead. Dan Hendrickson rallied his team as Dave Bayer led off the inning with an infield hit and eventually came around to score the tying run, setting the stage for Greg Gaber to crush the walk-off winning run.

Earlier in the game, the Reds decided to load the bases with two outs with an intentional walk in the sixth, but Daryl Johnson thwarted that strategy with a 2 run hit. The top four in the lineup: Andy Hess, Todd Edwards, Greg Gaber and Mike Arnold, recorded 11 hits and 8 RBI's.  Marty Wojcik recorded the win, pitching 2/3 of an inning.

Every Bear contributed to the team's success, as the Bears' "Never-Let-Up" attitude and fun positive energy made it a special year. 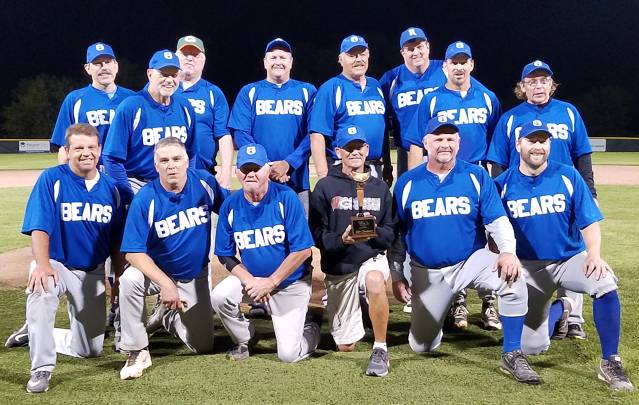 The Men's Senior Baseball League and Men's Adult Baseball League (MSBL/MABL) is a national organization founded in 1988 that has grown to more than 325 local leagues, 3,200 teams, and over 45,000 members. It is real baseball at a competitive level on a regular basis in a professionally run environment.

The MABL of Southern Wisconsin teams play in full uniforms on groomed fields in the Madison area with experienced and qualified umpires.

Experience the camaraderie and friendships with others that are passionate about this great game!
Interested in joining a team?
Add your name to the Player Pool!