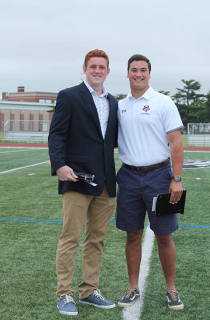 Hugh Kelleher (left) of MacArthur and Nick LiCalzi of South Side at the Flatley
Award presentation on June 17 at Sewanhaka High School. 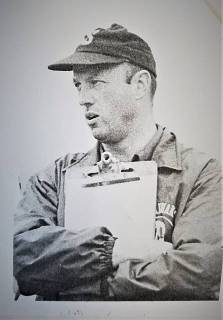 A little over a year ago, Greg Raschdorf had an idea. He wanted to honor his former football and lacrosse coach from his days at Sewanhaka High School, the late Tom Flatley. He remembered that at Sewanhaka there was an award, the Billy Bocker Award, for an outstanding football and lacrosse player. “I felt that it was appropriate to have a similar award with a lasting tribute to Tom Flatley for his contribution to both sports at the high school level in Nassau County” Raschdorf, a 1975 Sewanhaka graduate, said last night as the inaugural Tom Flatley Award was presented to seniors Hugh Kelleher and Nick LiCalzi in a ceremony held at Sewanhaka.

Kelleher, from MacArthur High School, and LiCalzi, from South Side High School, were chosen as co-winners of the Tom Flatley Award by a committee of coaches from the Nassau County Football Coaches Association (NCFCA) and the Nassau County Lacrosse Coaches Association (NCLCA). The award ceremony took place last night at Sewanhaka, a school that Flatley coached both football and lacrosse for the first twenty years of his storied career. Several other committee members as well as Raschdorf spoke about Flatley, his career and his legacy before awarding the co-winners their plaques and scholarships in front of numerous family members, coaches, and friends.

The selection committee was led by Joe Baccarella, a 1981 Sewanhaka graduate who played for Coach Flatley and later served as an assistant coach for him at Garden City.  “Coach Flatley had a positive influence on so many people in Nassau County” Baccarella said, “that it became easy to get this well deserved award off the ground”.  Other members of the committee included Raschdorf, Garden City football coach Dave Ettinger, Garden City lacrosse coach Steve Finnell, Cold Spring Harbor lacrosse coach Dennis Bonn, Farmingdale lacrosse coach Mike Hungerford, Oceanside football and lacrosse coach Rob Blount, and Plainview Kennedy football coach Chris Rogler, who also serves as the NCFCA president.

Kelleher and LiCalzi were chosen from a number of candidates that had been submitted by their coaches in late May. Criteria for the award stated: “The Tom Flatley Award will be given annually, beginning in 2020, to a  Nassau County student-athlete that competed at a high level in the sports of football and lacrosse throughout their high school career. Other criteria that will be considered includes athletic and peer leadership, academic success, school and/or community service and additional extracurricular participation.” Baccarella, a Hall of Fame coach in his own right who won a state lacrosse title at South Side in 2004, said the committee was impressed by the resumes of the candidates. “It was impressive to see that so many student-athletes in Nassau County had the credentials to be considered for this award” Baccarella stated, and “in the end both Hugh and Nick were so outstanding that the committee believed the only fair thing to do was to give the award to both of them.”

It was noted during the ceremony the influence that Flatley had on so many lives during his career. Dennis Bonn, a 1984 Sewanhaka graduate, played both football and lacrosse for Flatley. In those days, Flatley was the defensive coordinator on a Sewanhaka football staff that included other hall of fame coaches, Bill Piner and Joe Knoll. In the spring Flatley had double-digit victories in each of his six seasons as the head lacrosse coach including a Long Island Championship in 1981, the first and only in Sewanhaka history. “Coach was the reason why I played lacrosse”, said Bonn, who has won four state lacrosse championships and a Long Island football championship as well at Cold Spring Harbor since 2000. “Coach was a man of few words, but when he spoke, you listened,” Bonn said, before presenting flowers to Flatley’s daughter Christine Bellocco who attended the ceremony with her husband and children.

Flatley, who passed away just a few weeks ago of complications from pancreatic cancer at age 80, spent the majority of his career at Garden City as the football coach in the fall and the junior varsity lacrosse coach in the spring. From 1985 to 2014, Flatley’s football squads won eighteen Nassau County championships, appearing in fourteen Long Island championships with five victories. The Trojans were voted Rutgers Cup champions on four occasions and had six undefeated seasons. From 1990 to 1992, the Trojans won thirty consecutive games, one of the longest streaks in Nassau football history. Coach Flatley’s career win-loss record in football at Garden City stands at 264 wins, 44 losses and seven ties, and his winning percentage of eighty-six is the highest of any football coach in Long Island history. In addition the New York State Sportswriters Association crowned Garden City the #1 ranked team in the state five times.

Both Kelleher and LiCalzi had impressive football resumes. Kelleher was a three-time All-County and two-time Newsday All-Long Island selection at running back and linebacker. “Hugh was an incredible player in football,” said Steve Finnell, the Garden City lacrosse coach who also serves as the defensive coordinator in football on head coach Dave Ettinger’s staff. “When we scouted him, we wondered ‘how do we defend him’,” he added, also noting that even in retirement, Flatley had seen Kelleher play and was equally impressed by his abilities. LiCalzi, a two-time All-County and All-Long Island selection, led the Cyclones to the Conference III championship game. Phil Onesto, the South Side football coach added, “Nick is the most highly decorated football player that South Side has ever had.”

Shortly before his passing, Baccarella took the resumes of all the candidates to show to Flatley. “We spent about two hours going over the information that had been sent in by the coaches. He was very impressed by them all, but Hugh and Nick really stood out to him’” Baccarella said, “He had seen them both play both sports and also was impressed by their community service and level of academic achievement.” Both student-athletes had high academic averages, had taken numerous AP and/or IB classes, and were deeply involved in their communities, running fundraisers and going on church mission trips.

As the junior varsity lacrosse coach at Garden City from 1988 to 2019, Flatley’s teams had an overall record of 357 wins, 31 losses and two ties, a winning percentage of ninety-two. “Few coaches have the ability to coach two sports at the level Coach Flatley did”, said Finnell, a Garden City graduate who has won three state championships and ten Nassau titles as Garden City’s lacrosse coach since 2007. “Having played for Coach, and then having the opportunity to work with him for many years I feel blessed” Finnell added, noting “few programs anywhere in any sport had a junior varsity coach of his ability.”  Flatley was so highly regarded in the sport of lacrosse that in 1982 he was named the coach of the United States National Team. The result? The squad won the World Championship later that year.

Like Flatley himself both honorees have received high honors in the sport of lacrosse. LiCalzi was one of only three players in Nassau history to be named a US Lacrosse All-American as a sophomore. He dominated games from his longstick midfield position, and was a repeat All-American as a junior. Widely regarded as one of the best at his position in the country, he will be attending the United States Naval Academy in Annapolis. Only the loss of this season due to the Covid-19 pandemic prevented an All-American three-peat for LiCalzi. Kelleher, a midfielder has been a mainstay on the MacArthur lacrosse team since eighth grade. An All-County selection in 2018 and 2019, he, like LiCalzi was on track for an All-American season before the pandemic cancelled the 2020 season. Heavily recruited by top academic schools in both sports, he will be attending Cornell University in the fall and will play lacrosse for the Big Red.

At the ceremony, both student-athletes received their awards and a scholarship for one thousand dollars from the NCLCA. Baccarella, the vice-president of the National Interscholastic Lacrosse Coaches Association, thanked the members of the committee for their work. “We received numerous donations from Sewanhaka and Garden City alumni, as well from athletic organizations in several communities to fund this award”, said Baccarella. Hopefully the donations will continue to come in and we can keep this going for many years to come.”

Tweets by theNCLCA
Our Sponsors