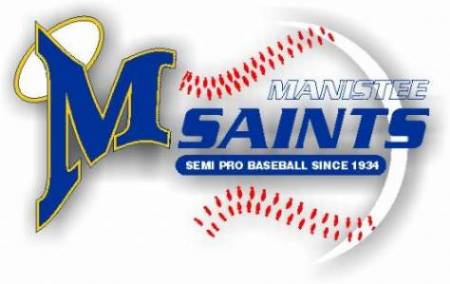 Proctor, Detroit Tigers prospect who was given permission to play for the

Saints when the minor league season was cancelled, had a monster year at the plate, hitting .527 and an amazing .615 with runners in scoring position; with 7 doubles, 4 home runs, and 23 runs batted in.

MacNeil also had an amazing season, setting a team record by finishing the season without allowing an earned run. Roddy put together a scoreless innings pitched string of 26.1 innings that included a 9-inning no-hit game. He finished the season with 4 wins and 0 losses, 40 strikeouts in 29.1 innings and an earned run average of 0.00.

Proctor and MacNeil, along with outfield Logan Briggs, were also named to the Great Lakes UBL All Star team.

SAINTS ARE THE CHAMPIONS!

With heavy rains in the Grand Rapids area making both tournament fields unplayable, the

Manistee Saints were awarded the tournament championship on the strength of their 3-0 record,

the only unbeaten team in the field.

The Saints recorded wins over the Flint Legends (8-7), the Grand Rapids Brewers (3-1),

and the Berea Blue Sox (9-4) to win the tournament title.

SAINTS ADD TO HALL OF FAME

The Manistee Saints are proud to announce the election of Nick Papes to their baseball Hall of Fame.

with 45 extra base hits and 133 runs batted in. Nick was also a strong defensive player, breaking in at shortstop but more than

adequately playing all the infield positions.

Nick is the third member of the Papes family named to the Hall, following his dad Ken and brother Kenny Mack

into the Hall. Nick prepped at Mason Co. Central in Scottville, went on to play college baseball at Aquinas College, and currently

teaches at Lake Leelanau St. Mary’s where he is also the baseball coach.

Due to the Coronavirus induction ceremonies will be held at a later date.