Welcome to the Home of the

The Braves battled on Sunday and overcame a late inning rally by the Sox to emerge victorious, 10-7.  On the hill, Kevin Eldreth shook off a decade of rust and turned in two innings of one run ball striking out two.  The ageless Bill Benson hurled a solid four innings allowing two runs on four k's.  Paul Valle was stung by some bad luck later in the game, but picked up the victory after Tim Deyesu came in to shut things down in the 9th.

At the plate, Jamal Frazier continues to light things up going 3-3 with another rally sparking bunt, earning himself another 'Big Kahuna' award and game feather to boot.  Bill Benson tacked on four RBI's to help the tribe's cause, earning himself a game feather with his pitching performance in mind.  Other notable offensive performances include Chuck Pindell (2 hits, RBI), Ryan Wolfsheimer (2 hits, 3 runs scored, 2 walks) and Tony Collins (2 hits, 1R, 1RBI).

Look for the Braves back in action this Sunday at Patterson Mill High School hosting the Nationals.

It was a two for one night for the tribe on Wednesday.  After the Astros forfeited the originally scheduled game, and the Braves came back for a wild win against the Phillies, the Wahoo's found themselves in a 5 way tie for 2nd place.

In what could have been a disaster of a loss, the Braves overcame some miscues and growing pains with a new roster this summer to scrap out a defining win in this 2020 campaign.  Not a whole lot happened at the dish this warm summer evening for the Braves, but Ryan Wolfsheimer broke what has to be a Braves single game record with FIVE stolen bases on the night.  He added a couple walks, three runs and a double in his doggie bag.  A few other guys added a knock here and there, but a Jamal Frazier "sudden death" bunt with two strikes in the last inning that was destined to stay fair, setting up the winning run, gives him a Braves team-first 'Big Kahuna' award.  Not to mention the assist he made from left field to keep the win within reach in the 6th inning.   Tony Collins finally got the monkey off his back with a knock to drive in the winning run in extras to the delight of a capacity crowd of 8 fans at the gates.

On the hill, Paul Valle continues to impress during his 2020 campaign with Tim Deyesu picking up the win in shut down fashion to close out the last three frames.

Look for the Braves in action again this Sunday vs. the White Sox at Patterson Mill High School for a pivotal mid-season summer contest.

Some familiar faces, and some new faces, took part in a total team effort that started off slow, but picked up steam as the game went on.   Paul Valle would start the game on the hill for the tribe going three strong with 4k's and allowing just 3 hits.   Bill Benson Sr. came in for a solid 4th and 5th inning frames, allowing one run on on two hits, picking up the W thanks to a solid offensive performance from his team mates in the bottom of the 4th.   Darrion Siler and Corey Weigman, the latter pulled out of the Braves Hall of Fame with his knuckle ball earlier in the week, would round out the last two frames on the day, neither allowing a run, and both picking up 2 K's each.

At the dish, Braves alum Chuck Pindell came back from the dead to collect a gapper for a double, score two runs and only lost one hamstring along the way.   Chuck is day-to-day and should be ready for next Sunday after a few cold ones this week.  Tim Deyesu would pick up a double, score a run and drive in two and uncharacteristically is not atop the Braves offensive rankings for batting average... expect that to change next week though.  Siler drove in the first run of the 4th inning with a commanding double off the left field fence that almost went for a round tripper.   Ryan Wolfsheimer overcame a bad case of gout this past week to find himself a single, RBI and run scored.  Valle picked up a huge single in the 4th inning driving in two.  Others contributing at the plate with hits this week were Billy Benson Jr., Matt Buerhaus and Bill Benson Sr..

Look for the Braves in action next week vs. the HMBL Phillies.  The first 10 fans at the gates will receive a talking Bobby Neukum bobblehead doll.  Pull the string and hear El Nuke's favorite line after games "auto pilot" grace your ears with Bobby's own authentic voice recording.   Nuke will be hanging out after the game for autographs by the batting cages.

Career Braves records for the Harford Mens Baseball League have been updated on the site and can found in the pages drop down menu.  Enjoy!

The Braves concluded the 2019 spring/summer season going 21-8 between two leagues.  They picked up their 500 win as a ball club!  They won the weeknight league championship going 9-5.  Won the division in the Sunday league going 12-3.

The HMBL single season records have been updated and now include statistical leaders from both leagues this year. 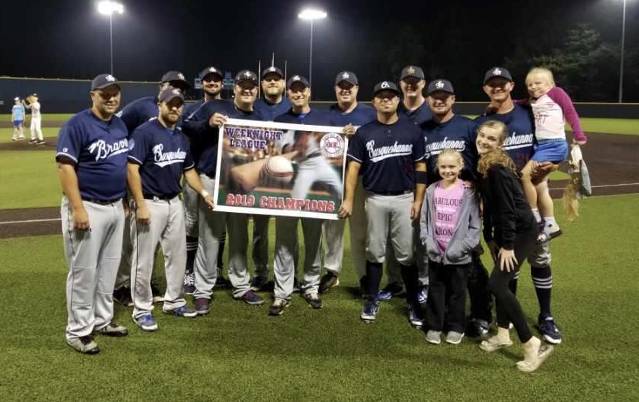 Congratulations to the Mets for a great season and a hard-fought game! 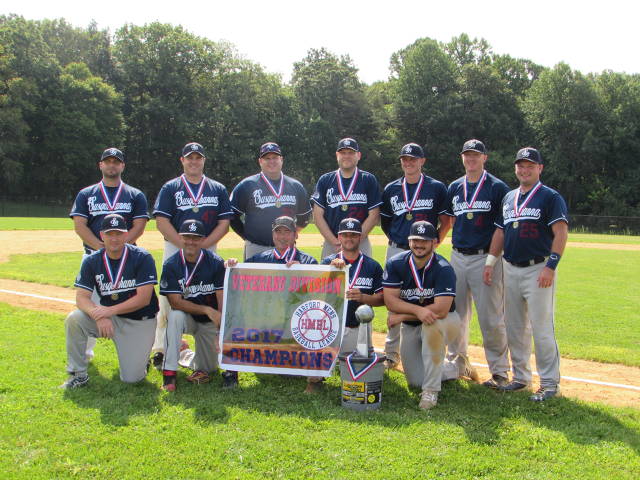 The Braves defeated the Astros 1-0 to win the 2017 HMBL Championship!

Congratulations to the Astros for a great season and a hard-fought game!