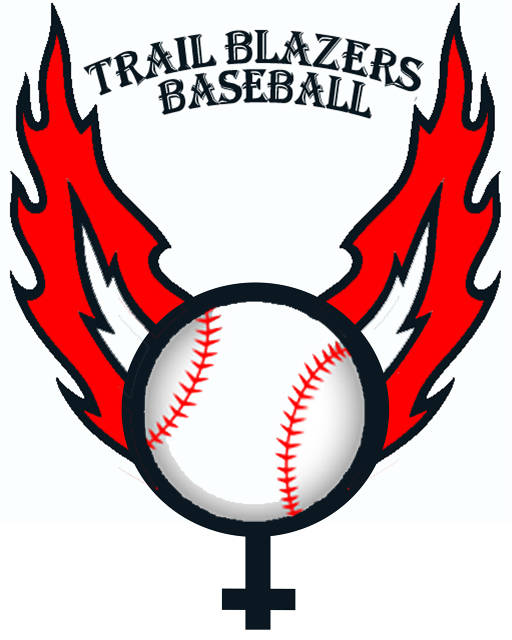 This year we will be sending 2 Teams to Purcelleville VA. to compete in the Diamond Classic 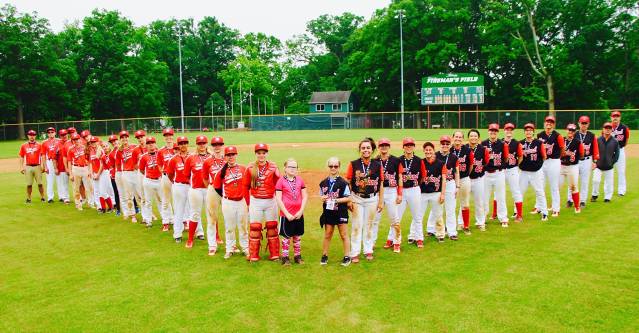 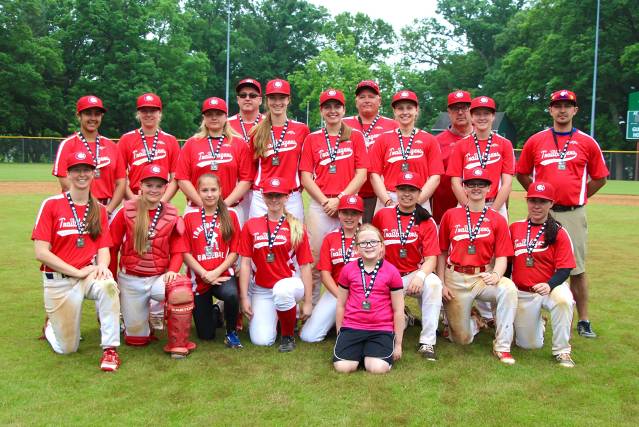 The Eastern Women's Baseball conference established a tournament award called the 10 Award. It goes to person who has a spirit for women's Baseball, like their former Teammate Carmen Dominguez. Carmen passed Away from Cancer and this Award goes yearly to a different person who has affected this tournament, the game and the spirit of sportsmanship. This year's winner was coach Scott Hillman From the Ontario Trail Blazers. Coach's Dad is currently fighting Cancer and knowing what Carmen meant to the Washington Women, made this award that much more special. 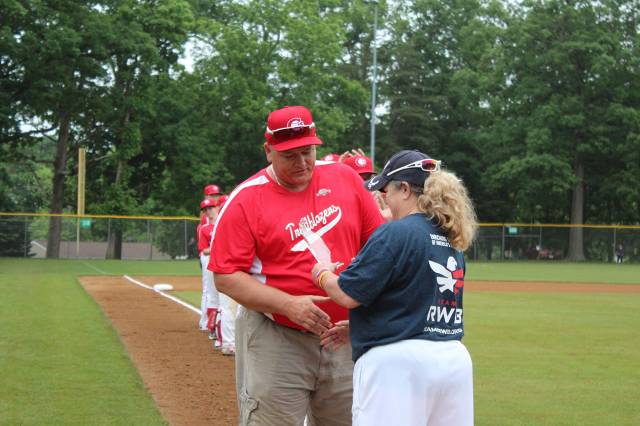 The 2017 Version of the Ontario Trail Blazers captured a Silver Medal in this year's edition of the Diamond Classic in Baltimore Maryland. The Eastern Women's Baseball Conference held their annual Women's Tournament and for the second Straight year the New England Red Sox defeated us in the Final Game. This year the Blazers dropped a 5-2 decision to the Sox. US National Team player Marti Semintelli was brilliant in her start against the Trail Blazers striking out 6. The Trail Blazers defeated the Chicago Pioneers 5-2, defeated the East Coast Yankees 5-2 and defeated the DC Thunder 9-6 while dropping a tough extra inning decision to the Chicago Gems 2-1 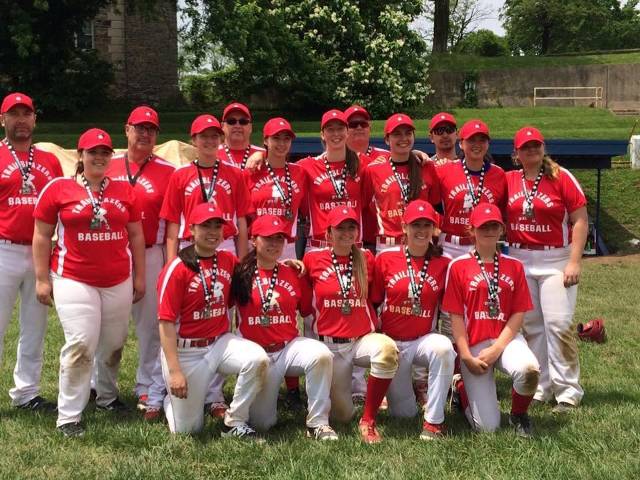 Our young Rookie, although not a ton of at bats lead our Team in hitting

This year in Honour of Carmen Dominguez a former player of the DC Thunder who is honoured year after year at the Diamond Classic with an award in her memory and honor, for dedication and love for the game. This year we wanted to give someone our #10 Award. The lady who runs the Diamond Classic works so hard to pull this off every year. This year I had a jersey with #10 done in our New Uniforms for one very special Human. Thanks for all you do Bonnie Hoffman 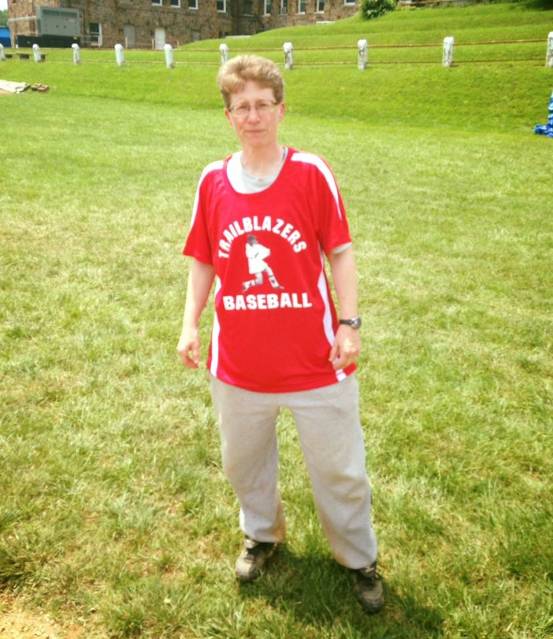 Trail Blazers Capture Gold at the 2015 Diamond Classic In Baltimore 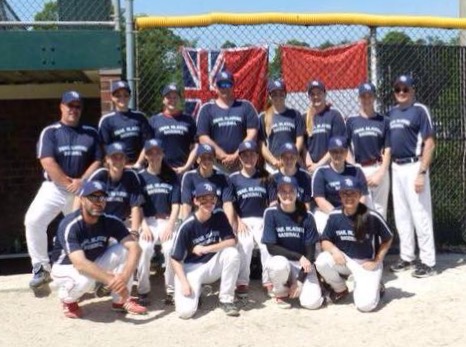 The Ontario Trail Blazers went to the Diamond Classic in Baltimore Md. this past Memorial Day Weekend, and went 5 - 0 to Capture the First Title in the Teams History.

All the members of the Team contributed in some way over the weekend to make the event that much more special. Kaylee Misuida from Brantford, Ontario came in in the 5th inning for a huge pinch hit that scored Stephanie Ellis also from Brantford to give the Blazers a 2-0 lead.

Brinley McLaren from Brantford, Ontario pitched her heart out for 7 strong innings and left the game tied 2-2 going into extras. In the top of the 9th the Red Sox scored a run and went up 3-2. The bottom of the 9th was legendary. Jenna Hillman from Tecumseh, Ontario lead off the inning with a single to right. Lindsay Wilcox from Waterdown, Ontario had a successful bunt single to advance the runner. With runners on 1st and 2nd with no out, thirdbase Coach Dan Boyd from Port Dover, Ontario, proceeded to give the bunt sign to Emma Carr from Scarborough, Ontario, who bunted it between the pitcher and firstbase and Hillman scored from 2nd base on the play. With runners on first and second, Coach Boyd once again gave the bunt sign to Katherine Kennally from Burlington, Ontario who placed a perfect bunt between the pitcher, firstbase and secondbaseman. The Blazers had bases loaded no out and a tie ball game with the number 4 hitter, Jennifer Gilroy from Toronto, Ontario a 2015 Canadian National Team Member and Blazer`s Team Captain hit a 300 ft line drive to left that never got more than 10 feet off the ground the whole way there, to clinch a walk off win for the Franchise. Menna Florio from Vaughn, Ontario, came in for the 8th and 9th to pitch and did the job to give the Blazers a chance and they took advantage of it.

Taylor Knight from Blind Cove, British Columbia and Hailey Boyd from Port Dover, Ontario, were Outstanding Defensively as each of them excelled at multiple positions.

All in All a great Weekend of Baseball.  Special Thanks to Bonnie Hoffman from the Eastern Women's Baseball Conference and all her people for running another amazing tournament.  We will be back!

Special Shout Out to Kevin Marsden and his New England Red Sox for an outstanding weekend.

A Very Special acknowledgement to Jeneane Lesko from the All American Girls Professional Baseball League, for all her help this weekend and her mentorship for all these young ladies. You are a National Baseball Treasure.

I would also like to mention that this win was dedicated to Another AAGPBL Veteran who was with us last year when we won the Silver Medal but has passed in the last 12 months. I would like to dedicate this win to Ms. Pinky Leduc a Trail Blazer in her own right, who touched us all. Pinky, we missed you this year but your amazing daughter Betsy was there with your spirit, you will never be forgotten by the Trail Blazers.

To All the Teams this past weekend, keep plugging away, we will put the Women's game back on the map with all of your help.

Special Thanks to all the Parents who drove and helped out this weekend, you are an amazing group of people!

Baltimore Maryland:  In our first Tournament ever, the Trail  Blazers Women's Baseball Team went to the Diamond Classic and Captured a Silver Medal, losing out to the New England Red Sox in the final game. The weekend was filled with fun and Good Baseball. Pictured here are the Silver Medalists with Jeneane Lesko former pitcher for the Grand Rapids Chicks in the All American Girls Professional Baseball League.  More to come.......... 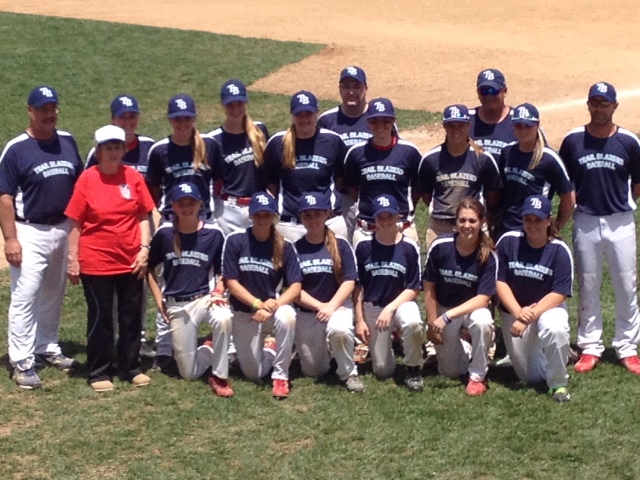 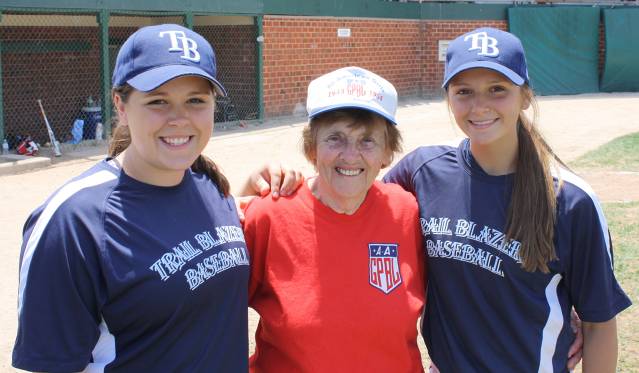 We were very fortunate to meet 2 All Stars from the All American Girls Professional Baseball League form the 40's and 50's. Jeneane Lesko and Pinky Leduc were Honoured Guests at the Tournament. Pictured here is Caitlyn Hillman, Jeneane Lesko and Jenna Hillman. Below is Ms. Lesko in her playing days and Pinky's Baseball Card. 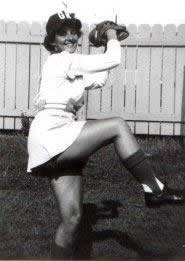 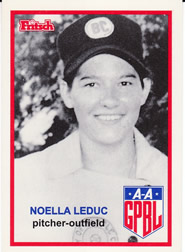 We are Changing the Course a Bit

We are now establishing a Regional Women's Team to compete in Womens Baseball Tournaments whenever possible. We have not given up our dream of a Women's and Girls Program, but we are expanding our horizens, in the mean time. We are going to more of a Provinical/National pool of players. We will start this climb with our first ever Appearance in a Tournament this May 25 in Baltimore, Maryland in the Eastern Women's Diamond Classic. 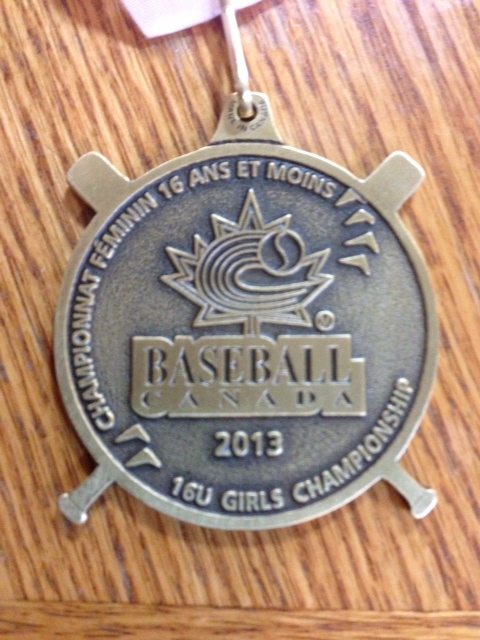 In late August, 3 Trail Blazers represented Team Ontario in the 2013 Canadian Bantam Girls Championships and came home Champions. Jessica MacPherson from Essex was a newcomer, Jessica Jeffery from Leamington was in her second Nationals and Jenna Hillman from Tecumseh, in her 3rd Nationals, won Defensive Player of the Tournament for the 2nd year in a row. These 3 Blazers led a very young team to a National Title.  All 3 girls are eligible to return Next Year for Team Ontario Bantams. 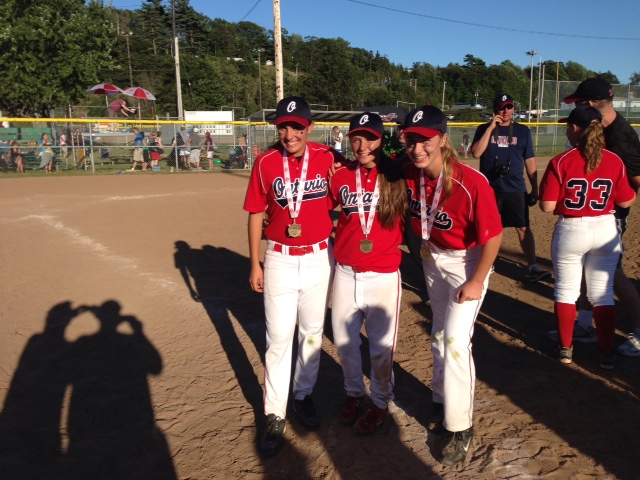 Womens Baseball in the 2015 Pan Am Games in Toronto

Women's Baseball has been included in the 2015 Pan Am Games in Toronto. 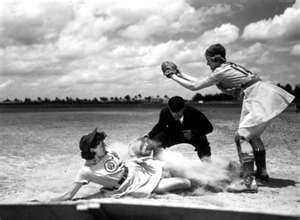 But..Only after she rounds 3rd base!

Do you ever wonder? 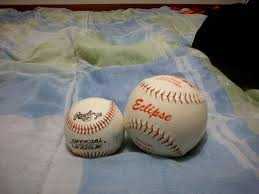 Do you ever wonder why they made women's basketball's smaller to better fit a female's hands? But at an early age we force young girls to the game of fastball to throw a bigger heavier ball.

TIME FOR A CHANGE!

Are There Any Females That Want to Play Hardball? 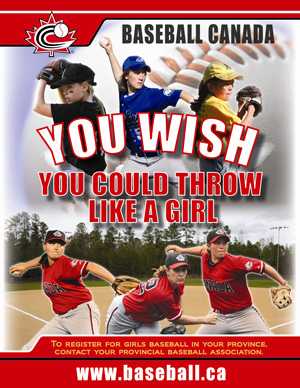 Welcome to the homepage of the Essex County Female Baseball Club. We are launching an all female baseball program here in the Windsor - Essex County area. We are offering a new and exciting program for girls, young woman and older ladies to play the game of "Hardball Baseball" against other females. In some cases, competition can be found against male teams, as well. Woman's baseball is growing all over the globe. Baseball Canada is a Major Player in the growth of Girls / Women's Baseball. This area is one of Canada's hotbeds for baseball. It only makes sense that the female population should be represented as well.

We will be adding more the website whenever we can, please continue to visit us to learn more about our program and more about woman's baseball in general. 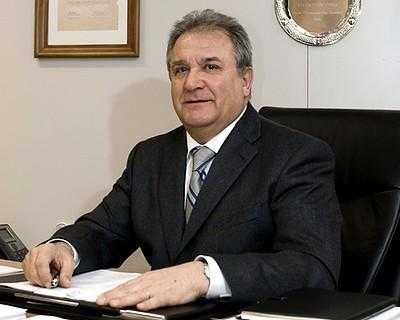 “First off, I would like to clarify that any eventual single candidature between baseball and softball for the 2020 Olympics will not undermine IBAF’s plans to sustain and develop women’s baseball. There is no doubt that women’s baseball will have to play an important role if our sport is to become truly universal. Thankfully, Women’s Baseball within the framework of the IBAF is well-positioned for growth, and as a result, the IBAF remains devoted as ever in developing baseball among female athletes of all ages.

“The IBAF International Events Calendar will be one of the most important agenda items analyzed in Panama City.  I can confirm that new projects are being examined, including the realization of a Women’s World Junior Baseball Championship. I do not want to go into too much detail during the conception phases, but it’s worth noting that there have been dialogues about organizing continental championships in order to further stimulate growth and meet the needs of all our athletes.  The Toronto 2015 Pan-Am Games Local Organizing Committee is developing a sound proposal for Women’s Baseball to be put onto that program in Toronto, and we will be paying close attention to the decision on this important matter.

“Looking into the 2012 Women’s Baseball World Cup, Baseball Canada has been awarded the rights to host this event, as this competition returns to Edmonton, the city where this event was born back in 2004. Obviously, without looking past this event, I would like to simply point out that there have already been overtures to host the 2014 Women’s Baseball World Cup, so the IBAF will need to take this into consideration as events are mapped out over the long-term.

“So this is no doubt an exciting time for women’s baseball and for women in sport in general, and the IBAF is intent on providing as many opportunities as possible to all the athletes in the international sports community and especially within our international baseball family.”

What we are looking for? 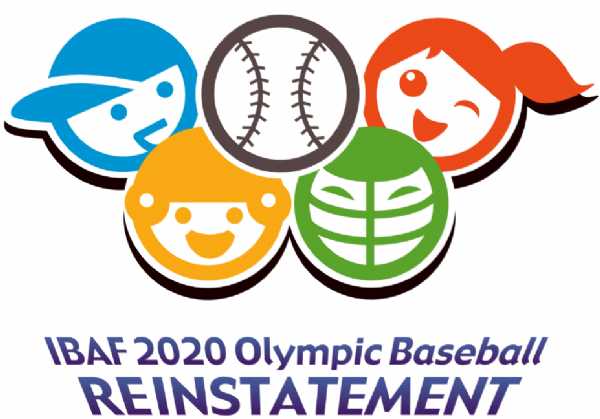 Girls / Women 13 years of age or older, who like and want to play the game of Baseball. We will be looking for a commitment but not a full time commitment. We realize most of these kids will be playing Baseball or Softball, elsewhere as we build this program. I do not wish to interfere with other arrangements, only to start and plant the roots to a program that may stand on its own one day.

We are loking to form a 16 and Under Bantam team that can compete Provincially, and a 16 and older Team (Women's Team)to compete whenever we can. Be a part of it!

If you are interested in entering your name in our database please look over to the left hand column. You will see a button for ONLINE FORMS. Click on that button and fill out the Player Information Form provided. All submissions will be sent directly to us.
Thank You

To provide females, 13 years of age and older a place an opportunity to play baseball with and against other females. As Women's Baseball continues to grow across the world, we would like to provide opportunities for the Female game to sprout, here in the Southwestern Ontario Area.