THE WESTON HAWKS AND WESTON RATTLERS HAVE MERGED AND HAVE FORMED A NEW TRAVEL PROGRAM.   PLEASE GO TO WESTONTRAVELBALL.COM OR CONTACT THE DIRECTORS AT WESTONTRAVELBALL@GMAIL.COM

HOME OF THE BEST TRAINED YOUNG MEN IN BROWARD COUNTY.   CURRENTLY 13 FORMER WESTON HAWKS PLAYERS ARE ON THE CYPRESS BAY JV TEAM  AND MANY OTHERS ON THE VARSITY TEAM AND MANY OTHER YOUNG MEN PLAYING FOR OTHER HIGH SCHOOLS IN THE WEST BROWARD AREA.  PLEASE CONTACT THE VARIOUS COACHES ON THE CONTACT LIST FOR INFORMATION AND TRYOUTS

TEAM WILL BE PROFESSIONALLY COACHED

LOOKING FOR PLAYERS AND A TEAM MANAGER

Due to poor weather conditions during the week, and a very difficult draw, the Hawks were challenged with playing 4 games on Championship Sunday.  With a 5-1 record for the Tournament, and the excitement of "Walk-offs", Shut-outs, and Home-Runs, the Hawks were able to come out Champions and made great strides towards getting prepared for Cooperstown, NY in just a few weeks.    CONGRATS TO THESE BOYS AND GOOD LUCK IN COOPERSTOWN
THE WESTON HAWKS 11U RED MANAGED BY MIKE CISCAR MADE IT TO THE CHAMPIONSHIP GAME OF THE FLORIDA PREMIER LEAGUE PLAYOFFS AND CAME UP A BIT SHORT AND THEY WERE THE RUNNER-UP, SPRING, 2017 -- CONTGRATS BOYS!!!
The WESTON HAWKS 11U BLACK managed by Jason Grey won the Florida Premier League Championship in May of 2017.   Congrats Boys and Jason and job well done.  Keep up the great work!
The 13U Hawks Managed by Lenny Schettino made it to the Championship Game in the Florida Premier League playoffs in May 2017.   It was a great game, however they did not pull it out and were awarded the Runner Up trophy.  Congrats boys and job well done! 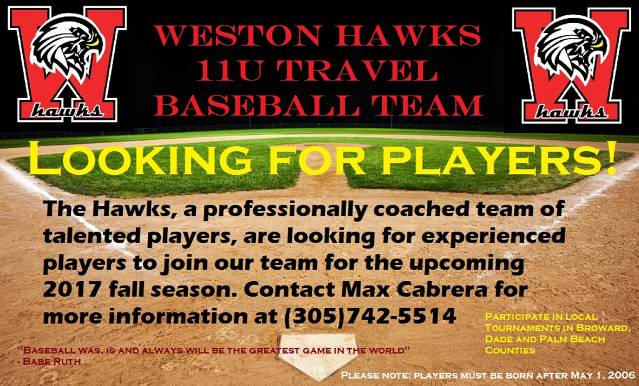 CONGRATS TO WESTON HAWKS HS DIVISION FOR WINNING THE HSBN TOURNAMENT THE WEEKEND OF JUNE 27, 2016 AND FOR QUALIFYING FOR THE HSBN BOYS OF SUMMER ELITE CHAMPIONSHIP BEING HELD THIS SUMMER.

CONGRATS TO WESTON HAWKS 11U MANAGED BY JON GOLDBERG FOR WINNING THE FLORIDA PREMIER LEAGUE CHAMPIONSHIP.  WAY TO GO!

CONGRATS TO THE WESTON HAWKS 15U HIGH SCHOOL DIVISION TEAM FOR PLACING 2ND IN THE SOUTH FLORIDA STATE CHAMPIONSHIP ON JUNE 5, 2016.

Good luck to Weston Hawks 11U managed by Mike Elrod who are heading off to the Elite 32.   A big accomplishment to qualify for this national tournament.

Weston Hawks HS have been finalist or semi-finalist in National/Regional competitive 16u travel baseball tournaments. Our team is composed of 14 and 15 year old competitive baseball players. Most recently Weston Hawks HS was part of Adidas High School Super NIT Showcase and in the Semi-Final Showcase which was televised on MLB.com.  Our two coaches have combined 16 HS State Titles  and a National World Series Title. We are adding players for this Spring Season and  Summer Showcase Tournaments. We are playing in 3  Perfect Game and one Under Armour  Showcase Tournaments. If you are interested and want to take your game to the next level and are committed, please email mattfmb1@gmail.com to schedule a private tryout.

CONGRATULATIONS TO THE 10u WESTON RED HAWKS FOR WINNING THE FLORIDA PREMIER LEAGUE AA CHAMPIONSHIP, NOVEMBER, 2015 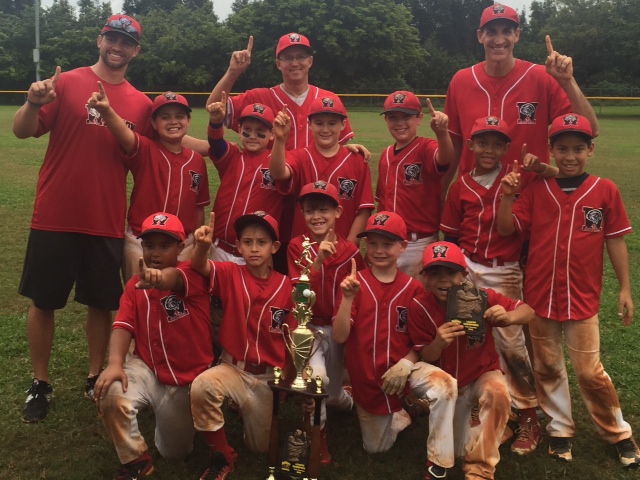 CONGRATULATIONS TO THE 14u WESTON HAWKS BLACK FOR WINNING THE USSSA PEMBROKE LAKES BULLDOG BRAWL ON NOVEMBER, 2015 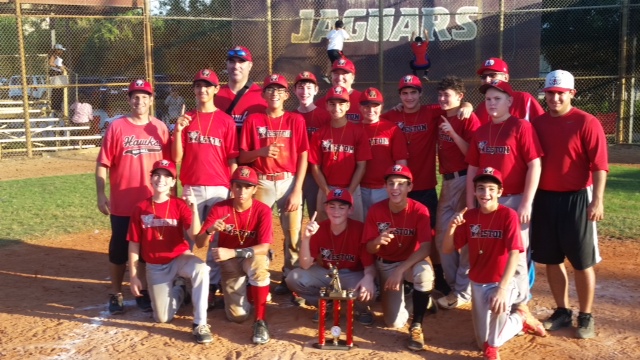 Weston Hawks Black 14U follow up with another tournament win defeating the Hollywood Heat 4 to 2 to win the Florida Premier Baseball League Open Championship, November 30, 2015 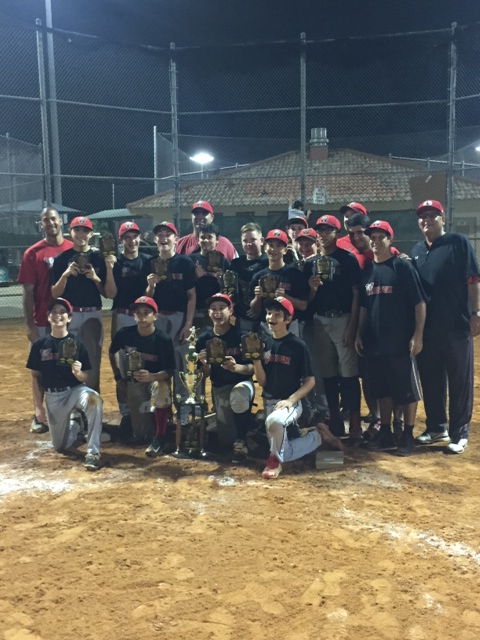 Another great year for the Weston Hawks Red 10U
After finishing with a top 10 ranking in the state of Florida USSSA & going undefeated in the regular season of the Florida Premier League. The Weston Hawks finished their 10U Season in South Carolina at Cal Ripken as the runner up in a very close championship game 2-1. 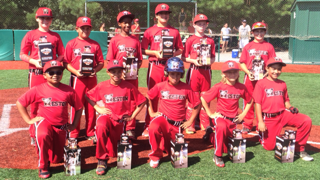 Thanks goes out to the entire Hawks Organization with special thanks going to Jay, Anthony & Cliff for all of their hard work and dedication to the program & our continued success.
Thanks again, Mike Elrod
Congratulations to the following 13U Hawks Red (Dorn) Players
Jacob Dorn NTIS Florida USA select team 2015 12u
Chris Katz NTIS Florida USA select team and  Team USA world game Gold medalist 2015team 12u
Jimmy Wilson NTIS Florida USA select team 2017 World games 14 u
These 3 players all made Florida select team which gets them to a tryout in Carey North Carolina USA training facility.
Chris Katz was selected for the final selection 12u USA world team who just won Gold in 2015 World Games.
Jimmy Wilson will be selected in 2017 World games his tryout just finished this week and he won Championship giving up 1 run in 6 innings
13U Hawks coached by Craig Dorn  Cooperstown Runner Up 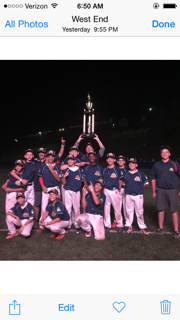 8U Hawks - The newest addition to the Weston Hawks Family consists of a talented blend of 6, 7 & 8 year olds . We have been concentrating on the baseball basics and had a strong showing for their first travel season as an 8u team.  Their young minds have absorbed tons of baseball knowledge.  Both their skill level and their baseball I.Q.'s have increased immensely!  We are looking for new talented players to join our program for the Spring.  Players may not turn 9 years old prior to June, 1st 2015. If you are interested in an exclusive try-out for your player you may fill out a player interest form or contact the coaching staff directly. Several roster spots are available for our Spring program.

9U Red Hawks – This team has been playing together for one year. They have been back to back champions of their division in the  Florida Premier Baseball league. They won the SFTBL 8U Minors Division Championship in the Fall 2013, and Spring 2014 Seasons. They are  looking for one or two talented players to round out their roster. If you are interested in a try-out, you may fill out a player interest form or contact the coaching staff directly.

10u Black Hawks -- This team has been playing together since being an 8u coach pitch team.  We are proud to say that 9 of the original 12 players, and their families, are still with this team or within the Hawks Organization.  This team uses professional coaches and therefore this  team competes at the highest level and against the best competition.  This team over the years has made the final game in 3 separate tournaments.  They participate in 3 baseball activities a week and play at Weston Regional Park and Vista Park, two of the best baseball fields in Broward County.   The 10U Black Hawks are looking forward to another successful season.


11U (Elrod) -- Our 11U Majors team plays up in the Nations Open 12U division we won the Coral Springs tournament & took 2nd n the first 2 -12U tournaments we played in.   One of theTop 11U teams in the nation.  Won numerous tournaments this year just returned from Canton Michigan where we won the Super NIT & Qualified for the Elite 32 in July

12U Black Hawks -- This team was formed one year ago, and played together for two seasons. This team placed first in its division for the Spring 2014 Season. This team has  played in four tournaments this year. They WON the Championship for the Summer Diamond Calls/ Driftwood Tournament this past June. And, at the CAL RIPKEN EXPERIENCE, they were Runner-Ups for their age group (2nd place). While at Ripken,  the team also won TWO of the THREE skills competitions offered ("Turn Two" and Home Run Derby").  The team is coached by a former Major League outfielder. If interested in joining this team, please contact the head coach directly to explore opportunities.

BUDDY BALL--Our Weston Hawks Buddy Ball Program, presently lead by the Ulino family, is made up of athletes who may have some physical, cognitive or emotional limitations, but whose love for the game of baseball has no limits!  They can be seen out at Regional Park nearly every Friday night; on the baseball field, on the basketball courts or in the hockey rinks honing their skills and perfecting their game!  Pictured below is the Ulino family and some of the participants in this program being honored by the Weston City  Commission. 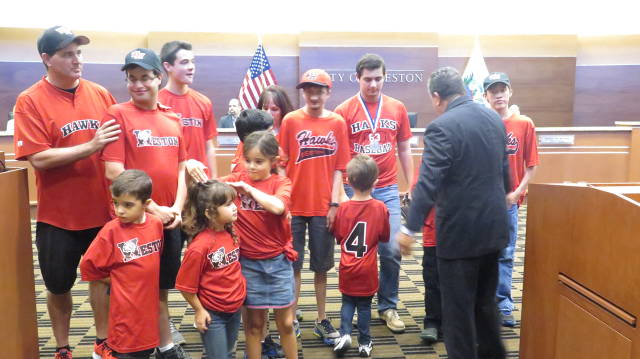 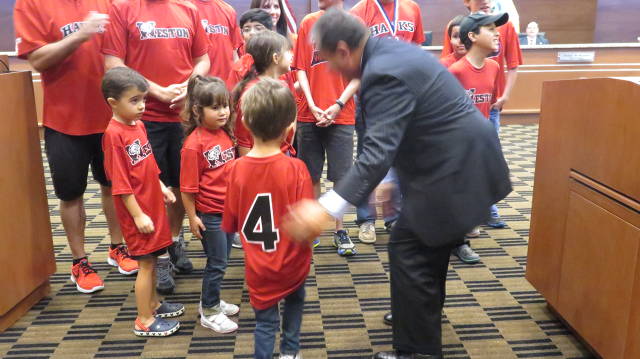