BATTLE FOR THE KEG

BATTLE FOR THE KEG 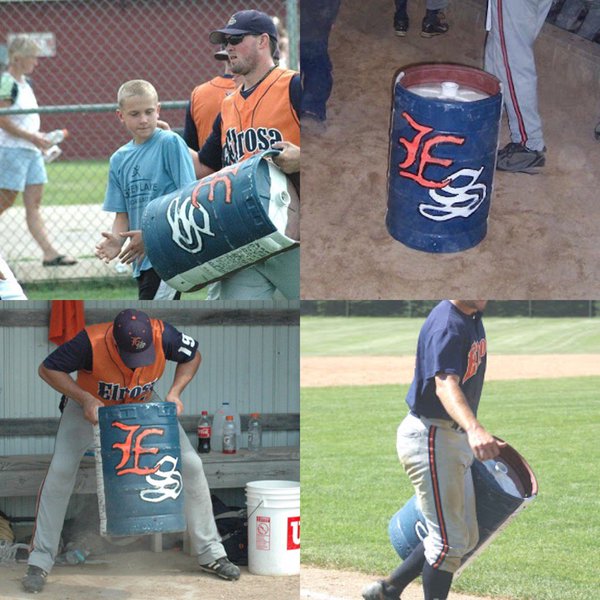 The Keg was created in 2007 because of all the "trash" that was being talked between Elrosa and Spring Hill. The arguments would commonly occur at local ball fields, weddings, gun raffles, ham dinners, family reunions, and local watering holes about who had the best ball club. Common topics in those arguments included scoop shovel gloves, buried cats, twine cutting, and forgotten equipment that ended up painted in the opposing team's colors. In an effort to stop the badgering and bullying, the two teams decided to create the Keg. Since the creation of Keg, arguments have diminished and the rivalry has grown into a central Minnesota spectacle. Some players have actually been seen at one another's weddings, baptisms, and graduation parties. The two teams play each other at least twice during the summer for the rights to the traveling trophy. There have been many memorable moments throughout the "Keg battle" including: the soap opera/reality show that is Nathan Terres and Aaron Vogt, the rolling of the keg down the Spring Hill church parking lot, the 3 day keg-napping, and the carrying of the keg on horseback by the Saints throughout the streets of beautiful downtown Spring Hill. The Keg has made appearances throughout the Upper Midwest and can be commonly found at weddings, after bars, fundraisers, parades, concerts, and bon fires. After the game, the Keg is returned to its respective town and displayed under lock and key in the establishment of choice by the winning team! 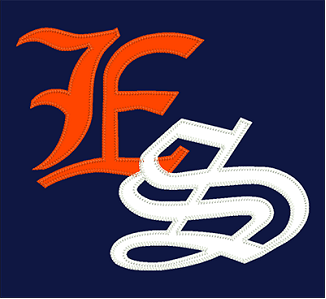 Elrosa has the Keg and it will remain in Elrosa for the Winter!

The Keg Theft of 6/22/18: The Keg once again fell into the wrong hands as first reported by the Saints ballplayers on 6/30/18. The Keg had not been under watchful eye the night the Saints once again took care of Spring Hill to maintain possession. According to a local Stearns County report, it was taken by a guy who once owned the "scoop shovel glove" and a prominent local ex-farmer and now golfer/salesman. Upon learning of its disappearance on the night of the All-Star Game, a local Saint farmer took an investigative approach to the situation and took matters into his own hands. Several days later, Spring Hill reported that their batting cage shell was missing a tire and unable to move. The Keg as returned in "good" condition and stable the day of July 4th in an unknown location as it appears many beers were consumed on this afternoon. Once the keg was returned, the tire was located, but seemed to be lacking air. As a result of the incident, the Spring Hill con-man was charged with the case of beer that was drank the afternoon of the 4th. As a direct result, Spring Hill failed to qualify for the State Tourney after limping into Regions and going 2 and BBQ. 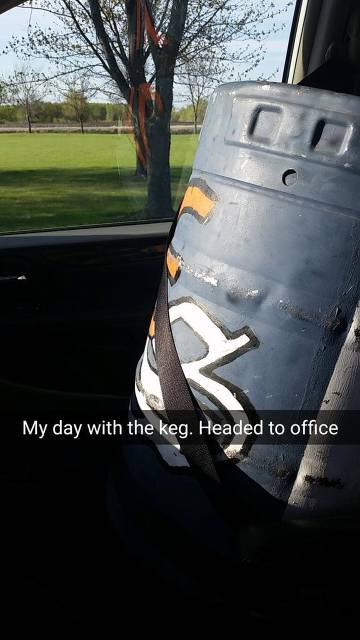 "The Chargers posted three runs on twelve hits and zero errors on the night, while the Saints posted two runs on three hits and one error. One of the cleanest played encounters of the two ball clubs has the fans wondering how the Vogt’s and Schoenberg’s showered in their time between milking cows and stepping onto the baseball field." (Spring Hill website) 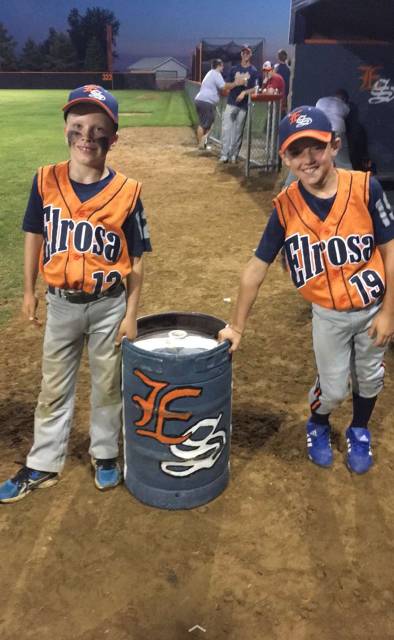 "The Keg was stolen by some local idiots from S.H. Friday night in Elrosa (and no it's not Sacred Heart). The Saints were singing Blackhawk and providing local entertainment when The Keg was taken. The Keg was held hostage for nearly 48 hours and had to withstand aggravating heat temperatures in a vehicle and in a shed.  A group of dedicated ballplayers searched the countryside for all persons involved in the keg-napping Sunday evening and through their wonderful investigative skills they finally recovered the historic artifact. Anyone having information connected with the keg-napping is asked to contact local law enforcement." (Elrosa website) 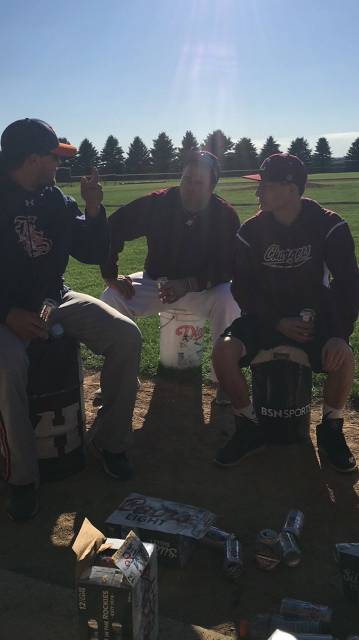 "The Chargers will be defending the safety of the keg where legend has it not only do the Vogt brothers fight with each other while milking cows, they fight with the keg as well. The confident Saints were even spotted requesting the song Keg in the Closet in anticipation of winning it back."(Spring Hill website)

"The curse of The Keg continued this weekend as S.H. failed to score a run in two games and lost both contests that they were a part of...... S.H. has been outscored 5-0 since stealing The Keg and are 0-2 since the keg-napping!" (Elrosa website)

"Tempers flared later in the game, as the two teams had their usual high intensity grudge match, making it arguably the most exciting game of the season.  Playing for a traveling keg tends to bring out the best in players, that’s for sure." (Spring Hill website)

"With the loss the keg has been taken to be stored in a dimly lit, damp, and often smelly establishment known as A-Rods Bar to ensure safety. Guarding the keg is 2 chain smoking trolls with thick glasses and outlandish stories. With the mass amount of customers served daily there, hopefully they can keep it safe this time around." (Spring Hill website) 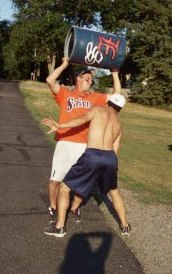 Out on the Minnesota prairie there exists a keg unlike any other.

Some say it has enough vexing power to curse a team, others make sure it appears at some of life’s biggest moments. At all times it’s something to behold and bring together the communities of Elrosa and Spring Hill for annual battles to gain possession of its decade-old contents of green beer from a St. Patrick’s Day of yesteryear.

Just 8 miles separate Elrosa and Spring Hill and during some fierce battles it might feel that it’s not enough distance between the hamlets that total 308 in population.

It seems mythology is based around some fact but let’s allow for some of the facts surrounding the keg to come through.

It is true the keg has disappeared twice and has appeared on horseback.

Some say the keg was an attempt to curb some of the trash talking between the clubs. There are those who claim arguments sprouted up at weddings, gun raffles, ham dinners, family reunions and local bars. They’d begin about baseball but veered into arguments over scoop shovel gloves, twine cutting and the mysterious disappearance of field equipment and the reappearance of the equipment painted in the rival’s colors.

The keg has rolled down the Spring Hill church parking lot and even paraded around Spring Hill on horseback by Elrosa players. It has been said to be guarded by chain-smoking trolls, though the keg wasn’t safe during a three-day keg-napping in the summer of 2014.

What makes this rivalry even more unique is that the two squads have long featured players familiar with each other since Little League. Elrosa’s roster features players who attended Belgrade-Brooten-Elrosa High School and Sauk Centre High School. Spring Hill’s roster is mainly players who graduated from Melrose. The two schools are longtime conference rivals and most of the players grew up competing against each other. Even then it was a class rivalry with a shared respect.

It took a pair of rivals becoming teammates in college to begin one of the most interesting rivalry stories in town ball. Middendorf and Elrosa teammate Ethan Vogt played at Ridgewater Community College and there they met the Terres boys -- Nate and Jamie from Spring Hill. Middendorf and Nate Terres first played together at Ridgewater and later Vogt and Jamie became teammates and led the team to the 2004-05 National Junior College Athletic Association World Series. Vogt and Jamie also played a summer with Thunder Bay in the Northwoods League.

“Growing up all the way from little league, you remember playing these guys,” Jamie Terres said.

With the friendships formed in college, it turned into something fun for the friends when they met on the diamond for town ball and to keep it interesting they added a keg.

The idea of playing for the keg began when Elrosa’s Gumby Bauer had an old keg laying around from a St. Patrick’s Day party in 2007 that some people noticed months later. An idea sprouted to create a rivalry game with Spring Hill by painting both teams’ logos on opposite sides of the keg, like a trophy game in the Big 10. The score of each meeting is kept on the side of the keg, like the jug the Minnesota and Michigan football teams play for each year. It was later found that the keg still held some beer when a ballboy pressed down on it and it sprayed green beer, Middendorf said.

With the proximity of the towns and the mutual friendships, the battle for the keg pits family and friends against each other.

Five sets of families play for Spring Hill -- there are five members of the Schoenberg family including manager Randy, four Terres boys, a pair of Bartens, Welles and Revermanns.

Though the lines on the field are clearly drawn, they tend to blur in the stands. An Elrosa player is engaged to marry a relative of a Chargers player and in the stands, people might wear a Saints shirt but sport a Spring Hill hat later in the day. The keg will likely be at the upcoming wedding as an honored guest. It’s appeared at Middendorf’s wedding and Vogt’s wedding. But things get tricky when someone who’s getting married and their club doesn’t have possession of the keg.

“They want to make sure that thing’s at their wedding,” Middendorf said. “If it’s not there it’s kind of a big deal. You never have to want to go to the other town and pay a fee to rent it.”

Appearance fees for the keg usually run a case or two of beer.

When the keg isn’t on the field it’ll be in Bucky’s Bar for winter in Elrosa. Spring Hill rotates it between the Horseshoe Bar and Extra Innings. But now both sides keep it locked up for good reason.

The keg has been stolen twice since its creation but one instance stands out. Dubbed the “keg-napping” it disappeared for three days in 2014. On a Friday the 13th, leading up to a June 16 meeting. Spring Hill held possession of the keg by way of a 6-3 win back in May. 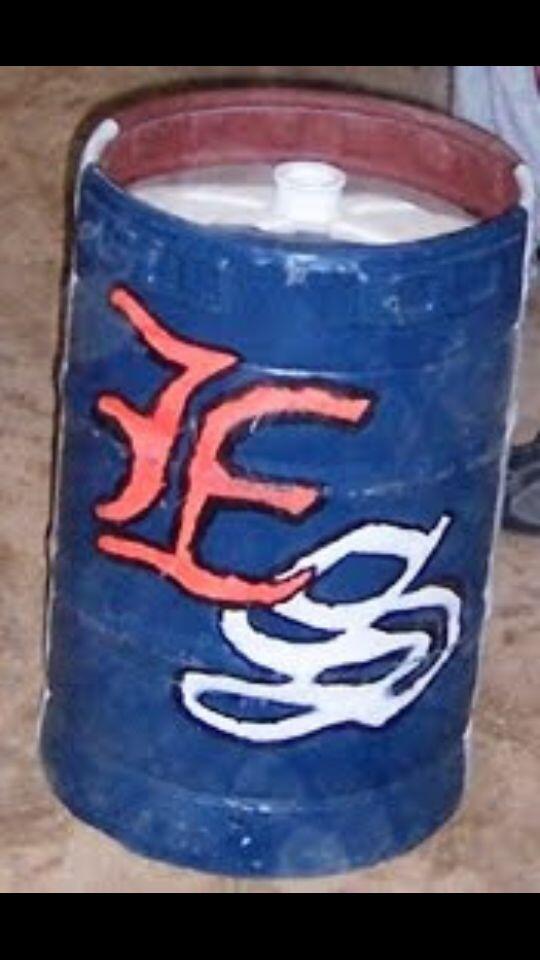 Have you seen me?

Through some deduction work the keg was later found underneath a blanket in a vehicle located in neighboring Lake Henry. Though it was found no suspects were ever identified.

“I think the consensus was we knew where it was headed,” Jamie Terres said. “It was a little bit of a rabbit hunt. We start singling out the people. When you could hear the cows in the background you knew it wasn’t [the Vogts].”

The Vogts are dairy farmers who run the family farm and milk around 200 cows.

Buoyed by the temporary loss of the keg, the Chargers won the June 16 meeting.

Theft of the keg has stopped since then because it became a bit of a curse. Spring Hill lost the next two meetings after it stole the keg. The Saints lost the game following the disappearance of the keg.

Spring Hill leads the all-time series 20-18 and own one of the most dramatic victories in the series.

In a win-or-go home region playoff game in 2015, Spring Hill scored the biggest win in the rivalry since the creation of the keg trophy with a 5-3 victory to grab a spot at the state tournament.

Elrosa advanced to this year’s state tournament and made it through its first two games before falling to Jordan. Spring Hill’s season came to a close in a 7-4 loss to Meire Grove in the Stearns County League North playoffs.

The keg meanwhile will sit in Bucky’s in Elrosa until the spring comes.

“It’s going to be a long, dark winter there,” Jamie Terres said.