Home Page of the Elrosa Saints 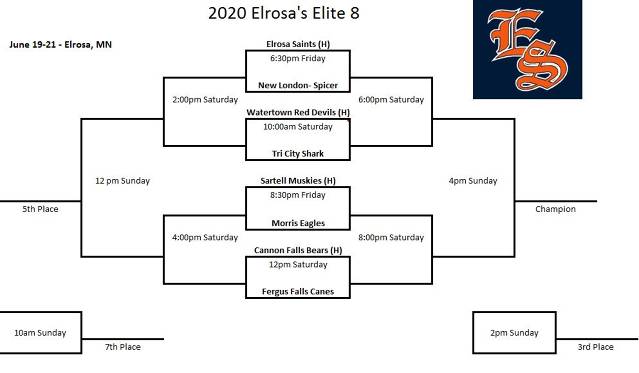 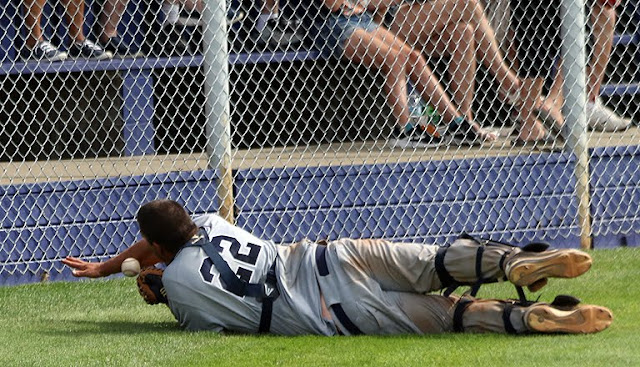 Richmond catcher Cole Schmitz gave it his best shot, but could not hold on to a foul pop-up as the Royals faced Elrosa in the Region 15C playbacks. 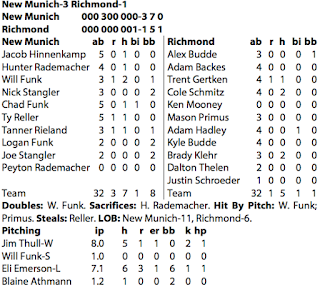 Richmond needed a ninth-inning rally to survive in the first round of the playbacks.  The score was tied 5-5 after eight innings. Elrosa had found ways to convert nine hits into five runs, and Richmond took advantage of Elrosa misplays to stay with the Saints. An error figured into the final run of the game. Kyle Budde reached on an error. Back-to-back bunt singles by Dalton Thelen and Alex Budde loaded the bases. With one out Trent Gertken singled in Kyle Budde with the game-winning run. Matt Schmitz and Ethan Vogt had two hits for Elrosa and Cody Eichers doubled.  The loss ended Elrosa's regional play. 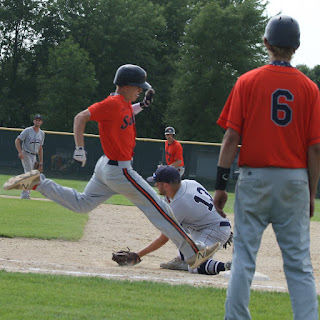 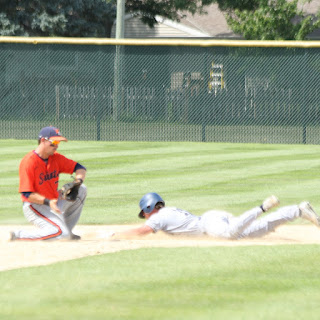 (Left Photograph) Jackson Peter’s race to first came up just a bit short as Richmond’s Kyle Budde caught the throw to retire Peter in the playoffs at Richmond.  The bunt to move up Kevin Kuefler (4) to second base. Kuefler later scored.  (Right Photograph) Alex Budde managed to reach second before the tag was applied by Elrosa’s Matt Schmitz Aug. 4 in the Region 15C Playbacks in Richmond.  Budde was credited with a stolen base. 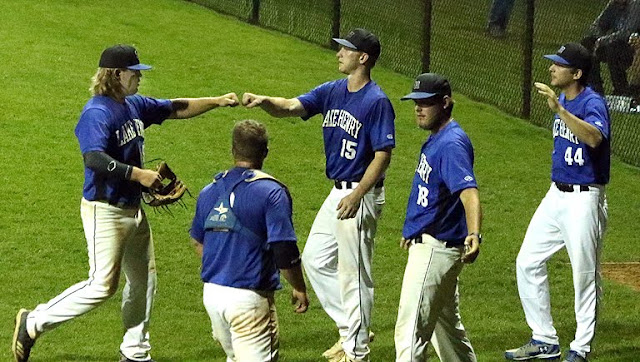 Grant Ludwig of Lake Henry received congratulations after he struck out the final batter of the game to preserve the 5-4 win for Lake Henry Aug. 2 in the win Elrosa at Farming. 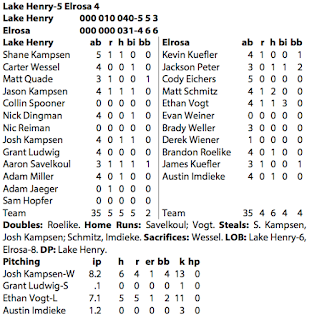 Two solid pitching efforts and home runs highlighted the 5-4  Lake Henry win. Lake Henry took a 1-0 fifth inning lead on Aaron Savelkoul’s home run. Elrosa cut into Lake Henry’s 5-0 lead on Ethan Vogt’s three-run eighth inning home run. The Lakers took advantage of four Elrosa errors and hits by Adam Miller, Jason and Josh Kampsen to score the runs. Elrosa, which had a good relief pitching effort by Austin Imdieke, had the tying run on first after walks to James and Kevin Kuefler and a rbi single by Jackson Peter. Grant Ludwig, pitching in relief of starter Jason Kampsen, struck out the only batter he faced for the save. Vogt struck out 11 and Imdieke three. Jason Kampsen struck out 13 batters. 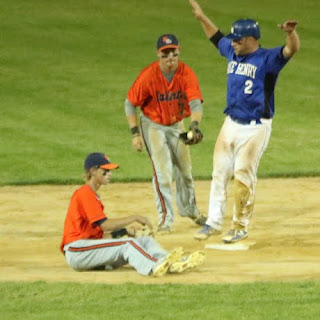 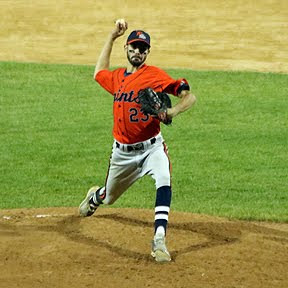 (Left Photograph) Shane Kampsen indicated he was safe after stealing second despite the efforts of Ryan Olmscheid (front) and Matt Schmitz. (Right Photograph) Austin Imdieke struck out three batters in a scoreless relief appearance Aug. 2 against Lake Henry in Farming. Elrosa pitchers struck out 14 batters in the 5-4 loss. 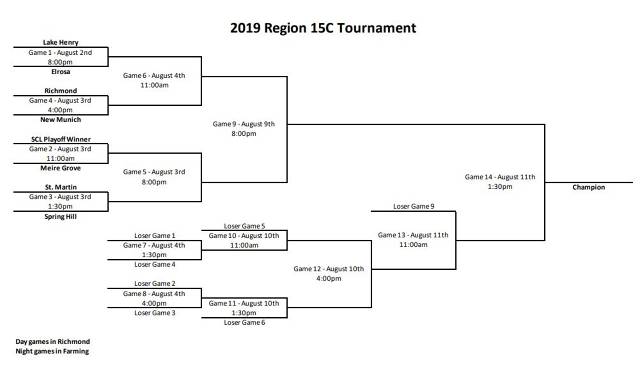 Saints Clinch #2 Seed in Region 15C with Win Over Richmond 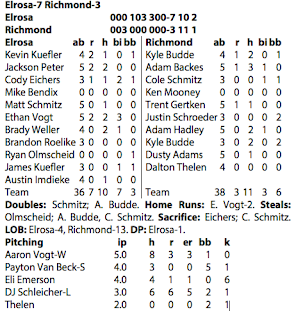 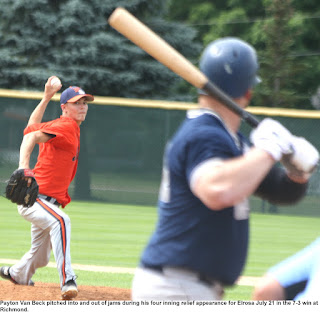 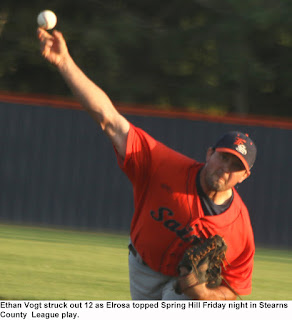 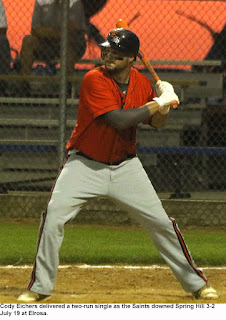 Timely hitting and a strong outing by pitcher Ethan Vogt kept The Keg in Elrosa July 19 in a 3-0 win over Spring Hill. Elrosa had eight hits with three coming in its two-run third inning. Matt Schmitz singled in Jackson Peter in the first. In the third the big hit was a two-run single by Cody Eichers. He has five RBI since returning to the line-up.  Elrosa’s only serious scoring threat after that was in the sixth when an Ethan Vogt single was followed by a Brady Weller double. Spring Hill kept threating to have productive innings, but was often stifled by strikeouts. Vogt finished with 12 Ks, five of which ended innings.  The Chargers broke the shutout bid in the ninth inning when Jamie Terres hit his second double.  With one out Eric Schoenberg singled to right and Terres, who never quit running, scored.  He was helped by a less-than-clean throw to the cutoff.  Nathan Terres also doubled for Spring Hill. The loss gives Spring Hill and 8-5 regular. Elrosa is currently 7-5 but could tie the Chargers in the standing with a win Sunday in Richmond.  New Munich, which as games July 20 at 11 a.m. in Meire Grove and 1:30 pm in Lake Henry, could also finish 8-5 on the year with two wins. Greenwald has concluded its regular season with a 0-13 record and will be in the lower seed in the upcoming SCL-playoffs 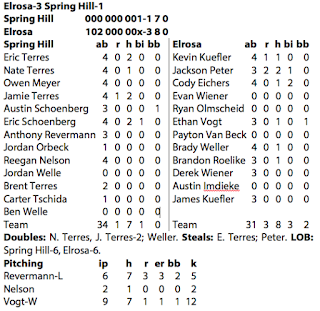 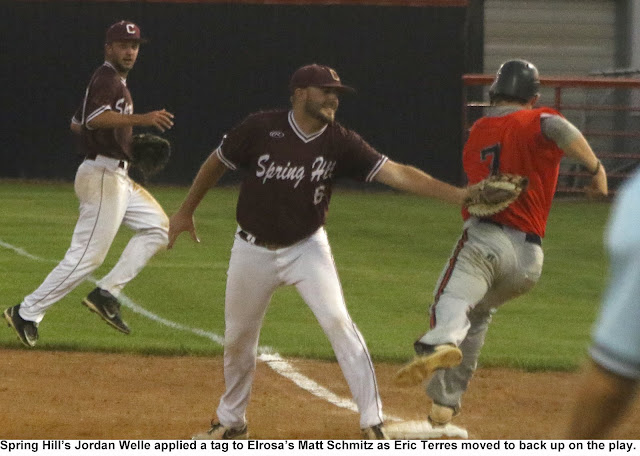 The Tool Box slows down Saints lineup in 3 Hitter 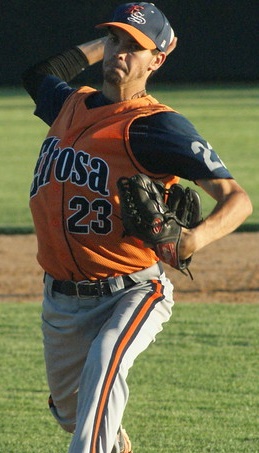 Kevin Kuefler showed back up to the ballpark after an AAU tourney over the weekend and decided to lead the Saints in the leadoff spot going 4-4 on the day. In the 1st inning, Kevin would lead off the game with a single, followed by a Jackson Peter single. Cody Eichers for the 2nd time in 3 games would turn on a first pitch and deposit it over the right field fence for a 3-Run HR. The Saints would get to Ty Reller early and often and chase him out of the game after the 2nd inning. Elrosa pounded out 14 hits on the day, lead by Kevin's 4, and Matt Schmitz and Brandon Roelike's 2. Kevin, Matt, and Ethan Vogt all had 2Bs on the day. Saints rookie Payton VanBeck also earned his 1st "hit in the book" in his Saints young career.

On the mound it was the same story we've all heard a hunert times. Aaron Vogt had a no-hitter into 5th inning, as he would allow 2 in 6 innings of work for the win. he struck out 4 and walked 2. Highlighted in the 5th inning was a 2B saving catch in the right field gap by Brady Weller. As soon as the ball was hit, Aaron Vogt said "thats a double!" but it was denied by a spectacular catch. Ethan Vogt would get the 3 inning save, allowing an unearned run, striking out 3 and walking 2, and one hit.

in the first 3 games, the bats have been clicking with 31 total hits, 12 extra base hits, and 3 HRs. Likewise on the mound. Saints pitchers have been 3-0, allowed 4 runs, 3 earned runs, all while stiking out 29 and walking just 11.

Next up for the Saints on May 19th, Sunday at 1:30 will be the home opener vs Richmond as Ethan will try and remind Kari why she married him. 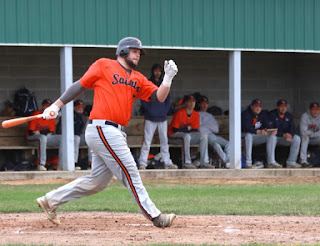 For the 7th consectutive Keg Game matchup with Spring Hill, the Saints come out on top after a 3-1 Victory in Spring Hill. Ethan Vogt would get the start on the mound, going the first 5 innings only allowing 4 hits to the Chargers. He struck out 5 while walking 2 and allowed SH's only run of the day in the bottom of the first. Aaron Vogt would come on in the 6th and shutdown the Chargers lineup the rest of the way as we worked out of a couple jams with baserunners allowed by Saints errors. Aaron picked up the win going the final 4 innings, allowing 2 hits and a walk as he struck out 7.

The Saints bats cooled down after their hot start in Greenwald, only having 6 hits on the day. None bigger than Austin Imdieke's go-ahead single in the 8th to put the Saints on top 2-1. Immy had 2 hits on the day to go along with his RBI. Matt Schmitz would follow with a SAC Fly to put Elrosa up 3-1. Cody Eichers had a 2B while getting walked 3 times, Ethan Vogt was 2-5 with an RBI single and a 2 bagger of his own. Brady Weller had the other Saints hit.

The Saints opened their 2019 Stearns County League campaign with a 16-2 drubbing of the Greenwald Cubs. Cubs pitcher Tyler Braegelman was only able to get 2 outs in the first inning as the Saints scored 9 in the first inning. Kevin Kuefler led off the game with a walk, Jackson Peter reached on a error, and Cody Eichers left off his hot 2018 season with his first long ball of the season to put the Saints up 3-0. Elrosa sent 14 men to the plate in the first, led by Eichers 2 hits in the same inning. James Kuefler would add another 3-run HR in the 5th inning.

On the day, Kevin Kuefler, Jackson Peter, Cody Eichers, and Matt Schmitz all had 2 hits as the Saints ended the day with 12 hits in 7 innings.

Ethan Vogt got the start on the mound and would go the first 3 innings as he gave up 5 hits and 2 earned runs along with 4 strikeouts. Austin Imdieke came on in the 4th and allowed 1 hit and struckout 4 as he gave way to Aaron Vogt in the 6th and &th inning. Aaron Vogt struckout 4 in 2 innings as well.

Next on tap for the local 9 is an exhibition game Friday Night May 3rd vs Dassel-Cokato in Elrosa.