See the house rules here
2017 House Rules
As a volunteer umpire for Maricopa Little League, you
will receive a shirt, a hat, an indicator, and a rule book.  In addition, you will also receive a meal after each game that you serve as an umpire. The most important and long lasting benefit is the satisfaction of knowing that you are giving back to the children of our commUNITY!

Balls/Strikes, Fair/Foul, Safe/Out calls are judgement calls by the umpires on the field and are not up for discussion or argument by coaches/players or spectators.

Many of our umpires are teenagers doing the very best they can and have no interest in who wins/loses a game.

Any questions regarding MLL Umpires, please contact the MLL Umpire in Chief at UIC@MARICOPALITTLELEAGUE.COM 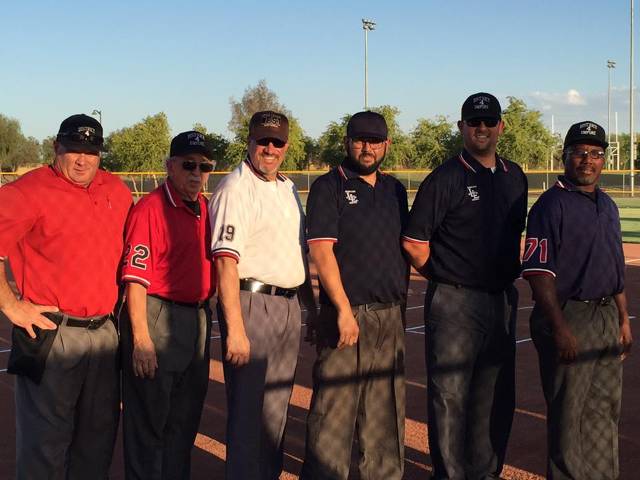 4 of our own umpires from Maricopa.

The batter does not get first base if hit by a pitch after it bounces.

Reality:  When a pitch bounces, the only things that change are:

Other than that, the pitch is still alive and in play, and all the standard rules about whether the batter is awarded first still apply.

The following is a true story

I am an umpire.  I don't do it for a living, but only on weekends for fun. I've played baseball, coached it and watched it.  But somehow nothing takes the place of umpiring.  Maybe I feel deep down that I am providing a fair chance for all kids to play the game without disagreement and arguments.  But there is one thing that bothers me about my job.  Some of you folks don't understand why I'm there.  Some of you feel I'm there to exert authority over our sons.  For that reason, you often yell at me or encourage our sons to yell when I make a mistake.  How many of you really understand that I try to be perfect?  I try not to make a mistake.  I don't want your sons to feel he got a bad deal from an umpire.  Yet, no matter how hard I try,  I can't be perfect.  I counted the number of calls I made in a six-inning game today.  The total number of decisions on balls, strikes or safes and outs was 146.  I tried my best to get them all right, but I'm sure I missed some.  I could have missed eight calls today and still got about 95% correct.  In most occupations that percentage would be considered excellent.

Let me tell you more about my game today.  There was one close call that ended the game.  A runner for the home team was trying to steal the plate on a passed ball.  The catcher chased the ball down and threw to the pitcher covering the plate.  The pitcher made the tag and I called the runner out.  As I was getting my equipment to leave, I overheard one of the parents comment.  "It's too bad the kids have to lose games because of rotten umpires.  That was one of the lousiest calls I ever seen."  Later, at the concession stand, a couple of kids were telling their friends, "Boy, the umpires were lousy today.  They lost the game for us."  Well, I heard that and I felt terrible. Those kids had made a lot of mistakes, which had cost them runs.  A parent or adult leader who lets a child blame his failures on an umpire is doing the worst kind of injustice to that youngster.  That irresponsibility is bound to carry over to future years.

As I sit here writing this letter I am no longer as upset as I was this afternoon.  At one point I wanted to quit umpiring behind the plate for a pitcher who pantomimed his displeasure at any close call.  One could sense that he wanted the crowd to realize that he was a talented player who was doing his best to get along, but that I was a black-hearted villain who was working against him.  This kid continued for two innings, at the same time yelling at his own players' mistakes. For two innings the manager watched this.  When the kid returned to the dugout to bat in the top of the third, the manager called him aside.  In a voice that I was able to overhear, he said: "Listen, Son it is time you made a decision.  You can be an Umpire, an actor or a pitcher.  But you can be only one at a time when you are playing for me.  Right now it is your job to pitch. And basically you are doing a lousy job.  Leave the acting to the actor, the umpiring to the umpires or you won't do any pitching here."

Needless to say, the kid chose the pitching route, and went on to win the game.  When the game was over, the kid followed me to my car.  Fighting to keep back the tears, he apologized for his actions and thanked me for umpiring the game.  He said that he had learned a lesson that he would not forget.  I can't help but wonder how many more young men are missing their chance to develop into outstanding ball players because their parents encourage them to spend time umpiring, rather than working harder to play the game.

Donald Jenson wrote this letter while lying in a Hospital bed after he was struck in the head with a thrown bat earlier during the above-mentioned game.  He finished the game and because of head pains was admitted to the hospital and kept overnight for observation. Donald Jensen, part-time umpire died of a brain concussion resulting from the thrown bat.

OUR UMPIRE-IN-CHIEF AT THE 2013 LITTLE LEAGUE SOFTBALL 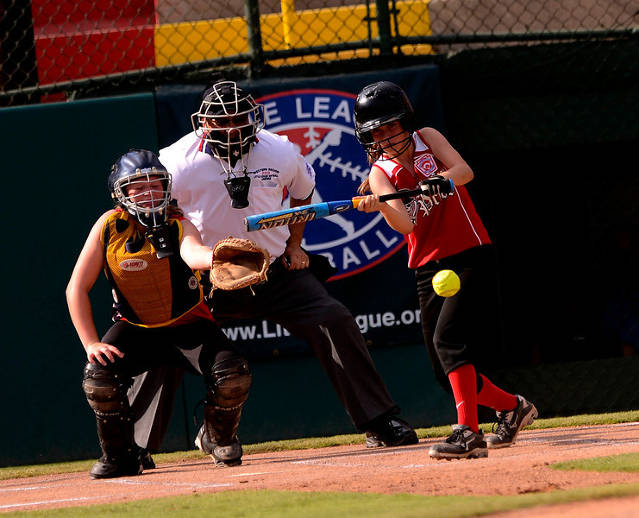 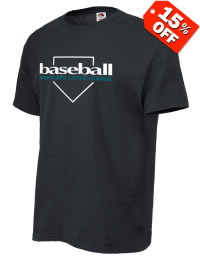 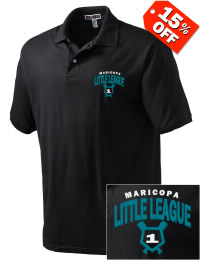 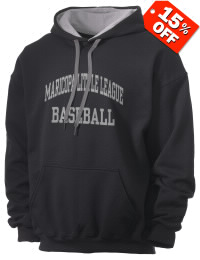