In the Summer of 1968 John J. Obrien was a member of the Swarthmorewood Braves baseball team. He played catcher and outfield for his team. The previous fall John was Co-Captain

and Offensive/Defensive end for the 95 lb football team. He was someone who would always encourage teammates to try just a little bit harder and he always give 100% effort in

everything he did. He was an honor student at Notre Dame de Lourdes and would always offer to help his classmates to improve their grades. John would help neighbors with yard

work in the summer and shoveling snow in the winter. He would never accept money for these chores; he did them because he wanted to help people.

In June of 1968, John and some of his friends got together to play baseball. During the game, the bat they were using broke and John volunteered to ride his bicycle home to get a

bat. On the way he was struck by a car and was hospitalized in a coma. The next few days, friends, and teammates attended mass praying John would come out of his coma. They would

talk about John and one by one they realized how he had a positive impact on each one of their lives. A few days later,, John was gone.

Citizenship, Leadership, Cooperation, Courage, Sportsmanship and Ability. These were the characteristics that John lived by every day.

To honor him the John J. O'brien Award was established. It is given to the athlete who day in and day out exhibits these traits that we should all live by.

It is an honor to receive this award. It speaks to the quality of the individual who receives it. Share with your sons and daughters this story so that it may live on. If we all

live by the example set by John we will have a stronger Association, Neighborhood and Community.

Below is a list of previous Ridley Raider Youth Football recipients. 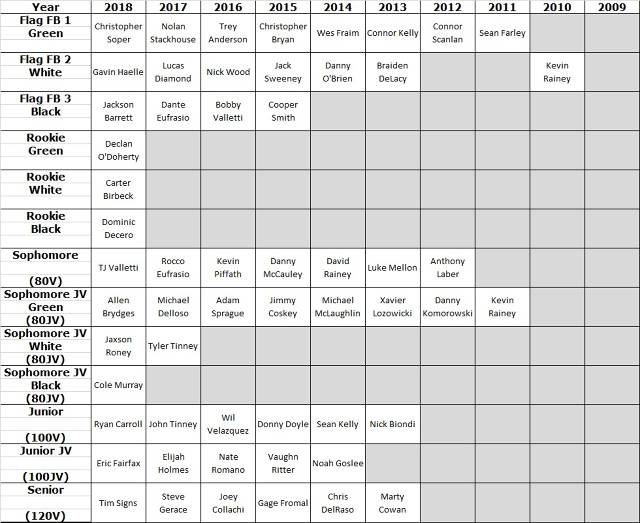