Rivers had a banner senior year for the state champion Wildcats.  Besides being named Honorable Mention All-NWOC -- an honor Coach Chris Roche said could have been 1st Team All-NWOC instead based on his play -- Rivers became an instrumental part of the Wildcats successful '18-19 state championship season, starting for the team all season long, becoming a defensive stopper, shooting a high percentage and making plays for others.

"Zach had a banner senior year for us," said Roche.  "He made huge strides from his junior year... He came into this season hungry and urgent, and he played with a force that was real.  Zach could impact a game on the defensive end of the floor, and he embraced the challenges our team gave him.  He is a really good passer, handles the ball well, and he has improved greatly finishing around the bucket and in the open court.  There is no doubt his contributions were instrumental to our success and our ability to win games this past year."

Rivers was also tough.  He finished the year with a broken bone in his leg, and an elbow injury that required surgery.  Those injuries are now healing up.

"Zach's trajectory in basketball is upward," added Roche. "He has a chance, if he continues to work on his game and gets stronger, to improve much more.  He's a very good player, but an even better kid.  I think he will do very well at Clark, and we will all be rooting for him." 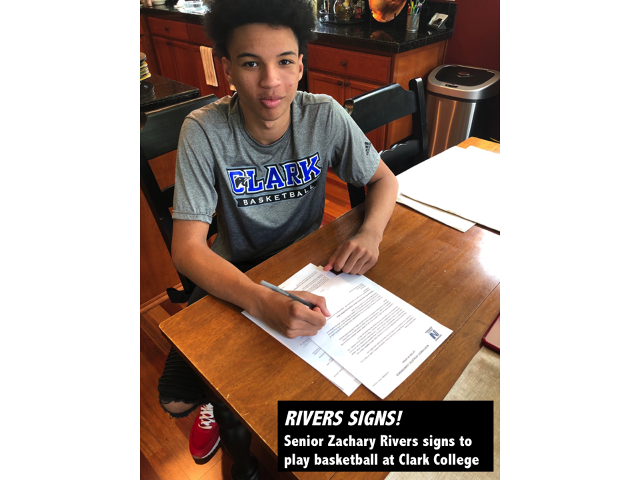