See below for full season web pages by team...

Welcome to the home of the Lady WolfPack 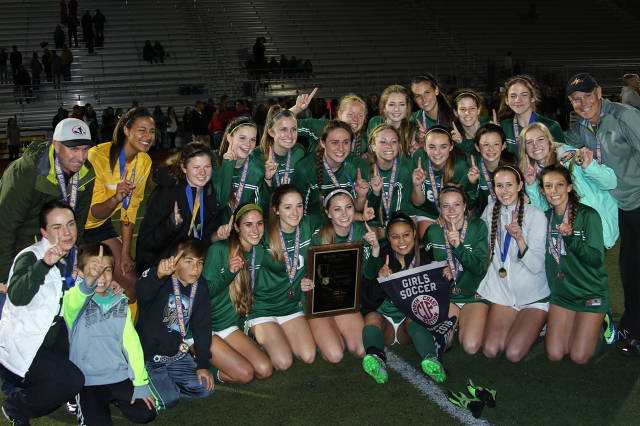 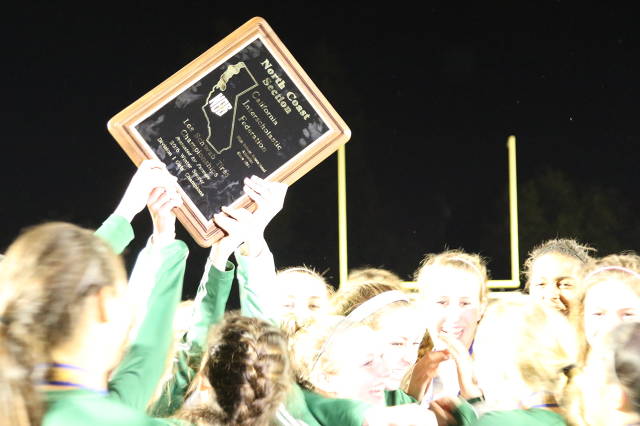 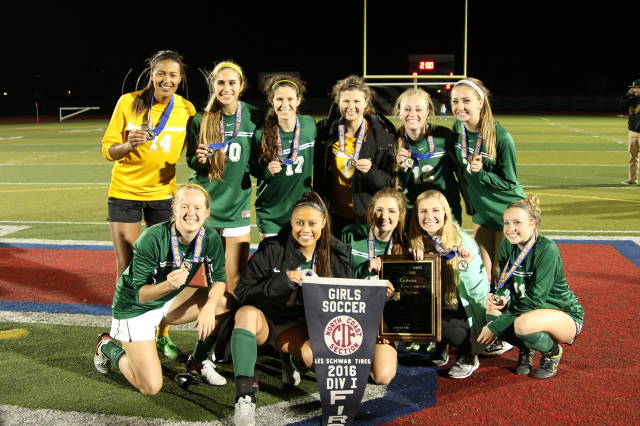 And the NCS Champs went to DISNEYLAND!! 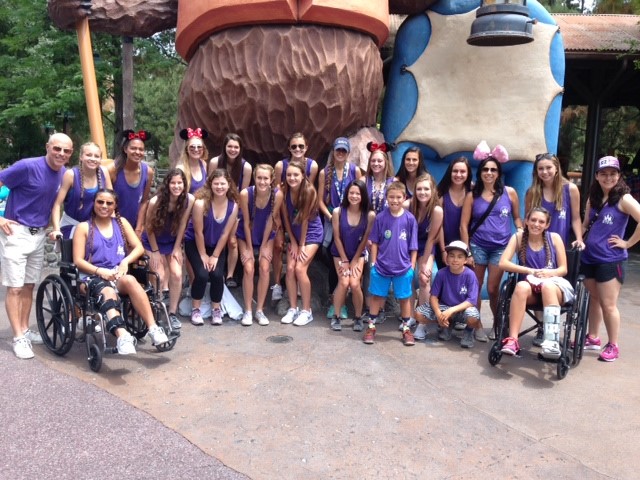 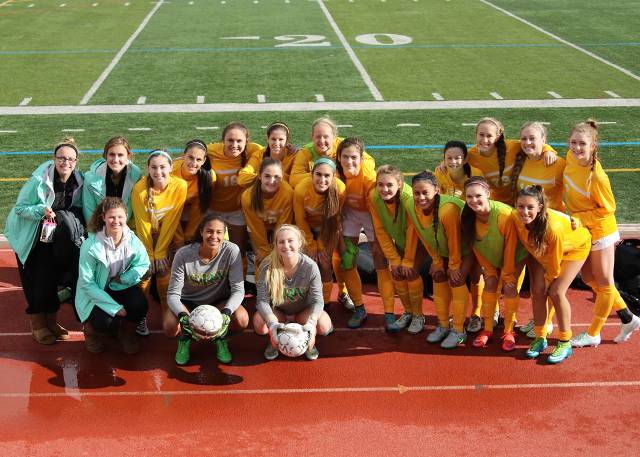 2.21.16
The Wolves have just completed week one of NCS playoffs with two strong victories. SRV came into NCS as the #2 seed and had to first face #15 Dougherty Valley in game 1. This was a game for the record books where weather was concerned, with rain downpours throughout the match! The stands were filled umbrellas and the players on the field were drenched head to toe. That did not stop SRV from coming on strong however, pushing through the wet and cold conditions  to put up a final score of 4-0!
Saturday night brought much better weather for game 2, SRV vs. #7 seed Foothill. Foothill continues to be a strong opponent, holding a lot of the control the first half of the game. However, the Wolves stayed strong, and never gave up on opportunities, eventually finding the net twice, to advance themselves on to the next round of NCS play. Fantastic game Wolves!!

02.11.16
This week brought the end of regular season play, and things could not have been more different this time around! The weather was polar opposite for SRV and Foothill than it was during their first meeting. Foothill  also showed up with a more aggressive drive on the field than they showed the  Wolves previously. This was a great match up, with both teams putting points on the board. In the end, SRV pulled through the tie to grab the 2-1 victory.
SRV celebrated their last game of the season by honoring the Senior Wolves at senior night. The Wolves also presented roses to their Senior Mustang friends in a wonderful pre-game ceremony. Friendships were put on the bench during the game however, as a physical MV team fought hard for a repeat victory. Unlike their last match up however, one of the many shots SRV took finally found the net! As pressure escalated for MV to answer back, SRV held a strong defense and walked away with the win that always feels the sweetest! Great game girls!

"If you can laugh together, you can work together" - Robert Orben
Wolves know how to have FUN! A bit of dress up, school spirit, laughing, lots of SNACKS!, dancing, little sleep, and a few adventures go a long way each year in making the Lady Wolves a closer and stronger team. 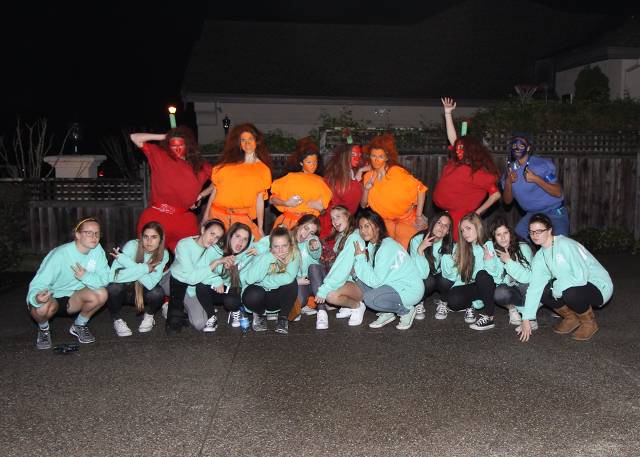 It was a week of GREAT SOCCER for three teams whom always give each other a challenge, and share a longstanding rivalry. First game of the week had the Wolves in Mustang territory, but Green came out strong! San Ramon definitely controlled the game during the first half, with numerous shots that just couldn't find the net. Second half had Monte Vista coming out with more fire and drive than they showed first half, so we had ourselves a game! MV capitalized on an SR mistake, and found themselves with the 1-0 victory. The week wasn't nearly over when SRV then traveled to meet up with Carondelet! And what a fantastic game that was by both teams! Goals were split by both the Red and the Green, with the final score ending in a 2-2 tie. The end was not without excitement however, when a late shot by SR, from a shallow angle  with seconds left in the game put the ball dangerously close to a third goal. Would've been a great ending!

01.08.16 HAPPY NEW YEAR!
The start of the new year was a good one for SRV! The rain paused for Tuesday's game vs. Amador, as the Wolves found themselves back on the field after a two week winter break. The game was full of offense for SRV, as shot after shot was saved by Amador's keeper, whom certainly deserves credit for keeping the Dons in the game. Eventually the Wolves found the net on a header, and held on to a 1-0 lead to close out the game. Thursday's game had SRV facing a physical group in the Granada team. The Wolves kept their fans in suspense as they waited until the last two minutes of each half to put a point on the board, for a final win of 2-0.

12.17.15  TRI-VALLEY CLASSIC
Week 2 of the season brought the annual Tri-Valley Classic to the schedule. This is a premier high school tournament hosted by both SRV and MV, drawing competition from throughout the NorCal area and as far south as San Diego! The Wolves went 3-0 with some exciting game play throughout the weekend...a good foundation for the start of the season! Enjoy your holiday break girls and we will see you in 2016!

12.13.15 HOLIDAY GIFT EXCHANGE
No better way to kick off a season and socialize with new teammates than a gift exchange! Laughs, undies, food, new practice kits and friends made it a great time! 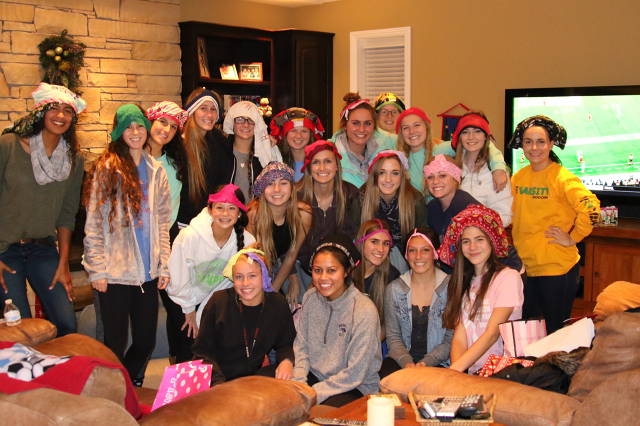 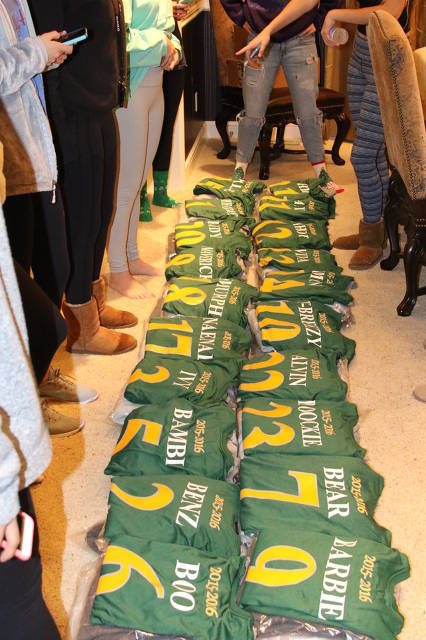 As fans of high school soccer know...an outside winter sport can be a cold and wet season. The Wolves were certainly off to a winter start as their first league game against Livermore High School was one full of rain and lightning, after over an hour delay in game start time! The Wolves scored early in the game with a combination starting from the back, through the mid, and resulting in a beautiful finish up top. Livermore did not leave that goal unanswered however, and scored on a hard strike on the ground after a corner play put the ball at the top of the box. Both teams would leave frustrated, without the chance to put a win in the books, as lightning ended the game with 16 minutes left on the clock. Hopefully this isn't a sign of the season's weather to come!

for the Fourth Straight Year!

Lady Wolves Finish the First Half of the Season Undefeated!

The Lady Wolves started the season off on a high note. For their first game, they traveled to Pittsburg and came home with an 8-0 victory!  Next up was the Liberty JV Tournament. The Lady Wolves had won the previous three titles, and were hungry to add another.  Taking all they had learned from their first game as a team, they went out and wrapped up the Liberty Tournament with a record of 4-0-0! In addition to the undefeated record, they kept three clean sheets and outscored their opponents 16-1! It was a great base to build on going into the tough EBAL JV season.

The EBAL season started with a literal bang!  Warm ups in the thunder and lightning sent the girls running for cover. But once the rain stopped and the game started the girls picked right up where they left Liberty, with a win. The team then faced a tough opponent in Carondelet in a game that could have gone either way, but ended up a 0-0 tie. What a way to enter the Winter Break: 6W-0L-1D; 27 GF, 1 GA.

The Lady Wolves faced Amador Valley, Cal, Granada, Foothill and rival Monte Vista over a span of two weeks. All five opponents threw the book at the team, and the team responded to everything thrown at them. Great goalkeeping from Megan and Jenn ran the clean sheet tally up to 11 and they currently have eight straight clean sheets! Stellar defending kept the keepers out of trouble, while the link up play between the mids and forwards created many scoring opportunities. Goals from an array of forwards, defenders and midfielders (truly a team effort!) enabled the Lady Wolves to win the final five games of the first half of the season. Final record of the first half of the season: 11-0-1!

Can't wait to see what the second half of the season has in store! Bring on Carondelet on Thursday!

FROSH Wolves end the tournament with 2 wins and 1 loss.

California just squeaks by the Wolves 1-0