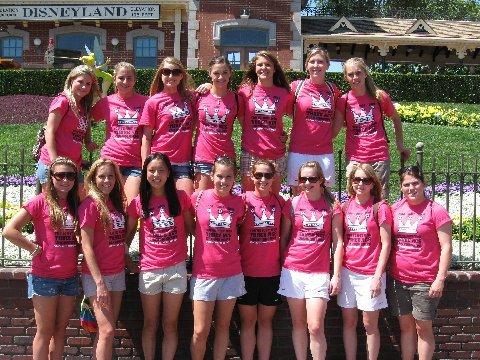 THE NCS CHAMPS GO TO DISNEYLAND!

Many thanks to CHRIS SCOTT for these wonderful photos he submitted
to the Danville Weekly.  Additional photos from SRV's playoff matches
and the NCS Championship are available at Calsportsphoto.com 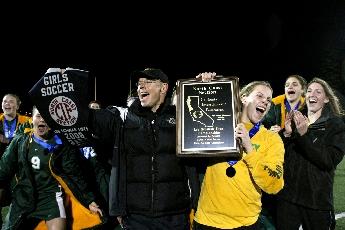 The Lady Wolves ruled the den Saturday night as they became the first winter soccer team in 20 years to win three straight NCS championships. SRV beat Foothill High in the NCS final, 2-1, after a hard-fought match that went to double overtime and penalty kicks.

The Wolves ,who have become accustomed to starting their season as underdogs, have thrived on the challenge under Head Coach Mark Jones. This is his third year as varsity head coach. 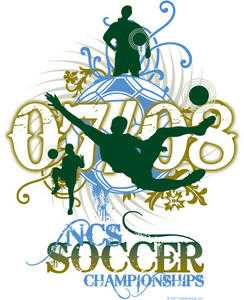 "MARK JONES, YOUR TEAM JUST WON THEIR THIRD STRAIGHT NCS CHAMPIONSHIP,
NOW WHAT ARE YOU GONNA DO?" 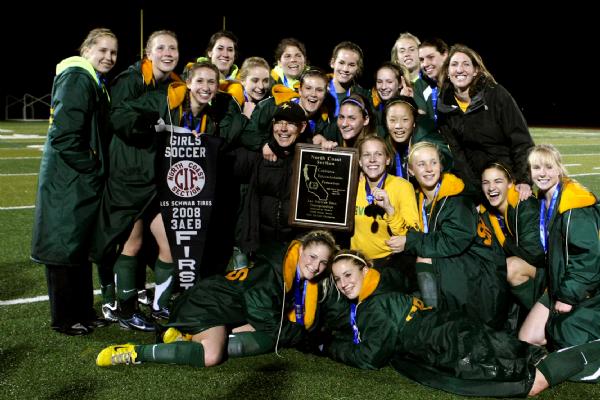 2/23/08 - Tonight was a magical night for SRV as the Wolves became the first (winter soccer) team in 20 years to win 3 straight NCS Championships!  SRV beat Foothill High in the NCS Final tonight 2-1, after a hard fought match that went to double OT and PK's, with the Wolves prevailing 2-1.   (SRV also beat Monte Vista in the 2007 Championship match 2-0, and won the 2006 crown vs. Foothill 1-0).
Congratulations to a very talented Foothill team on a well-fought match and all of their accomplishments this season!
The Wolves who have become accustomed to starting their season as "underdogs", have thrived on the challenge under Coach Mark Jones!  They play each season with all their heart as they set out to win the crown each year.  The Wolfpack gives their all for each other and for the best coaches in the Valley!  Congratulations to Mark, Mel and all the girls on this truly amazing accomplishment!  It is one for the record books!
Jones has been the Varsity Head Coach for 3 years now and he really needs to step up and get a little success under his belt!
Our Seniors celebrate their last high school game
along with SRV's 3rd straight CHAMPIONSHIP!


2/20/08 DANVILLE  - There was something crazily familiar about the San Ramon win over Danville rival Monte Vista in the semifinals at Monte Vista on Wednesday.
Familiar, but with more than a few twists.

For the second straight year, the two-time NCS defending champion Wolves (15-5-6) upset the Mustangs (18-3-5), coming out of a lower seed to knock Monte Vista from the playoffs.

Last winter, the Wolves were seeded No. 5 and beat the No. 3 Mustangs 2-0 in the final to claim the NCS crown.

This time, the Wolves entered the playoffs seeded No. 6 and beat the No. 2 Mustangs to move on to the final.

2/7/08 - The highly touted MV offense couldn't get past the defending NCS CHAMPIONS' mighty defense Thursday night in front of the mostly green and gold crowd at MV.  While the ponies outshot San Ramon, Natalie took care of any golden opportunities they had.  The Wolves had several scoring opportunities of their own, even down to the final minutes, but failed to convert and had to settle for a 0-0 draw in their last league game of the season.  The SRV green and gold spirit was as evident as always!  Many thanks to supporters who decorated the visitor stands, and to the entire girls' JV soccer team who stayed to support their fellow Wolves, the mens' (2008 EBAL CHAMPION) Varsity soccer team who came out to cheer the girls on and presented them with roses, as well as to all the parents, grandparents and friends who came out to show their support!
Congratulations to Coach Mark and his Wolves on another successful and enjoyable season! With just two 1-point losses in league, SRV finishes with 15 points, behind Cal High and Foothill who both had 16 points, and MV with 20.
Great work girls!
The Back-to-Back NCS Champion Wolves look forward to repeating with
strong NCS performances for a third straight year!

Chris Scott who does an amazing job shooting photos of our girls every year
has uploaded an extra large gallery from the Feb 7th SRV/MV game.
All photos are available for purchase through calsportsphoto.com:
http://www.printroom.com/ViewGallery.asp?userid=CSPN&gallery_id=975006&curpage=1

POP, POP, POP....
2/6/08-Things were poppin' at the Armstrongs on Wednesday night as the Wolves celebrated Mardi gras with a pasta feed!  The carbo load helped the girls gear up for their final league match vs. Monte Vista Thursday night, 2/7. Many thanks to the Armstrongs, Ledfords and Edwards for hosting the fun event!  Joanne and Chelsea, you guys are great party planners! 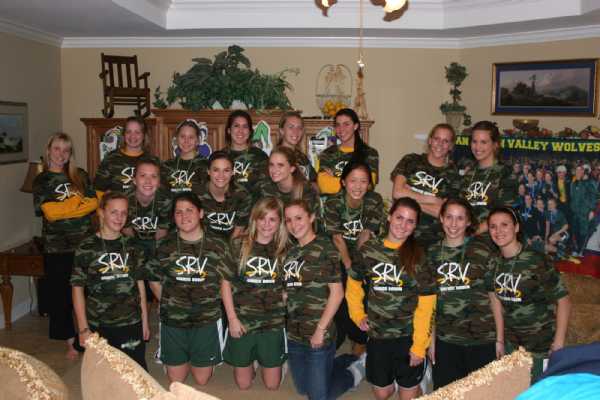 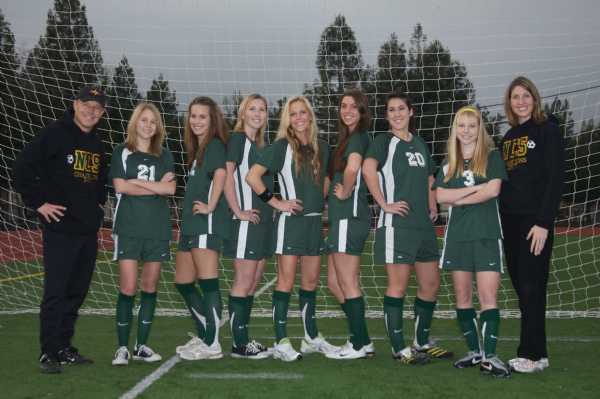 Seniors Rachel, Alyse, Katie, Nat, Jen, Brittany and Jillian
SENIOR NIGHT
1/29/08 - SRV's Seniors were our stars of the night as they were recognized for their soccer and academic accomplishments before Tuesday night's game vs. Foothill. Congratulations girls!  In the Seniors last home game, the Falcons put a damper on the night scoring early off two corner kicks and holding on to beat the Wolves 2-1.  SRV's goal was scored by Grace Leer, assisted by Katie Pedlowe.  SRV moves into a tie for 3rd place in the EBAL with Cal High.

http://trivalleyclassic.com
2007 TRI-VALLEY CLASSIC TOURNAMENT
So Cal's Torrey Pines takes home this year's TVC Championship after meeting four strong Nor Cal teams & beating SRV, Foothill and MV each 1-0, and tying Archbishop Mitty 2-2.  MV had a chance to bring the TVC title back to Danville after Torrey Pines lone goal in regulation was negated and their match went on to PK's.  Torrey Pines resecured their win when MV missed 2 of their shots.
Other SRV scores: Wins 2-1 over Bishop O'Dowd and 3-0 over Nolan Catholic, and a loss to Sacred Heart 3-1.
SRV is a 3-time Tri-Valley Classic Champion and looks forward to this event each year! Many thanks to all of those who put on this fun, competitive tournament each holiday season! 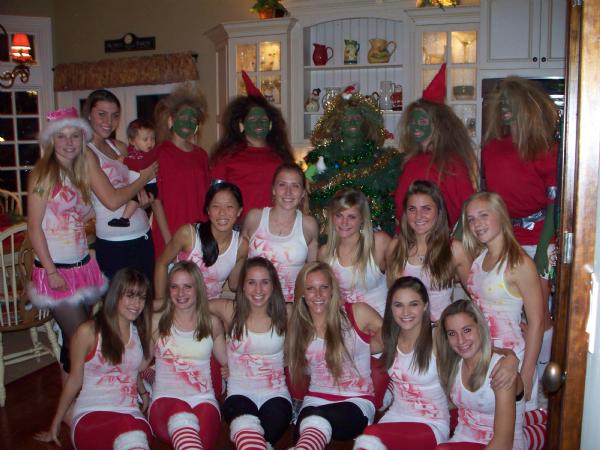 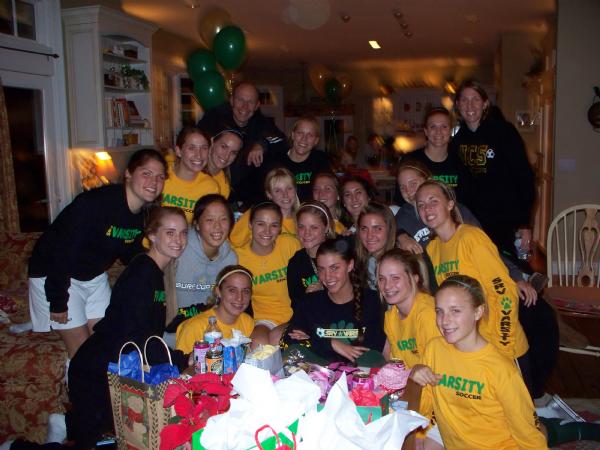 Coach Mark Jones embarks on his 3rd season as the Wolves' Head Coach with 2 consecutive NCS Championships, an EBAL Championship, a Tri-Valley Classic Championship, an NCS Coach of the Year Recognition and a #1 nationally ranked team to his credit.  Coach Jones returns 6 seniors, 3 juniors and 5 sophomores and a wealth of talent!
Seniors Jillian Armstrong, Rachel Cole, Natalie Johnston, Alyse Ledford, Jen Nordine, and Katie Pedlowe return for their final campaign and look to help their team thrive on the emotion from last season and defend their 2007 NCS title!
Surf Cup MVP Junior Amanda Glass will add super strength to the back line while Junior forwards Hillary Harvey and Katie Travis will bring their quickness and skills to help the Wolves score! The return of 2007's "Fab Five" Sophomores Ashley Edwards, Mackenzie Laird, Grace Leer, Julia Schleimer and Allie Tao bring their outstanding experience from last year into the mix to round out a solid team!

Wolves in the News

Johnson gave up just one goal in the Wolves’ 2-1 win over Monte in the NCS 3A semi-finals.  In the championship match, she limited Foothill to one goal in regulation to send the match into overtime.  In two overtime periods, she gave up one goal but blocked three shots in a shootout to lift the Wolves to a third straight title!

2/26/08
SRV has never been a team that focuses much on polls and rankings throughout their season,  but are honored
to see Studentsportssoccer.com acknowledge the accomplishments of their amazing season and a most impressive (3rd consecutive) NCS title!  In StudentSportsSoccer.com's "Fab 50 Girls Winter Soccer Rankings" SRV is ranked #13 nationally and #7 in the Western region for Girls Winter Soccer programs.
More Congratulations Wolves!

2/26/08 -No doubting it, Wolves are a tough pack
By Dennis Miller, STAFF WRITER
IT'S UNCANNY — really. Perhaps the Whistle's colleague at the Hayward Daily Review summed it up best when he said, "I will never, ever, bet against the San Ramon Valley girls soccer team in NCS again."  Read entire article at:
http://www.insidebayarea.com/search/ci_8366150?IADID=Search-www.insidebayarea.com-www.insidebayarea.com 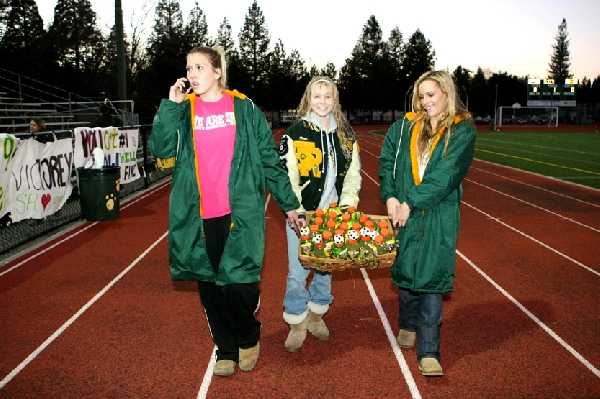 Girls varsity soccer players lug out the refreshments for the boys team in celebration of Seniors Night.
Photo by Chris Scott/www.calsportsphoto.com.